Probability Distribution - which to use Normal or Hypergeometric

Good evening everyone, I am attempting a self-study question on probability and am faced with one which really quizzed me.

A study found that a family typically spends between \$500 and \$4500 a month on expenses. Suppose the money spent is uniformly distributed between these amounts. If we randomly select 10 families, what is the probability that at least two families spend more than \$3000 a month on expenses.

My approach to this question is that I present

I then proceed on to form a normal distribution as follows: 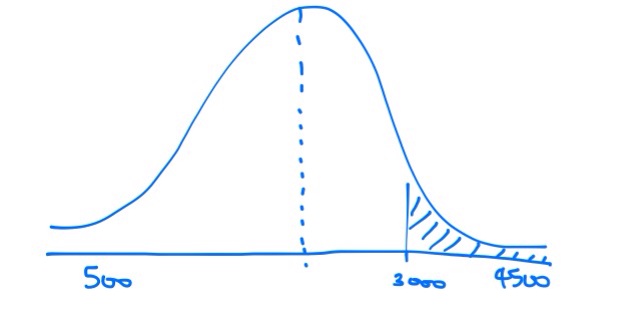 I was thinking of using the Hypergeomatric distribution for this, but also thought that the normal distribution made sense. I am just puzzled how to move on.

From what I understand, the normal distribution never touches the X-axis, so that will mean that it will be hard for me assert that 500 - 4500 is the range, and thus I was skeptical to convert it to the standard normal.

Thanks everyone. I've attached my working with the corrected numbers. Now I understand the rationale behind the workings above. :) 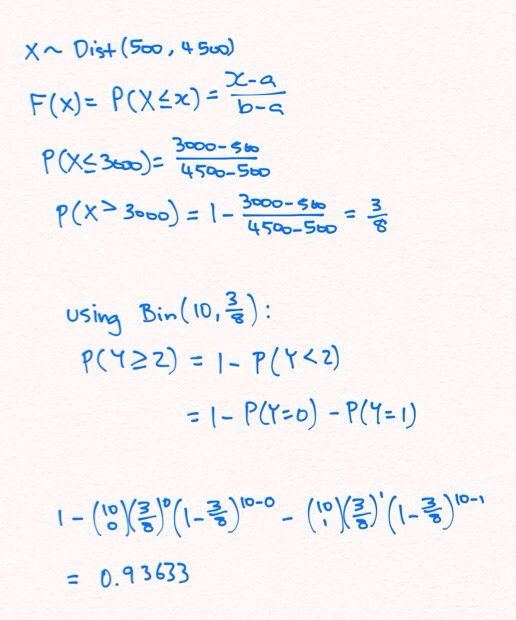 Although the correct answer is given, I'll give you some hints and a thought process here that may help you understand why the answer turns out the way it does.

The most important thing to arrive at the correct answer is to realize that you should be using the Binomial Distribution. How to see this?

Now, using the same naming conventions, we say that a family which expenses exceed \$3000 is a 'success' (remember, this is just a naming convention to be consistent with the language of the wikipedia article;)). The probability of 'success', denoted p in the article, is thus the probability that a uniform random variable on $[500,4500]$ is larger than 3000.

Not the answer you're looking for? Browse other questions tagged self-study normal-distribution hypergeometric-distribution or ask your own question.