I have a feeling this is a standard problem in categorical inference but unfortunately, I do not know what to Google for. In the following, I present some of the thoughts I've had about the problem.

Naïvely, one might assume that $$ P\left(X=x|N_1,\ldots,N_l\right) = \frac{N_x}{N}, $$ where $N=\sum_x N_x$ is the total number of observations. However, the observations are imperfect such that the probability that the true label is $x$ is non-zero even if $N_x=0$ (all observations might have been incorrect).

Suppose that each observation is an independent Bernoulli trial which succeeds (assigns the correct label) with (known) probability $q$ and fails (assigns the wrong label) with probability $1-q$ . Applying Bayes' theorem I find $$ P\left(X=x|N_1,\ldots,N_l,q\right) \propto P\left(N_1,\ldots,N_l|X=x,q\right), $$ where I have assumed that the prior over true labels is uniform. The likelihood function (and thus the posterior for $x$ given $q$) is binomial such that $$ P\left(X=x|N_1,\ldots,N_l,q\right)\propto q^{N_x}(1-q)^{N-N_x}. $$

In general, the reliability of the observations $q$ is not known a priori. Consider the graphical model in the figure. White circles denote variables; grey boxes denote distributions. 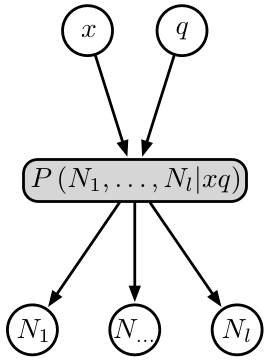 In principle, I should be able to sample the parameters using a Gibbs sampler because I have the conditional distributions. Unfortunately, I cannot recover the parameters for simulated data. Any help would be very much appreciated.

Some observations: if you have more than two classes ($l>2$), your model is not well-defined. If $l=2$, your model can be interpreted as a reparametrization of the standard beta prior + binomial observation model.

Issue with $l>2$: distribution of wrong label not defined

Not the answer you're looking for? Browse other questions tagged bayesian categorical-data or ask your own question.