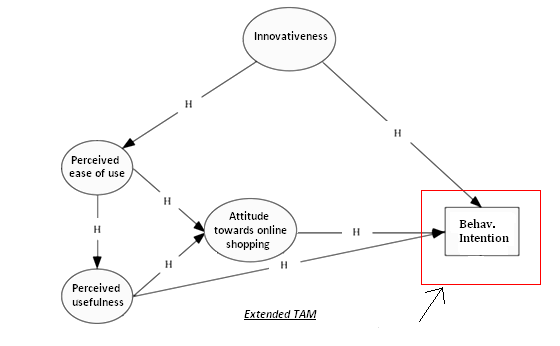 I am using an Extended Technology Acceptance Model and have adopted an instrument from a research paper. After performing factor analysis in SPSS, most questions related to different constructs (attitude, perceived usefulness, etc.) are shown in the same factor.

The variables Attitude, Perceived ease of use, Perceived usefulness & Innovativeness are different but if a respondent agrees to my statements for Perceived usefulness with STRONGLY AGREE then he is also likely to answer for statements related to attitude with STRONGLY AGREE since there is a positive effect (theoretically and based upon lit. reviews) between all these variables in the model.

What should I do if respondents are answering everything as STRONGLY AGREE or AGREE?

Technically it is right, but how can I get my factor analysis results right? Excluding the dependent variable (Behavioral Intention) it should make 4 factors.

After then I've got to learn Amos (as per my supervisor instruction) for analysis. I need guidance in easy wordings. I'm no good in SPSS and not familiar with Amos.

There are a lot of implicit questions in here, it's not absolutely clear to me what you're asking. However, there's one explicit question:

"What should I do if respondents are answering everything in STRONGLY AGREE or AGREE?"

Sorry if this isn't very helpful, but I think you need to rephrase your questions, to ensure that you don't get the same answer from everyone. Here's a (slightly flippant) example: Most people like their doctors. If you ask a set of questions, such as: My doctor cares about me. My doctor is knowledgeable. Etc, and you ask people to respond on a similar scale, you'll often find that the vast majority will strongly agree, and most of the rest will agree. You don't know who thinks their doctor is better, and who doesn't. One solution is to change the scale:

My doctor is: A) OK B) Good. C) Very good. D) Excellent. E) The best doctor I've ever met. F) I really can't imagine that there is a better doctor out there.

Finally, I'd strongly advise against trying to learn to use AMOS if you're not very good at SPSS. Structural equation modeling is hard. It's very hard to learn from a book, if you possibly can, take a class.

This sounds like a ceiling effect, and it's a potentially major problem. It sounds like you have Likert ratings for dis/agreement with various statements, and strongly agree is your highest rating option. These are ordinal data, and probably also grouped continuous data, in that they presumably represent a latent continuum that has been binned into as many groups as you have response options (see Anderson, 1984).

If many of your respondents are using the maximum response options invariably, you'll have a tough time estimating their real level of agreement relative to other respondents, because as @JeremyMiles says, you don't have much information there. Possible problems include:

If this is only a problem with a modest subset of your sample, you might consider detecting and excluding these participants systematically. I had a lot of invariant responding in my dissertation research, which involved a survey full of Likert scales. In consultation with my former advisor, I established a simple criterion for excluding participants who responded the same way to every item on indices with at least ten items and multiple subscales. This was less than 15% of my sample, but enough to warrant action. Leaving in bad data from respondents who showed no evidence of thought in their choices can bias results, especially when those cases are multivariate outliers with high leverage in regression analysis.

If this is a problem throughout your sample, you may have larger design problems that make your data intractable. If you have a small sample, you may not be able to afford the power loss from excluding cases, even on a per-index basis as I did. If you have a large sample, you may be able to accommodate varying degrees of response bias by using methods suited to the ordinal nature of Likert ratings. I have discussed some of these options in answers to several questions, including:

A simple recommendation to take from the above that ought to be doable in Amos is to produce a polychoric correlation matrix of your item data (after excluding invariant respondents, if practical) and fit the structural equation model to this (instead of an ordinary covariance matrix). Weighted least squares estimation is also recommended (Wang & Cunningham, 2005), if available in Amos.

Not the answer you're looking for? Browse other questions tagged spss factor-analysis structural-equation-modeling exploratory-data-analysis confirmatory-factor or ask your own question.