The probability density function of an Exponential($\lambda$) variate is, as shown in the question, given by

Joint densities give probabilities via integration: to find the probability of an event $E$, you integrate the density over the set $E$: 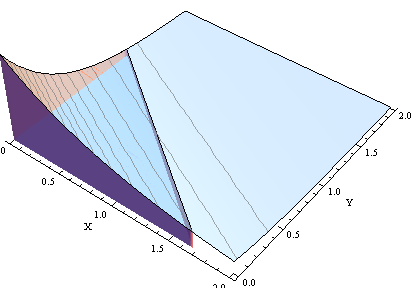 (The gray curves are contours of the graph of the joint density. Because the density does not change when $-x-2y$ is held fixed, these contours are all curves of the form $-x-2y=\text{ constant},$ which are portions of parallel lines all perpendicular to the vector $(-1,-2)$.)

Working it out is elementary and not very instructive (but do it anyway to make sure the result is reasonable this time: partial steps in this direction appear in a duplicate thread on the Math site). The key thing to learn and remember is how to use joint densities to represent probabilities; the rest is part of the rote branch of Calculus. It might also be useful to remember that this kind of problem can be solved from first principles with relatively little work and the help of a simple sketch: you multiply (the marginal densities) and integrate the result over the event in question. It's always a good idea to draw a picture of it. The figure is a good summary of the general procedure.

2
Probability of having real roots
1
Waiting time for the first event in an Exponential Distribution with different rate parameters
7
CDF of $\frac{X_1X_2}{X_1+X_2+a}$, where $X_1$ and $X_2$ have exp. distributions
8
Wikipedia Proof About Minimum of Exponential Random Variables