If true is that because of the central limit theorem?

Normality assumption of a t-test

Consider a large population from which you could take many different samples of a particular size. (In a particular study, you generally collect just one of these samples.)

By the central limit theorem, means of samples from a population with finite variance approach a normal distribution regardless of the distribution of the population. Rules of thumb say that the sample means are basically normally distributed as long as the sample size is at least 20 or 30. For a t-test to be valid on a sample of smaller size, the population distribution would have to be approximately normal.

Here are some simulations you can run in R to get a feel for this. First, here are a couple of population distributions.

For a t-test to be valid, these histograms should be normal.

Utility of a t-test

I have to note that all of the knowledge I just imparted is somewhat obsolete; now that we have computers, we can do better than t-tests. As Frank notes, you probably want to use Wilcoxon tests anywhere you were taught to run a t-test.

The central limit theorem is less useful than one might think in this context. First, as someone pointed out already, one does not know if the current sample size is "large enough". Secondly, the CLT is more about achieving the desired type I error than about type II error. In other words, the t-test can be uncompetitive power-wise. That's why the Wilcoxon test is so popular. If normality holds, it is 95% as efficient as the t-test. If normality does not hold it can be arbitrarily more efficient than the t-test.

See my previous answer to a question on the robustness of the t-test.

In particular, I recommend playing around with the onlinestatsbook applet.

The image below is based on the following scenario:

Whether you consider this robust depends on your perspective. 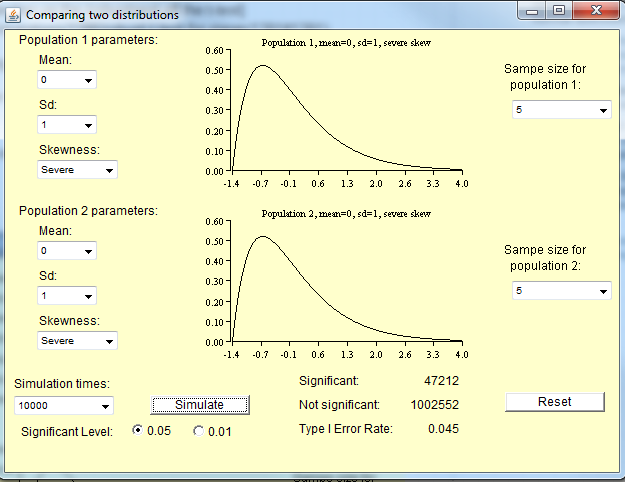 For example, suppose you were playing the lottery. With probability $p = 10^{-4}$ you will win 100 thousand dollars, and with probability $1-p$ you will lose one dollar. If you perform a t-test for the null that the mean return is zero based on a sample of one thousand draws of this process, I don't think you are going to achieve the nominal type I rate.

edit: duh, per @whuber's catch in the comment, the example I gave did not have mean zero, so testing for mean zero has nothing to do with the type I rate.

Because the lottery example often has a sample standard deviation of zero, the t-test chokes. So instead, I give a code example using Goerg's Lambert W x Gaussian distribution. The distribution I use here has a skew of around 1355.

The central limit theorem establishes (under the required conditions) that the numerator of the t-statistic is asymptotically normal. The t-statistic also has a denominator. To have a t-distribution you'd need the denominator to be independent and square-root-of-a-chi-square-on-its-df.

And we know it won't be independent (that characterizes the normal!)

Slutsky's theorem combined with the CLT would give you that the t-statistic is asymptotically normal (but not necessarily at a very useful rate).

We would want a theorem that would establish that the t-statistic is approximately t-distributed when there's non-normality, and how fast it comes in. (Of course, eventually the t- will go close to the normal as well, and in that sense we will often tend to get about the right significance level, at least in sufficiently large samples for all these effects to "work" sufficiently for our individual requirements.)

However, more important than the purported level-robustness of the $t$ (at larger sample sizes) is the effect on its power. Note that the asymptotic relative efficiency of the t-test relative to the Wilcoxon-Mann-Whitney (for example) may be 0 (i.e. as sample sizes become large while effect sizes you want to pick up shrink, you may require vastly larger samples for the t to have the same power as an obvious alternative).

So while the t-test may end up having a nice normal-looking null distribution in many cases if $n$ is large enough, its performance under the null isn't really what people care most about -- it is the performance under the alternative -- and there it may not be so great, if you care about rejecting the null in cases where the effect is not so easy to pick up.

Yes, the Central Limit Theorem tells us this is true. So long as you avoid extremely heavy-tailed traits, non-Normality presents no problems in moderate-to-large samples.

The Wilcoxon test (mentioned by others) can have terrible power when the alternative is not a location shift of the original distribution. Furthermore, the way it measures differences between distributions is not transitive.

As a test of means or medians, the Wilcoxon–Mann–Whitney (WMW) test can be severely nonrobust for deviations from the pure shift model.

These are the recommendation of the authors of the paper:

The rank transformation can alter means, standard deviations, and skewnesses of the two samples differently. The only situation in which the rank transformation is guaranteed to achieve a beneficial effect is when distributions are identical and sample sizes are equal. For deviations from these rather strict assumptions, the effects of the rank transformation on sample moments are unpredictable. In the simulation study of the paper, the WMW test was compared with the Fligner–Policello test (FP), the Brunner–Munzel test (BM), the two-sample T test (T ), the Welch U test (U), and the Welch U test on ranks (RU). The four rank-based tests (WMW, FP, BM, and RU) performed similarly, although the BM test was frequently a little better than the others. When the sample sizes were equal, the parametric tests (T and U) were superior to the rank-based tests under the null hypothesis of equal means, but not under the null hypothesis of equal medians. When the sample sizes were unequal, the BM, RU, and U tests performed best. For several settings, small changes in population properties led to large alterations in the performance of the tests. In summary, the large sample approximate WMW test can be a poor method for comparing the means or medians of two populations, unless the two distributions have equal shapes and equal scales. This problem also seems to apply in various degrees to the exact WMW test, the FP test, the BM test, and the Welch U test on ranks. When using the WMW test, the authors recommend that the properties of the ranked samples are thoroughly investigated for signs of skewness and variance heterogeneity. If such effects are present, the Welch U test is preferable in many situations.

0
T-test or Mann-Whitney U test
0
Is the t-test really robust to shape of distribution?
367
Is normality testing 'essentially useless'?
131
How to choose between t-test or non-parametric test e.g. Wilcoxon in small samples
46
What is the difference between finite and infinite variance
32
Why does basic hypothesis testing focus on the mean and not on the median?
18
Robust t-test for mean
26
Have the reports of the death of the t-test been greatly exaggerated?
14
Why is t-test more appropriate than z-test for non-normal data?
7
When does the amount of skew or prevalence of outliers make the median preferable to the mean?
See more linked questions

4
Which test to choose when the results from t-test and Wilcoxon test are different?
9
When is the distribution of $(\overline{x}-\mu)/{\rm SE}(\overline{x})$ normal and when is it $t$?
4
Why isn't the sample distribution of r normal?
12
Central Limit Theorem and t-test
3
t-test for a non-normal population
14
Why is t-test more appropriate than z-test for non-normal data?