Do I miss something on Fisher's method or p-values?

The way that Fisher's approach measures the combined effect of p-values is to effectively look at their product (the ordering of possible statistics when adding the logs is the same as when taking the product). It then asks whether this is unusually low compared to what you'd find with random p-values when the null is true (which would be draws from a uniform distribution in that case).

In the product, very small values "pull down" the value more than very large values push it up (compared to a typical value). A large probability can't be above 1, but a small one can be very small indeed.

By that product metric, a product of many 0.5's is unusual compared to a product of random uniform values. If your results were really showing nothing, you should really see some small p's in there, but you don't have any. By collecting a lot of 0.5's you're basically getting into the 'even less discrepant than randomness' territory ... which still wouldn't cause you to reject, of course. 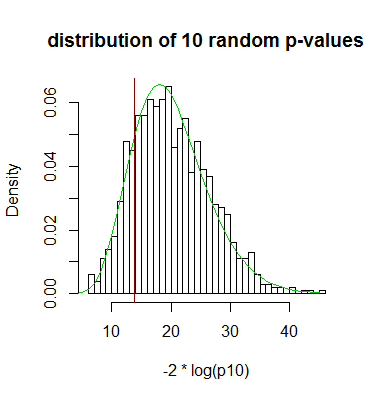 Note that large values - values in the right tail - are highly significant. The set of ten $0.5$ values is well into the left tail, so they don't indicate significance.

While Fisher's method has much to commend it (not least that it makes a lot of intuitive sense to work with a product of independent p-values), there's nothing actually sacrosanct about that metric. You could, for example, add p-values, and compare that sum to the distribution of a sum of random p-values. By that metric, a lot of p=0.5's would give you a value right in the middle. (There are many other ways one might combine p-values. I mostly just go with Fisher, though, it usually captures what I want a "combined p-value" to capture.)

Not the answer you're looking for? Browse other questions tagged p-value python combining-p-values or ask your own question.

6
Fisher's method of combining p-values when one of the p-values is zero
3
Distribution of p-values from multiple experiments
24
Stouffer's Z-score method: what if we sum $z^2$ instead of $z$?
3
Combining very small p-values - Fisher's method gives 0
1
Confusion regarding p-values and false discovery rate
1
Do p-values assume an unlikely event has already happened?
5
Why does Fisher's exact test produce the same p-value regardless of my predictor variable?
4
Problems with Fisher's Method for combining p-values
13
Does p-value ever depend on the alternative?