What criteria must be met in order to conclude a 'ceiling effect' is occurring?

According to The SAGE Encyclopedia of Social Science Research Methods…

[a] ceiling effect occurs when a measure possesses a distinct upper limit for potential responses and a large concentration of participants score at or near this limit. Scale attenuation is a methodological problem that occurs whenever variance is restricted in this manner. … For example, a ceiling effect may occur with a measure of attitudes in which a high score indicates a favorable attitude and the highest response fails to capture the most positive evaluation possible. …The best solution to the problem of ceiling effects is pilot testing, which allows the problem to be identified early. If a ceiling effect is found, [and] the outcome measure is task performance, the task can be made more difficult to increase the range of potential responses.1 [emphasis added]

There seems to be lots of advice and questions (and here) dealing with analysing data which show ceiling effects similar to that described in the quote above.

My naive approach would be to just examine the distribution skew and if it's not skewed, conclude that there is no ceiling effect. Is that overly simplistic?

To add a more concrete example, say I develop an instrument which measures some latent trait x which increases with age but eventually levels off and starts to decline in old age. I make the first version, which has a range of 1—14, do some piloting, and find that it seems there may be a ceiling effect (a great number of responses at or near 14, the maximum.. I conclude this just by looking at the data. But why? Is there any rigorous method of supporting that claim?

Then I revise the measure to have a range of 1—20 and collect more data. I see that the trend more closely matches my expectations, but how do I know that the range of measurement is large enough. Do I need to revise it again? Visually, it seems to be ok, but is there a way of testing it to confirm my suspicions? 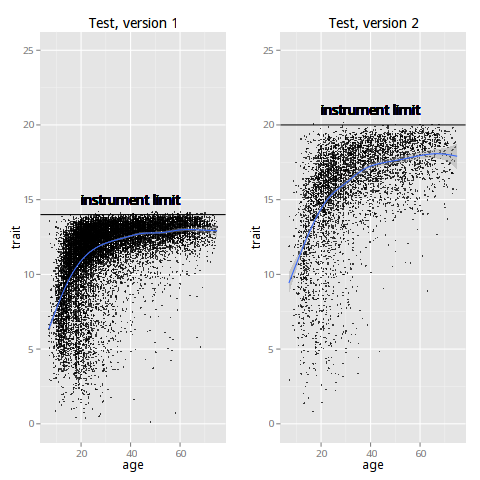 I want to know how I can detect this ceiling effect in in the data rather than just looking at it. The graphs represent actual data, not theoretical. Expanding the range of the instrument created a better data spread, but is it enough? How can I test that?

First off, I would like to say that both graphs provide clear evidence to me that there is a ceiling effect present. How I would attempt to measure that effect rather than just visually would be to observe that so long as a non-trivial portion of the observations lie near the upper limit of the instrument's range. Typically speaking a ceiling effect will always exist so long as there are a non-trivial portion of test takers who achieve the maximum score on the test.

However, that said, the technology of test analysis has progressed a long way since we needed to directly interpret the scores on a instrument based on the score correct. We can now use Item Response Theory to estimate the item parameters of individual items and use those items to identify subject ability. There of course can be still ceiling effects on a test if we make the test too easy. However, due to the powers of item response theory we should be able to put at least a few items of high enough difficulty in the instrument so as to prevent only but a trivial portion of the population hitting the ceiling.

Thanks for the question. It is very interesting!

I guess a rough and ready way would just be to measure the variance as the scale increases. If this shows a reduction then this is evidence for a ceiling effect and if not there is no ceiling effect. You could make a homogeneity of variance plot. Levene's test could be useful to determine whether variance is sig different at different points on the scale.

The critical problem in deciding whether a clustering around the highest or lowest point is due to a ceiling/floor effect is whether the values of the cases actually "represent" the value. When ceiling/floor effects do occur, some of the cases, despite assuming the maximum or minimum value, are actually higher/lower than the maximum or minimum value (imagine an adult and a child both finish an extremely simple math test that purported to measure one's math capability, and both scored 100%). Here, the data is censored.

Another scenario is also possible when we use bounded scales such as a Likert-like scale which has inherent upper and lower limits. It is entirely possible that those who scored the highest are indeed worth that score and no differences (such as the math example above) exist among all who scored the highest. In such a case, the data is truncated at the limits, not censored.

Based on the above reasoning, I reckon one should devise a procedure to fit any given dataset with data truncation and data censoring. If the censoring model best fitted the data, I think one may then conclude that a ceiling/floor effect is present.

Not the answer you're looking for? Browse other questions tagged distributions variance scales psychometrics measurement or ask your own question.

53
Under what conditions should Likert scales be used as ordinal or interval data?
13
Tobit model explanation
12
How to deal with ceiling effect due to measurement tool?

6
Sampling considerations in psychometric applications of item response theory
8
Validation of a questionnaire in a new population
3
Are significance tests only about sampling error or other forms of variation also?
2
Assessing distribution of a Likert scales