Confused about sensitivity, specificity and area under ROC curve (AUC)

Just read a unpublished paper for review purpose. The reported results like

If AUC is 1, does that mean both sensitivity and specificity should be 100%? Just can't get my head around how they got this kind of results.

If it is possible then how to interpret the results?

This is illustrated in the following figure. The possible (Sensitivity, $1-$ Specificity) combinations are drawn as red circles and the (interpolated) ROC curve as green line. The entire unit square is under the curve, and thus the area under the curve is 1. 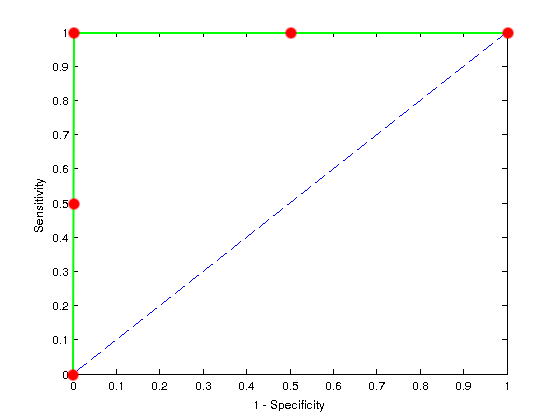 AUC=1 means for all specificities in [0,1] the sensitivity is 1. It is IMPOSSIBLE to get a sensitivity of 95%. So that paper is reporting a fundamental error. Hope this helps.

Not the answer you're looking for? Browse other questions tagged cross-validation roc pattern-recognition or ask your own question.

20
Why AUC =1 even classifier has misclassified half of the samples?
0
Problem with ROC curve in R

3
Computing by hand the optimal threshold value for a biomarker using the Youden Index
9
Classifier performance measure that combines sensitivity and specificity?
2
Accuracy and area under ROC curve (AUC)
17
Reporting variance of the repeated k-fold cross-validation
1
Leave-one-out cross validation output interpretation and ROC curve
1
How to report the results of a cross-validation to a paper: Can I manually select the best results?
2
Leave one out cross validation with classification - is that possible?
0
How to compute confidence interval for leave-one-out cross-validated AUC that is also repeated many times?