What test should I perform on a structural equation model? 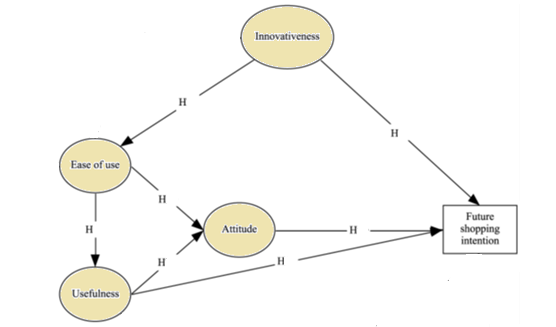 This model is a replication of an earlier study. After factor analysis in SPSS, I need to test my hypothesis (as you can see there are 7) all should give significant positive relation with each other. For example, Innovativeness has a significant positive effect on Ease of use etc.

My supervisor insists that this is mediation analysis and you have to see whether it's partial or full or indirect by AMOS but the research paper from which I've taken it did not mention any of those things. They just used structural equation modeling and mentioned each variable's effect on another one by one. I want to know what test I should perform? is it really mediation or just SEM? Should I use SPSS or AMOS?

I do not have much time left for my thesis and I have already mentioned couple of times that I am quite poor in SPSS and even worst in AMOS. Suggest and help me out with the right test. I need step by step guide.

spss sem mediation amos
share|cite|improve this question
edited May 17 '14 at 7:03

I guess your supervisor is correct and the model is implying mediations. In general, most of SEM and Path analysis involve some mediation or indirect effects. The whole point, of these models is to say, instead of everything being related to everything, i.e. like in a correlation matrix, is to say that some relations are good enough to explain the whole variation of the variables. The whole point is to use lesser links between variables from a correlation matrix, to a fewer set of relations (best case scenario) derive from a theoretical model.

So, if you want to test that same model, you would need to specify it in AMOS; or other alternative software such as: R (package lavaan), MPLUS, Lisrel, EQS, SAS, and I've heard STATA can deal with path analysis in the current version.

If you would stick with AMOS, a good guide book is:

First, once you have your data, you could fit that model onto your observations. For this case, your first 'test' would consist to asses the degree of fit of the overall model. For this, researchers tend to use a family of Fit statistic: Chi Square, CFI, TFI, RMSEA, SRS.

For common guidelines on what different fit indices mean you can consult:

(..etc there are more indirect effects from innovativeness to future intention of shopping, which i'm not mentioning).

Mediational analysis then follow additional rules. The most common is the use of the delta method, to estimate the indirect effect between X (independent) to Y (dependent) via M (mediator). Commonly, is the multiplication of the beta weight from x to m, and from m to y. However, how to estimate the standard errors of this estimate is another story. There Bootstrapping methods for example, and different methods for the case of binary variables as an outcome. Currently, there might be new methods. Mediation analysis is quite a hot topic given its within the whole problem of "how to make causal claims", and probably every year there is new upgrades for common practice.

As an example, you can check this, for a bootstrapped method:

And this for a more current discussion on mediation analysis:

Finally, you may start with a more simple example to grasp how mediation works, you can check this example: http://www.ats.ucla.edu/stat/mplus/seminars/introMplus_part2/path.htm

And, specifically for an walk through example on AMOS, you could check this youtube video: http://www.youtube.com/watch?v=9mf7nIAlH5c

You have two mediation paths in your model:

An effect is said to be fully mediated by the indirect paths if the direct coefficient is zero provided all other relevant paths are in the model. AMOS should produce a z-statistic for this test in the standard output. If the effect is not fully mediated, i.e., if the direct link is still significant, you can ask the next question of how much of the total effect (= direct + indirect effect; the coefficient in a model that will only involve Innovativeness and the Outcome) is due to the direct vs. mediated effect. It is at this point when you'd have to start figuring out the products of coefficients along the indirect arrows, and agonize over better standard errors for this complicated statistic, some pointers to which are given in dacarass' answer.

Not the answer you're looking for? Browse other questions tagged spss sem mediation amos or ask your own question.