Where does p-value come from in McNemar's Test?

I was using this online calculator to work out McNemar's Test on this data set:

I get the results:

Now I understand how to calculate the Chi squared but I have no idea where this P value comes from.

Also how does the P value relate to whether there is a significant difference between classifiers?

If someone could explain this like a program in JavaScript or something it would be so much clearer. Every explanation I see throws jargon all over the place.

but perhaps this is all the jargon and what not that you were saying you were confused about. What the statement above is saying is that the $p$ value is a probability calcuated under the chi-squared $(\chi^2_1)$ distribution. You can think of a probability as being an area under a particular curve (think back to integrals in calculus).

The curve in question here is the chi-squared density 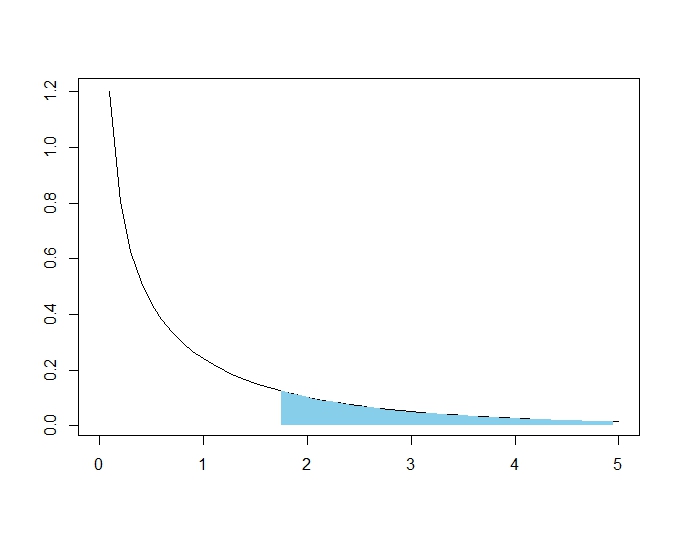 The $p$ value is the blue shaded area under the curve I have plotted.

Now sure you can try to calculate this by hand to get p-value but most programming languages have built in functions to calculate are under density curves. In R you can do this:

Not the answer you're looking for? Browse other questions tagged classification p-value mcnemar-test or ask your own question.

264
What is the meaning of p values and t values in statistical tests?
30
What is the difference between McNemar's test and the chi-squared test, and how do you know when to use each?

23
Stouffer's Z-score method: what if we sum $z^2$ instead of $z$?
1
Trying to determine the similarity of the distributions of labels
3
P-value of F-test to compare two variances (var.test in R)
4
What is this equation (pictured) called?
2
McNemar's test p-value NA
2
Comparing two decision models using McNemar's test
0
Mcnemar's test p-value output in R confusion matrix
2
How was p-value calculated in this Wikipedia example of a Binomial test
3
Is McNemar's Test Appropriate Here?