How to discriminate between non-nested models? 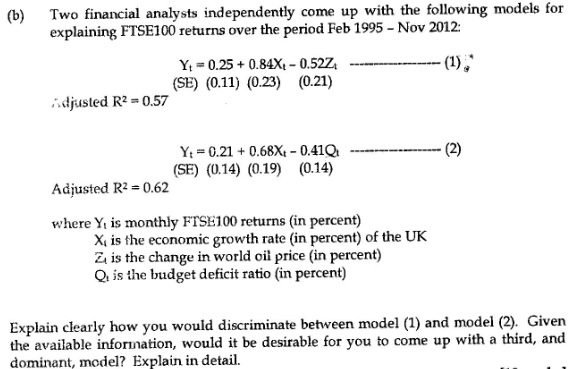 So first this question asks "how I would discriminate between model(1) and model(2)".

It appears that both models are non-nested so I would come up with a hybrid model consisting of Xt,Zt and Qt regressors. I know I need to test for Zt=0 and Qt=0 but I'm not sure if I need to test for Xt=0. My logic tells me no as the point is to compare model(1) and model(2), since they both contain Xt as regressor this won't tell me if model(1) is better than model(2) and vice-versa. But someone please correct me if I'm wrong.

For the second part where: Given the available information, would it be desirable for you to come up with a third and dominant model?

First a third model would be desirable only if model(1) and model(2) are not "good" or we would want a better model. But from the way the question is formulated it cannot be the second one, so I believe I should test each individual models to see if they are "good".

Apart from these two tests there aren't really any other information that can be used to tests the models.

So if model(1) and model(2) fail any of these tests then a third and dominant model would be desirable. Is my understanding correct?

I would look also at the efficiency of the estimators, i.e. at their variance-covariance matrix. Efficiency is important since it measures the uncertainty characterizing the point estimates.

The two models self-select with respect to a single regressor. So it is a duel between the two regressors. Put them in the arena together, and see who remains alive. That's the "hybrid" model you mention - used here as a "testing device" rather than as a nesting model. If one of the two regressors becomes statistically insignificant in the presence of the other, I would go with the model that contains the second -it is more strongly engaged with the dependent variable.

Since this enhanced model nests the initial two, if you are prepared to make some distributional assumption on the error terms, you can conduct straightforward Likelihood Ratio Tests, pairwise.

Also, there are formal procedures to compare "overlapping" models like yours (strictly speaking, they are midway between "nested" and "non-nested" models, since they have an explanatory variable in common), but require distributional assumptions for the distribution of the error terms in the two models (conditional on the regressors). You can consult Vuong 1989. Also, this paper by Lewis et al (2011) seems to be more focused on practical implementation of Vuong's tests.

Model selection is an open-ended task - I would not be surprised if some other answer proposes a completely different approach.

Not the answer you're looking for? Browse other questions tagged regression self-study model-selection econometrics or ask your own question.