I understand the difference between LDA and QDA (linear and quadratic discriminant analysis), being that with LDA assume that your features have the same covariance matrix in each class.

I wonder why I have not seen an example yet where they actually calculate the variance covariance matrices in each class and compare them with each other?

Or maybe you can use the pairs plot for this (ref below)? Then how do I read it?

Or should't I care too much, and just choose the model based on the prediction error? 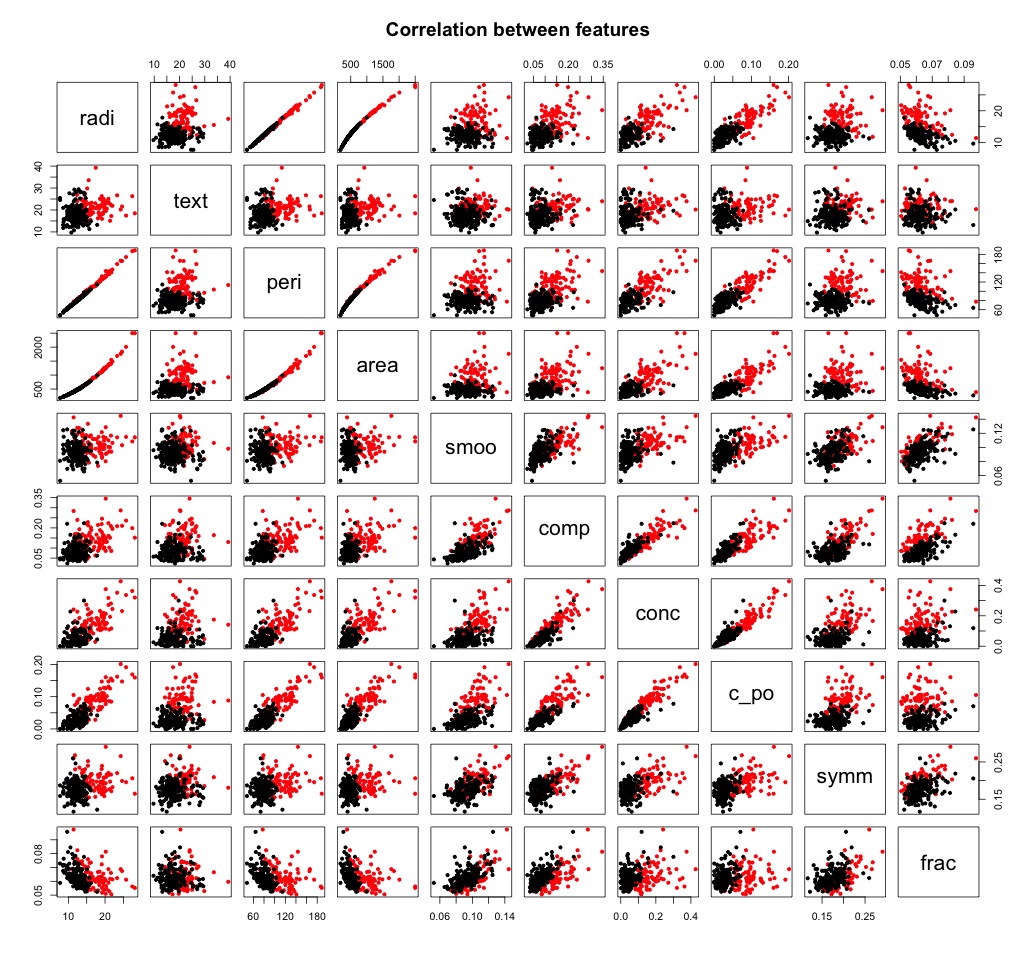 data-mining discriminant-analysis
Share
Improve this question
asked May 18 '14 at 15:30

The question is quite old. I'm surprised that there's no attempt to answer. So, I will try)

I wonder why I have not seen an example yet where they actually calculate the variance covariance matrices in each class and compare them with each other?

Well, theoretically you are completely right. But in practice, there are few thoughts why you see it very rarely:

Box’s M Test is extremely sensitive to departures from normality; the fundamental test assumption is that your data is multivariate normally distributed. Therefore, if your samples don’t meet the assumption of normality, you shouldn’t use this test.

So, how to know? Well, my personal recommendation: think about the physical meaning of your data. What are the groups you are investigating? Is there a high possibility (or some reason) of a significant difference in groups' covariance?

The null hypothesis of covariance equality is rejected. I.e. the assumption is violated. 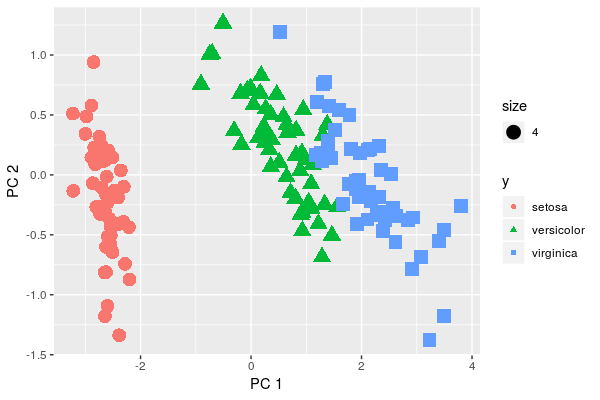 We visually see that variations are not the same in the three groups. But do they differ significantly? Doesn't seem such. Moreover, let's think about what is the data we are analyzing, i.e. petals of close species of flowers. So, it's quite natural to assume that covariance in groups is some-what the same.

As one can see, the separation quality is almost the same for LDA and QDA. But the QDA model seems overfitted because of unnecessary complex borders.

Example 2 Let's simulate more significant violation of the covariance assumption. Multiplying values of one group by 2 will increase the variance by 4 times. 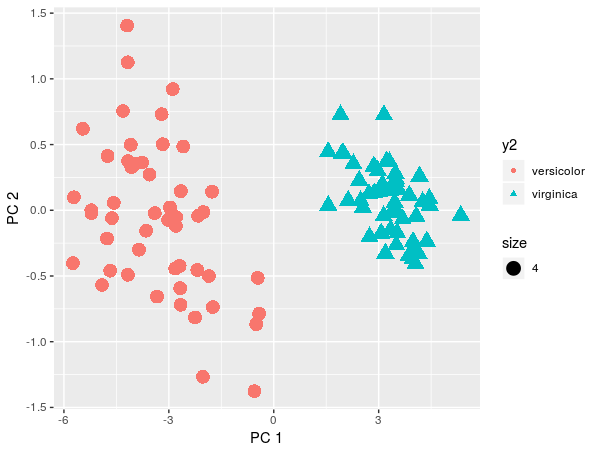 Theoretically, we would reject LDA and use QDA. But by projection on PCA we see that the two classes can be separated linearly. 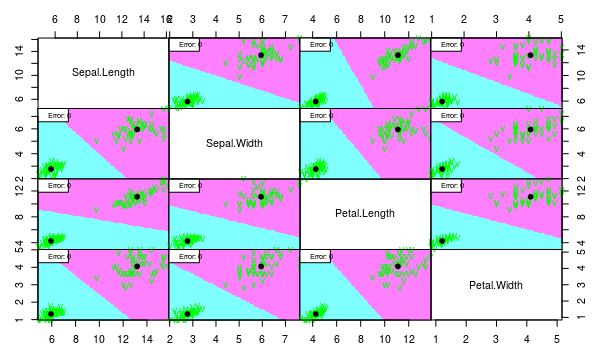 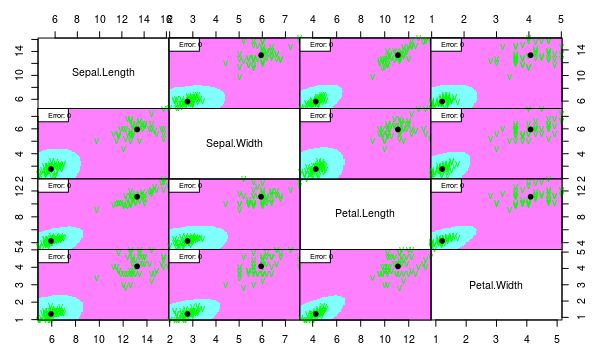 We see that both models work well despite the assumption violation. But we would choose linear model since it is more interpretable and less probably overfitted.

Example 3 Now suppose we want to discriminate only Versicolor, i.e. our target now is consists of two classes: Versicolor and not Versicolor. Now it's reasonable to assume that covariances are different because covariance of not Versicolor group contains between group variance as well. Normality assumption is violated significantly too. 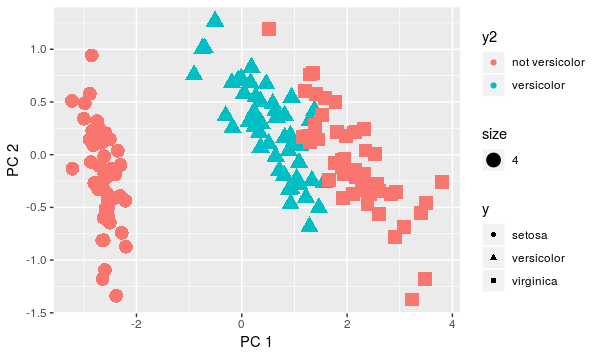 Compare the variance on red points and blue points. The difference is quite significant now, right?. Theoretically, we would refuse both QDA and LDA since there is no normality and equal covariance as well. But let's see how methods would work: 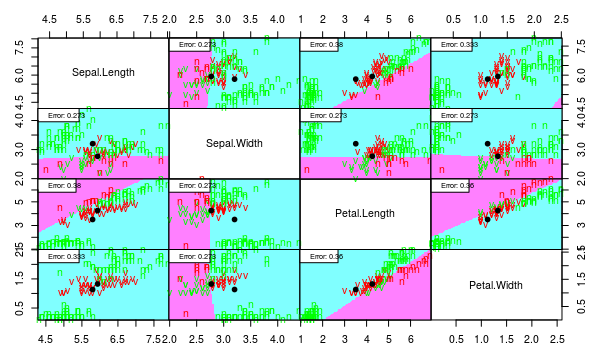 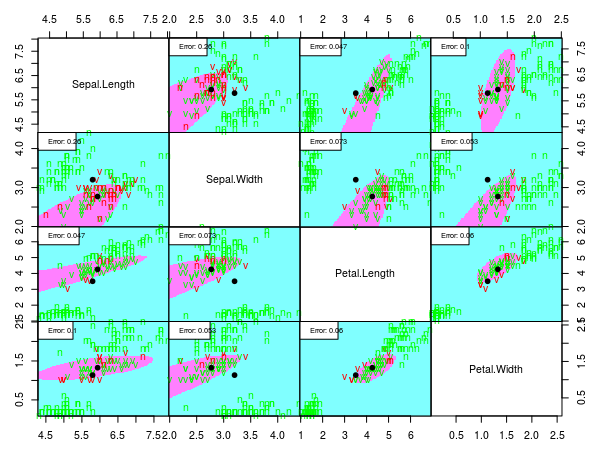 Well, LDA indeed is not suitable. However, QDA model is not that bad.

So in general, I would recommend:

Or maybe you can use the pairs plot for this (ref below)? Then how do I read it?

Not the answer you're looking for? Browse other questions tagged data-mining discriminant-analysis or ask your own question.

1
Under which circumstances does LDA achieve a higher classification accuracy than QDA?

10
Linear Discriminant Analysis and non-normally distributed data
8
What is the correct formula for between-class scatter matrix in LDA?
3
What is the correct formula for covariance matrix in quadratic discriminant analysis (QDA)?
4
Plotting QDA projections in R
10
Difference between GMM classification and QDA
2
QDA vs EM with Gaussian likelihoods