Why did removing the between-subjects factor from a two-way mixed ANOVA change the SSwithin?

I have been playing with this SPSS data file, which is a class example from a university I am not enrolled in.

Then I deleted two women from the sample and undertook the same analyses again. Now the SS for looks in is no longer the same in the two analyses. Why does this happen?

anova mixed-model
share|cite|improve this question
asked May 19 '14 at 2:58

Your design was initially balanced: 10 subjects per each cell of the 2 genders X 9 looks frequency design table. Under such condition, the main effects and the interaction effect are all orthogonal (independent): they do not intersect by their SS.

When you removed 2 women you got an unbalanced design. In all the female cells there are 8 subjects. Nevertheless, the chi-square statistic of this table remained 0. An unbalaned design with zero chi-square is called unbalanced proportional design. In such design, main effects are still orthogonal but their interaction effect is not orthogonal to them: it intersects with them by SS accounted. This is your case. Factor looks accounts for some SS; when you add factor gender the interaction of the factors accounts for some portion of those SS and takes it away from looks. 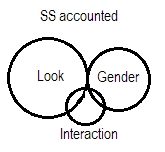 If to disbalance your design in a more sophisticated way (that would be possible if both of your factors were between-subject) chi-square of the design frequency table will cease to be zero. That would be unbalanced disproportional design. In such design, neither main effects nor their interactions are independent: they all share some portions of SS. 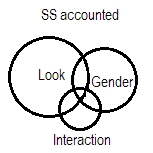 It is all those cases of unbalanced designs which raise the issue of type of SS calculation. In SPSS and many other packages, the default is Type III SS. But you may choose Type I or other types. When the design is unbalanced the result (the SSs) depend on the type of SS reckoning.

Not the answer you're looking for? Browse other questions tagged anova mixed-model or ask your own question.

1
Anova of metric items: SPSS and R display different square-sums and F-values. Which is the better philosophy?
2
What is current consensus on analysing unbalanced datasets - type I/II/or III SS
1
Dropping some levels of dummy-coded categorical variable in a linear regression due to too few observations