Estimating the error in the average of correlated values

tl;dr I can only generate samples of a random variable $X$ using MCMC. How can I find the error in the estimate of the expected value of $X$ based on this MCMC data?

I have a "black box" which gives me a sequence of "random" numbers (MCMC sampler). I have recorded $n$ numbers from this black box, which is all the data I can work with (I can't sample additional points). Now I need to estimate the average of the black box based on this data, and get some idea about how precise the estimate is.

The difficulty: Consecutive numbers coming form the black box are strongly correlated, however the $i^\text{th}$ and $(i+k)^\text{th}$ numbers are effectively uncorrelated if $k$ is large.

Are there any methods to deal with this type of situation, and find the error in the estimate? Let's assume that $n$ is large enough that I have some uncorreltaed data points.

In the following I'll describe what I am doing right now and why I am not satisfied with this method. This method works but it is not ideal. 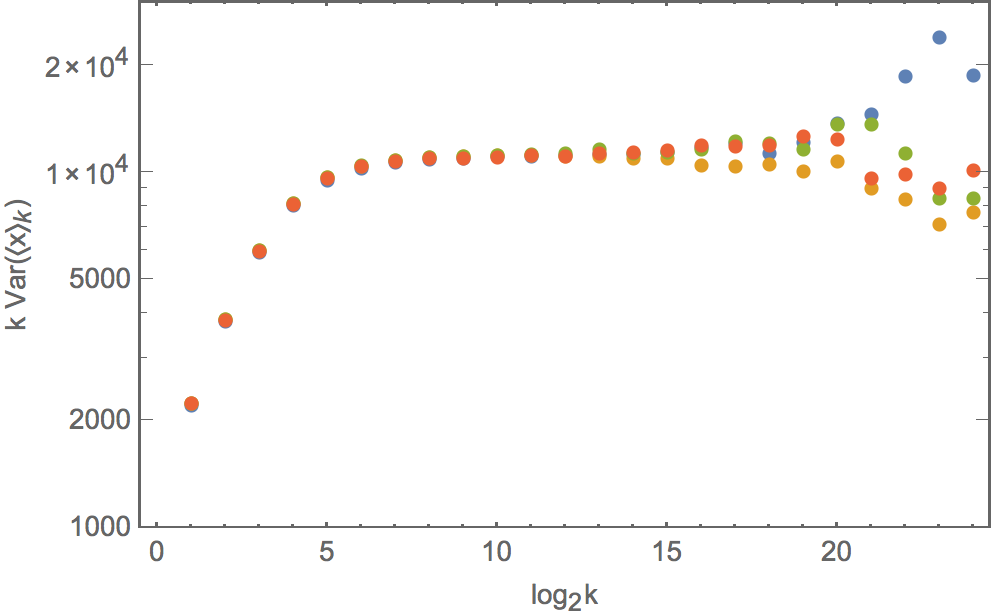 You can see that as $k$ becomes large enough, the product $k \operatorname{Var}(\langle x \rangle_k)$ settles on a constant. But as $k$ becomes too large, I can only parition my length-$n$ dataset into a few parts of length $k$, so the estimate of the variance becomes inaccurate. Hence the noise on the right of the curve.

So I need to find the flat part of the curve and discard the noisy part, then estimate the variance of the average of the full dataset ($\langle x \rangle_n$) based on it.

Why my method isn't ideal

The method I describe above is complicated and involves several steps, and several choices in each step. For how many (and what magnitude of) $k$ values should I compute the variances? How do I determine where is the flat part of the curve? How do I decide which part is too noisy to keep? All of these are separate problems on their own with many valid heuristic solutions, which will all influence the result.

I am hoping for a simpler and cleaner robust method where the details won't have such a large effect on the end result.

This is an active area of research. This first question is whether a central limit theorem (CLT) even exists which depends on the mixing properties of your MCMC, e.g. geometric convergence. Typically, this is a nontrivial question.

Provided a CLT exists, the second question is how to obtain a consistent estimator of the variance in the CLT. Partitioning the chain as you have done is called batching and is the approach used in the R package mcmcse. I'd suggest you take a look at that package and the references therein. As an example of using the package you can do

This package allows the user to specify the batch size, but defaults to the square root of the total number of samples. Perhaps the references in the package will give an indication of why this is the default or what other batch sizes will work.

Not the answer you're looking for? Browse other questions tagged estimation variance mcmc expected-value error or ask your own question.

4
Why is the variance of the error term (a.k.a., the “irreducible error”) always 1 in examples of the bias-variance tradeoff?
0
How far is my average from the series values?
12
MCMC; Can we be sure that we have a ''pure'' and ''large enough'' sample from the posterior? How can it work if we are not?
2
Estimating the average error of a random distribution
1
Assign an error to the parameters of MAP estimate