I was reading online, and I found that

Can someone explain the intuition behind these two statements.

I am generally confused about the impact of variance of X or the residuals on the explanatory power of the regression.

It's best to think in terms of ratios, how much error is explained by $x$, how much is residual.

If we think of a super-simple regression with one independent variable and slope = 1, just $y = x + \epsilon$, then $\mathrm{Var}(Y) =\mathrm{Var}(X) + \mathrm{Var}(\epsilon)$. (Of course, using the assumption that the residual error $\epsilon$ is uncorrelated with $X$.) From that, it's straightforward that as the variance of $X$ increases, so does the variance of $Y$--if you observe a wider range of $X$ values, you'll also observe a wider range of $Y$ values.

However, we assume that the residual error is fixed, it doesn't change with $X$. And we know that R^2 is defined as the ratio of "explained variance" to "total variance". So

This extends easily if the slope isn't equal to 1--the important assumption is that $\mathrm{Var}(X)$ and $\mathrm{Var}(\epsilon)$ are uncorrelated.

I find simulation a nice way to understand things too, you can see the effect with the following R code which simulates data for various values of $\mathrm{Var}(X)$ and $\mathrm{Var}(\epsilon)$, fits models, extracts the R squared values, and plots the results in a heatmap. 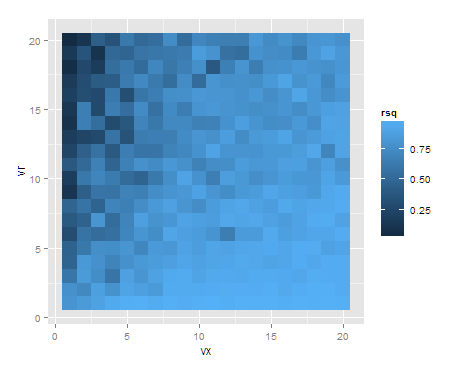 Not the answer you're looking for? Browse other questions tagged variance residuals r-squared intuition or ask your own question.

8
Calculating R-squared (coefficient of determination) with centered vs. un-centered sums of squares
4
Plots of residuals in linear regression
2
Distinguishing between what makes up R-squared
2
variance decreases when x gets farther from the average x?
1
R squared formula for Generalized Linear Models with GAMMA distribution
0
If adjusted R-squared is zero, can individual coefficients have meaningful interpretation in multiple regression?