It is often stated that the square of the sample correlation $r^2$ is equivalent to the $R^2$ coefficient of determination for simple linear regression. I have been unable to demonstrate this myself and would appreciate a full proof of this fact.

There seems to be some variation in notation: in a simple linear regression, I've usually seen the phrase "sample correlation coefficient" with symbol $r$ as a reference to the correlation between observed $x$ and $y$ values. This is the notation I have adopted for this answer. I have also seen the same phrase and symbol used to refer to the correlation between observed $y$ and fitted $\hat y$; in my answer I have referred to this as the "multiple correlation coefficient" and used the symbol $R$. This answer addresses why the coefficient of determination is both the square of $r$ and also the square of $R$, so it shouldn't matter which usage was intended.

The $r^2$ result follows in one line of algebra once some straightforward facts about correlation and the meaning of $R$ are established, so you may prefer to skip down to the boxed equation. I assume we don't have to prove basic properties of covariance and variance, in particular:

Note that the latter can be derived from the former, once we know that covariance is symmetric and that $\text{Var}(X)= \text{Cov}(X,X)$. From here we derive another basic fact, about correlation. For $a \neq 0$, and so long as $X$ and $Y$ have non-zero variances,

We won't need this more general formula to answer the current question, but I include it to emphasise the geometry of the situation: it simply states that correlation is unchanged when either variable is scaled or translated, but reverses in sign when a variable is reflected.

We need one more fact: for a linear model including a constant term, the coefficient of determination $R^2$ is the square of the multiple correlation coefficient $R$, which is the correlation between the observed responses $Y$ and the model's fitted values $\hat Y$. This applies for both multiple and simple regressions, but let us restrict our attention to the simple linear model $\hat Y = \hat \beta_0 + \hat \beta_1 X$. The result follows from the observation that $\hat Y$ is a scaled, possibly reflected, and translated version of $X$:

The preceding argument was made simpler by not having to consider sums of squares. To achieve this, I skipped over the details of the relationship between $R^2$, which we normally think of in terms of sums of squares, and $R$, for which we think about correlations of fitted and observed responses. The symbols make the relationship $R^2 = (R)^2$ seem tautological but this is not the case, and the relationship breaks down if there is no intercept term in the model! I'll give a brief sketch of a geometric argument about the relationship between $R$ and $R^2$ taken from a different question: the diagram is drawn in $n$-dimensional subject space, so each axis (not shown) represents a single unit of observation, and variables are shown as vectors. The columns of the design matrix $\mathbf{X}$ are the vector $\mathbf{1_n}$ (for the constant term) and the vector of observations of the explanatory variable, so the column space is a two-dimensional flat. 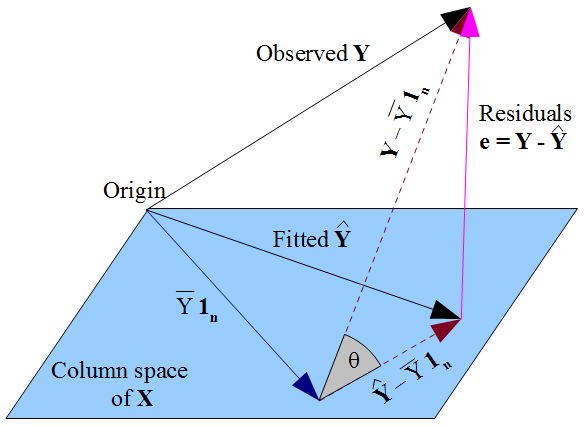 The triangle these vectors form with the vector of residuals is right-angled since $\mathbf{\hat{Y}} - \bar{Y}\mathbf{1_n}$ lies in the flat but $\mathbf{e}$ is orthogonal to it. Applying Pythagoras: