How to show that there is no relationship

I have some data which I am using to show that there is no relationship between two variables. (Or only a weak one.) In a previous writeup, I included the scatterplot showing no visible relationship, as well as the Pearson's and Spearman's correlation coefficients, which were both low. One of the reviewers commented that the statistics in the paper were weak and we 'only showed some correlations'. Is there any better way to show that there is little/no relationship between these variables? I have transformed the data using every reasonable transformation (log, square root, exponentiation), and even averaged the values for each datapoint, though it seems to me that that is falling prey to the ecological fallacy. Nothing. Not even a hint of a pattern anywhere.

Obviously, I can't show everything I tried. I want to show that there is no (or at least little) relationship, because common wisdom is that there should be a strong one. The fact that there is not a strong relationship is a surprising result. I know that you can't prove the null hypothesis, but I would like to show as much as possible that any other options are unlikely.

Note that both variables have heavy-tailed distributions - does that make a difference to the answer?

Below is a scatterplot of my data. 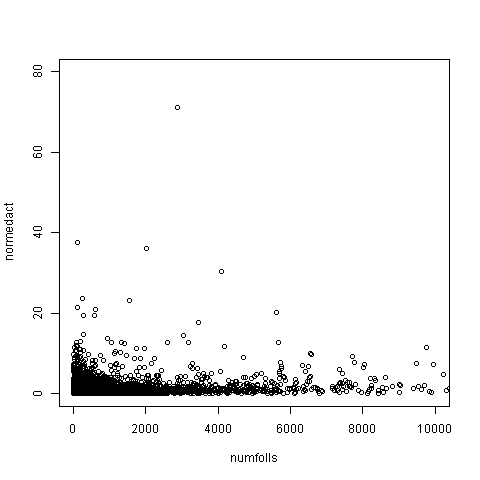 One approach is to start by determining what you consider to be little relationship (ideally this should be done before any look at the data, possibly having an expert in the field who has not seen your data or summaries help her will make this more objective). For example you might consider any correlations between -0.1 and 0.1 to be "little" or meaningless, or some other boundaries. This region is sometimes called the equivalence region. Now compute a confidence interval on your correlation, if the CI falls completely inside your equivalence or little importance region, then that is strong evidence that if there is a relationship, it is not worth getting excited about or worrying about. If part of the confidence interval extends past your bounds then that implies that there is a chance that the true relationship could be in the interesting region and you need more study/data to narrow the interval.

Additionally you may want to consider this paper:

Including some of the suggested plots where you have permuted to guarantee no real relationship as a comparison may be convincing to the reviewers/audience that your date is consistent with no (or little) relationship.

If you have enough data, an alternative way would be to estimate the empirical joint distribution, and pit it against the product of the marginal distributions. Here too the null hypothesis would be $f_{XY}(x,y) = f_X(x)f_Y(y)$ (i.e. independence), and you will try to disprove it.

This CV post How to compare joint distribution to product of marginal distributions? elaborates, and the various comments there provide also references you can look up.

Not the answer you're looking for? Browse other questions tagged correlation fitting scatterplot or ask your own question.

3
Understanding some interesting patterns in a scatterplot
5
Differences in correlation for individual and aggregated data
0
Do MCAT scores really predict med school performance?
1
Need a measurement to show relationship between a stock & its seasonal chart
1
How do you even practically use correlations for business decisions?