Variance of $K$-fold cross-validation estimates as $f(K)$: what is the role of "stability"?

TL,DR: It appears that, contrary to oft-repeated advice, leave-one-out cross validation (LOO-CV) -- that is, $K$-fold CV with $K$ (the number of folds) equal to $N$ (the number of training observations) -- yields estimates of the generalization error that are the least variable for any $K$, not the most variable, assuming a certain stability condition on either the model/algorithm, the dataset, or both (I'm not sure which is correct as I don't really understand this stability condition).

The conventional wisdom is that the choice of $K$ in $K$-fold CV follows a bias-variance tradeoff, such lower values of $K$ (approaching 2) lead to estimates of the generalization error that have more pessimistic bias, but lower variance, while higher values of $K$ (approaching $N$) lead to estimates that are less biased, but with greater variance. The conventional explanation for this phenomenon of variance increasing with $K$ is given perhaps most prominently in The Elements of Statistical Learning (Section 7.10.1):

The implication being that the $N$ validation errors are more highly correlated so that their sum is more variable. This line of reasoning has been repeated in many answers on this site (e.g., here, here, here, here, here, here, and here) as well as on various blogs and etc. But a detailed analysis is virtually never given, instead only an intuition or brief sketch of what an analysis might look like.

One can however find contradictory statements, usually citing a certain "stability" condition that I don't really understand. For example, this contradictory answer quotes a couple paragraphs from a 2015 paper which says, among other things, "For models/modeling procedures with low instability, LOO often has the smallest variability" (emphasis added). This paper (section 5.2) seems to agree that LOO represents the least variable choice of $K$ as long as the model/algorithm is "stable." Taking even another stance on the issue, there is also this paper (Corollary 2), which says "The variance of $k$ fold cross validation [...] does not depend on $k$," again citing a certain "stability" condition.

The explanation about why LOO might be the most variable $K$-fold CV is intuitive enough, but there is a counter-intuition. The final CV estimate of the mean squared error (MSE) is the mean of the MSE estimates in each fold. So as $K$ increases up to $N$, the CV estimate is the mean of an increasing number of random variables. And we know that the variance of a mean decreases with the number of variables being averaged over. So in order for LOO to be the most variable $K$-fold CV, it would have to be true that the increase in variance due to the increased correlation among the MSE estimates outweighs the decrease in variance due to the greater number of folds being averaged over. And it is not at all obvious that this is true.

Having become thoroughly confused thinking about all this, I decided to run a little simulation for the linear regression case. I simulated 10,000 datasets with $N$=50 and 3 uncorrelated predictors, each time estimating the generalization error using $K$-fold CV with $K$=2, 5, 10, or 50=$N$. The R code is here. Here are the resulting means and variances of the CV estimates across all 10,000 datasets (in MSE units):

These results show the expected pattern that higher values of $K$ lead to a less pessimistic bias, but also appear to confirm that the variance of the CV estimates is lowest, not highest, in the LOO case.

So it appears that linear regression is one of the "stable" cases mentioned in the papers above, where increasing $K$ is associated with decreasing rather than increasing variance in the CV estimates. But what I still don't understand is:

The topic of algorithmic stability is a recent one and several classic, infuential results have been proven in the past 20 years. Here are a few papers which are often cited

The best page to gain an understanding is certainly the wikipedia page which provides a excellent summary written by a presumably very knowledgeable user.

Intuitively, a stable algorithm is one for which the prediction does not change much when the training data is modified slightly.

Formally, there are half a dozen versions of stability, linked together by technical conditions and hierarchies, see this graphic from here for example: 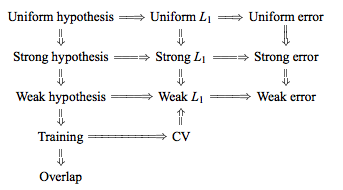 The following notation is from the wikipedia article, which itself copies the Bousquet and Elisseef paper:

Perhaps the strongest notion of stability that an interesting learning algorithm might be expected to obey is that of uniform stability:

Considered as a function of $m$, the term $\beta$ can be written as $\beta_m$. We say the algorithm is stable when $\beta_m$ decreases as $\frac{1}{m}$. A slightly weaker form of stability is:

If one point is removed, the difference in the outcome of the learning algorithm is measured by the averaged absolute difference of the losses ($L_1$ norm). Intuitively: small changes in the sample can only cause the algorithm to move to nearby hypotheses.

The advantage of these forms of stability is that they provide bounds for the bias and variance of stable algorithms. In particular, Bousquet proved these bounds for Uniform and Hypothesis stability in 2002. Since then, much work has been done to try to relax the stability conditions and generalize the bounds, for example in 2011, Kale, Kumar, Vassilvitskii argue that mean square stability provides better variance quantitative variance reduction bounds.

Some examples of stable algorithms

The following algorithms have been shown to be stable and have proven generalization bounds:

Repeating the experiment from the previous thread (see here), we now introduce a certain ratio of outliers in the data set. In particular:

As the $3$ order polynomial model is not regularized, it will be heavily influenced by the presence of a few outliers for small data sets. For larger datasets, or when there are more outliers, their effect is smaller as they tend to cancel out. See below for two models for 60 and 200 data points. 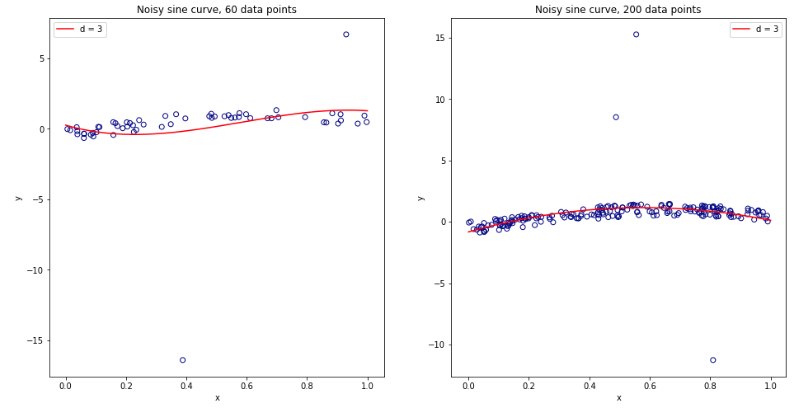 Performing the simulation as previously and plotting the resulting average MSE and variance of the MSE gives results very similar to Experiment 2 of the Bengio & Grandvalet 2004 paper.

(see the linked paper for explanation of the last figure)

Quoting Yves Grandvalet's answer on the other thread:

Intuitively, [in the situation of unstable algorithms], leave-one-out CV may be blind to instabilities that exist, but may not be triggered by changing a single point in the training data, which makes it highly variable to the realization of the training set.

In practice it is quite difficult to simulate an increase in variance due to LOOCV. It requires a particular combination of instability, some outliers but not too many, and a large number of iterations. Perhaps this is expected since linear regression has been shown to be quite stable. An interesting experiment would be to repeat this for higher dimensional data and a more unstable algorithm (e.g. decision tree)

I will give my answer in context of the paragraph you cite:

The CV estimator of the true (expected) prediction error is based on a training set example, so here, the expectation is over training set samples, when I understand that correctly.

So, what this paragraph regarding "high variance" then says is that there is a "high" difference between expected error and the error estimated by CV (which is here, the average over folds).

Or in other words, the leave-one-out CV estimator is basically almost like a holdout method were you don't rotate folds and base your error estimate on one validation set. Again, over training examples, there will be a high variance compared to estimates from k-fold, where you average over folds by already training somewhat diverse models within k-fold round (in other words, if you swap training sets, the estimates of the error via k-fold probably won't vary that much).

When I read some answers here on cross-validated and the internet in general, I think there seems some confusion to which estimator we are referring. I think some people refer to a model having high variance (with is ML talk for the loss having a dominating variance component) vs high variance of the k-fold CV estimator. And, another set of answers refer to variance as the sample variance regarding the folds when someone says "k-fold has high variance". So, I suggest to be specific, because the answers are different in either case.

We've been through this before -- you're getting too mathematical about a dead horse. See Ron Kohavi's (Stanford-Univ) classic paper on CV and the bias-variance dilemma here. When you're done reading this, you won't want to perform LOOCV, and will likely be attracted to 10-fold CV and/or bootstrap-bias CV.

You also have to think about large datasets, for which LOOCV is way too computationally expensive. At present, LOOCV is not really an option in most groups' workflows/pipelines.

What precisely is this "stability" condition? Does it apply to models/algorithms, datasets, or both to some extent?

In the universe of all cost functions and in the universe of all feature sets, I would not assume there is an overall "stability" index, because it would not be inadmissible, and would be too prone to breaking down under an infinitely large set of conditions. Fundamentally, $k=n$ is appropriate when the d.f. and/or # parameters is so large that more training data are needed. Bias will also be greater for $k=n$, since more data are used, and variance would be artificially zero, since the training datasets are too similar to one another. You would also be learning more noise in the data when $k=n$.

Is there an intuitive way to think about this stability?

Not in my view -- since there is no general rule on stability.

What are other examples of stable and unstable models/algorithms or datasets?

This is open-ended and too broad, since an infinitely large number of responses can be contrived, which would not be helpful.

Is it relatively safe to assume that most models/algorithms or datasets are "stable" and therefore that $K$ should generally be chosen as high as is computationally feasible?

No. No. Relying only on $k$ assumes that you believe the data. An example is Random Forests, for which there really is no $k$. While roughly 37% of the data will be used for testing (on average, 37% of objects are not selected when sampling with replacement), there are e.g. 5,000 different datasets (bootstraps) each of which are split into training/testing differently. Your example pulled from papers assumed that each dataset used was a true realization of the data -- which is an erroneous assumption.

Given bootstrapping, the rule of stability surrounding $k$ is admissible, since the data sample used for a straightforward CV approach involving $k$ is not a true realization of the universe of all data from which the sample was obtained.

Not the answer you're looking for? Browse other questions tagged regression machine-learning variance cross-validation predictive-models or ask your own question.