How to measure dispersion in word frequency data?

More generally, how does one measure the dispersion or "spread" in nominal data?

Is there a standard way of doing this in the text analysis community? 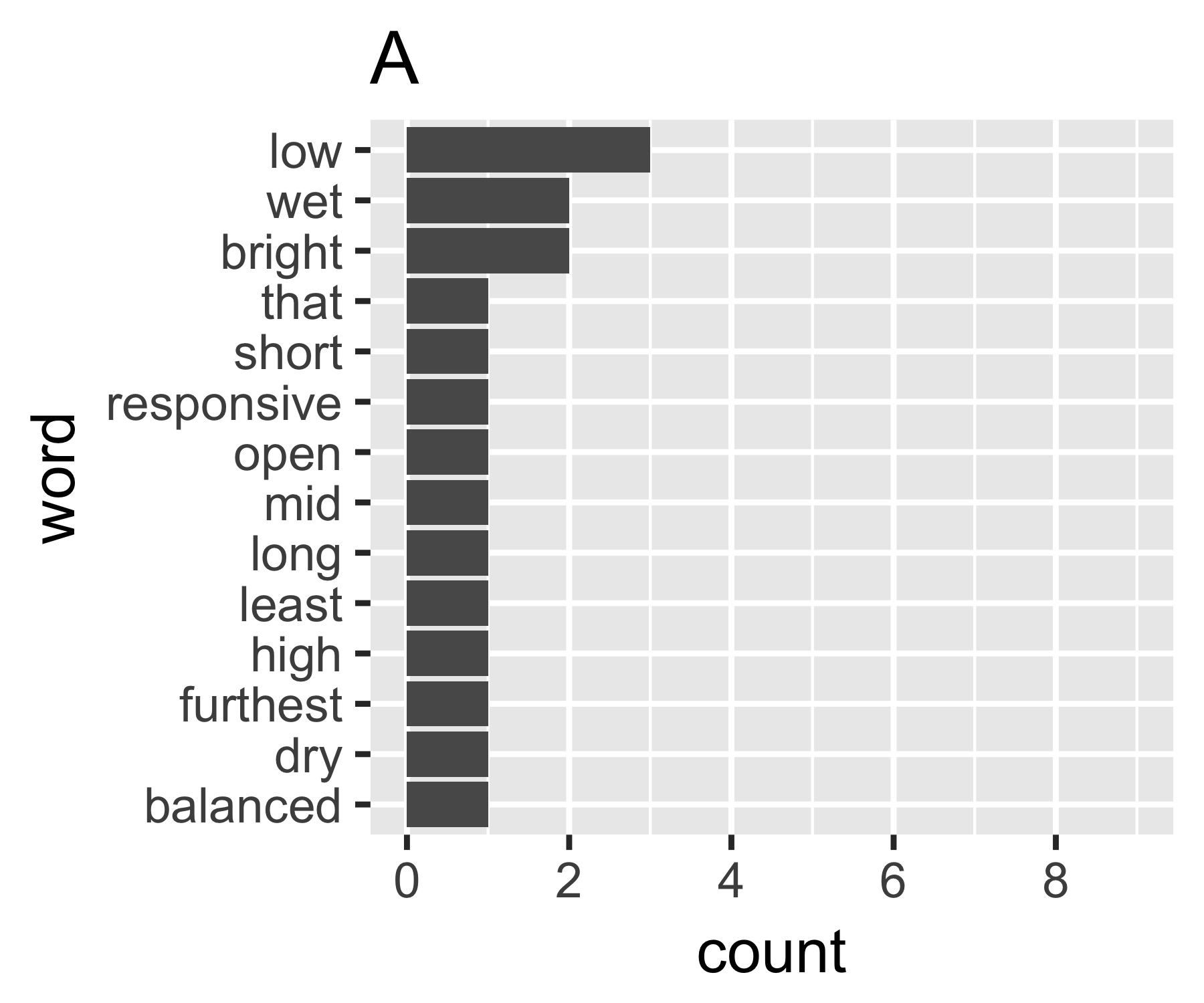 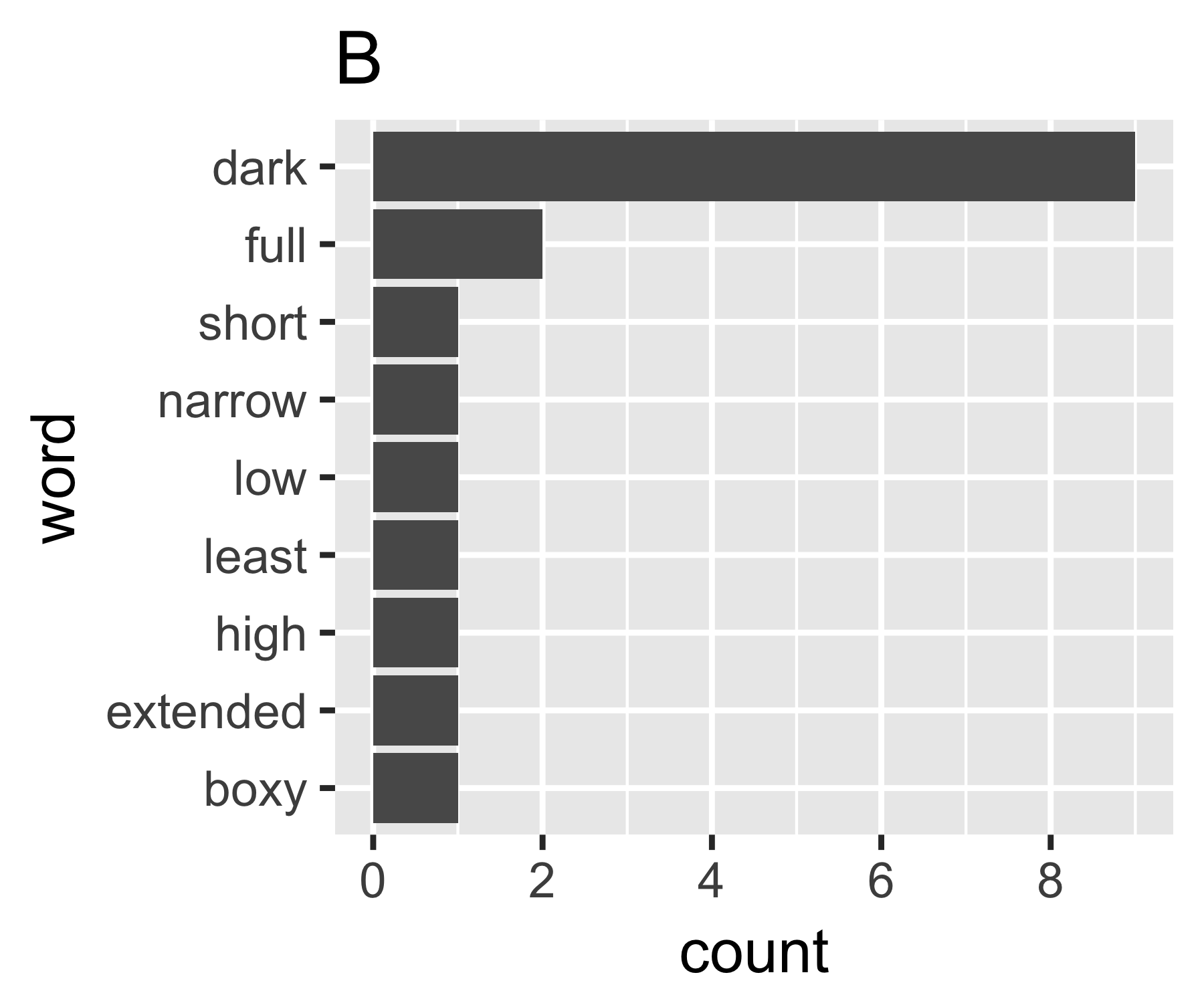 For probabilities (proportions or shares) $p_i$ summing to 1, the family $\sum p_i^a [\ln (1/p_i)]^b$ encapsulates several proposals for measures (indexes, coefficients, whatever) in this territory. Thus

The formulation is found in I.J. Good. 1953. The population frequencies of species and the estimation of population parameters. Biometrika 40: 237-264. www.jstor.org/stable/2333344.

Other bases for logarithm (e.g. 10 or 2) are equally possible according to taste or precedent or convenience, with just simple variations implied for some formulas above.

Independent rediscoveries (or reinventions) of the second measure are manifold across several disciplines and the names above are far from a complete list.

Tying together common measures in a family is not just mildly appealing mathematically. It underlines that there is a choice of measure depending on the relative weights applied to scarce and common items, and so reduces any impression of adhockery created by a small profusion of apparently arbitrary proposals. The literature in some fields is weakened by papers and even books based on tenuous claims that some measure favoured by the author(s) is the best measure that everyone should be using.

My calculations indicate that examples A and B are not so different except on the first measure:

(Some may be interested to note that the Simpson named here (Edward Hugh Simpson, 1922- ) is the same as that honoured by the name Simpson's paradox. He did excellent work, but he wasn't the first to discover either thing for which he is named, which in turn is Stigler's paradox, which in turn....)

I don't know if there's a common way of doing it, but this looks to me analogous to inequality questions in economics. If you treat each word as an individual and their count as comparable to income, you're interested in comparing where the bag of words is between the extremes of every word having the same count (complete equality), or one word having all the counts and everyone else zero. The complication being that the "zeros" don't show up, you can't have less than a count of 1 in a bag of words as usually defined ...

I'm interested in any other answers too. Obviously the old fashioned variance in counts would be a starting point too, but you'd have to scale it somehow to make it comparable for bags of different sizes and hence different mean counts per word.

The text also mentions two more measures of dispersion, but they rely on the spatial positioning of the words, so this is inapplicable to the bag of words model.

The first I would do is calculating Shannon's entropy. You can use the R package infotheo, function entropy(X, method="emp"). If you wrap natstobits(H) around it, you will get the entropy of this source in bits.

One possible measure of equality you could use is the scaled Shannon entropy. If you have a vector of proportions $\boldsymbol{p} \equiv (p_1, ... , p_n)$ then this measure is given by:

This is a scaled measure with range $0 \leqslant \bar{H}(\boldsymbol{p}) \leqslant 1$ with extreme values occurring at the extremes of equality or inequality. Shannon entropy is a measure of information, and the scaled version allows comparison between cases with different numbers of categories.

Not the answer you're looking for? Browse other questions tagged variance natural-language gini dispersion bag-of-words or ask your own question.

9
Understanding Singular Value Decomposition in the context of LSI
11
Why Are Measures of Dispersion Less Intuitive Than Centrality?
2
How does TextRank differentiate between keywords and simply frequent words, such as “is”
50
Apply word embeddings to entire document, to get a feature vector
3
Understanding the role of document size parameters in Latent Dirichlet Allocation
0
Specifying the neighborhood for Word-to-Abbreviation associations in corpus of document pairs
1
Measuring similarity between document and category
2
Balanced datasets are almost all predicted negative