Proper scoring rule when there is a decision to make (e.g. spam vs ham email)

Brier score says that the second classifier crushes the first, even though the second cannot achieve perfect accuracy.

However, if we go with the second classifier, we end up calling a "ham" email "spam" and sending it to the spam folder. Depending on the email content, that could be quite bad news. With the first classifier, if we use a threshold of $0.50$, we always classify the spam as spam and the ham as ham. The second classifier has no threshold that can give the perfect classification accuracy that would be so wonderful for email filtering.

I concede that I don't know the inner workings of a spam filter, but I suspect there's a hard decision made to send an email to the spam folder or let it through to the inbox.$^{\dagger}$ Even if this is not how the particular example of email filtering works, there are situations where decisions have to be made.

As the user of a classifier who has to make a decision, what is the benefit of using a proper scoring rule as opposed to finding the optimal threshold and then assessing the performance when we classify according to that threshold? Sure, we may value sensitivity or specificity instead of just accuracy, but we don't get any of those from a proper scoring rule. I can imagine the following conversation with a manager.

Me: "So I propose that we use the second model, because of its much lower Brier score."

Boss: "So you want to go with the model that [goofs] up more often? SECURITY!"

I can see an argument that the model with the lower Brier score (good) but lower accuracy (bad) might be expected to perform better (in terms of classification accuracy) in the long run and should not be so harshly penalized because of a fluke point that the other model gets despite its generally worse performance, but that still feels like an unsatisfying answer to give a manager if we’re doing out-of-sample testing and seeing how these models perform on data to which they were not exposed during training.

$^{\dagger}$An alternative would be some kind of dice roll based on the probability determined by the classifier. Say we get $P(spam)=0.23$. Then draw an observation $X$ from $\text{Bernoulli}(0.23)$ and send it to the spam folder iff $X=1$. At some point, however, there is a decision made about where to send the email, no "23% send it to the spam folder, 77% let it through to the inbox".

machine-learning classification model-evaluation accuracy scoring-rules
Share
Improve this question
edited May 28, 2020 at 10:52
Dave
asked May 5, 2020 at 13:30

The short version: I'm afraid your example is a bit of a straw man, and I don't think we can learn a lot from it.

In the first case, yes, you can threshold your predictions at 0.50 to get a perfect classification. True. But we also see that your model is actually rather poor. Take item #127 in the spam group, and compare it to item #484 in the ham group. They have predicted probabilities of being spam of 0.49 and 0.51. (That's because I picked the largest prediction in the spam and the smallest prediction in the ham group.)

That is, for the model they are almost indistinguishable in terms of their likelihood of being spam. But they aren't! We know that the first one is practically certain to be spam, and the second one to be ham. "Practically certain" as in "we observed 1000 instances, and the cutoff always worked". Saying that the two instances are practically equally likely to be spam is a clear indication that our model doesn't really know what it is doing.

Thus, in the present case, the conversation should not be whether we should go with model 1 or with model 2, or whether we should decide between the two models based on accuracy or on the Brier score. Rather, we should be feeding both models' predictions to any standard third model, such as a standard logistic regression. This will transform the predictions from model 1 to extremely confident predictions that are essentially 0 and 1 and thus reflect the structure in the data much better. The Brier score of this meta-model will be much lower, on the order of zero. And in the same way, the predictions from model 2 will be transformed into predictions that are almost as good, but a little worse - with a Brier score that is somewhat higher. Now, the Brier score of the two meta-models will correctly reflect that the one based on (meta-)model 1 should be preferred.

And of course, the final decision will likely need to use some kind of threshold. Depending on the costs of type I and II errors, the cost-optimal threshold might well be different from 0.5 (except, of course, in the present example). After all, as you write, it may be much more costly to misclassify ham as spam than vice versa. But as I write elsewhere, a cost optimal decision might also well include more than one threshold! Quite possibly, a very low predicted spam probability might have the mail sent to your inbox directly, while a very high predicted probability might have it filtered at the mail server without you ever seeing it - but probabilities in between might mean that a [SUSPECTED SPAM] might be inserted in the subject, and the mail would still be sent to your inbox. Accuracy as an evaluation measure fails here, unless we start looking at separate accuracy for the multiple buckets, but in the end, all the "in between" mails will be classified as one or the other, and shouldn't they have been sent to the correct bucket in the first place? Proper scoring rules, on the other hand, can help you calibrate your probabilistic predictions.

To be honest, I don't think deterministic examples like the one you give here are very useful. If we know what is happening, then we wouldn't be doing probabilistic classification/prediction in the first place, after all. So I would argue for probabilistic examples. Here is one such. I'll generate 1,000 true underlying probabilities as uniformly distributed on $[0,1]$, then generate actuals according to this probability. Now we don't have the perfect separation that I'm arguing fogs up the example above. 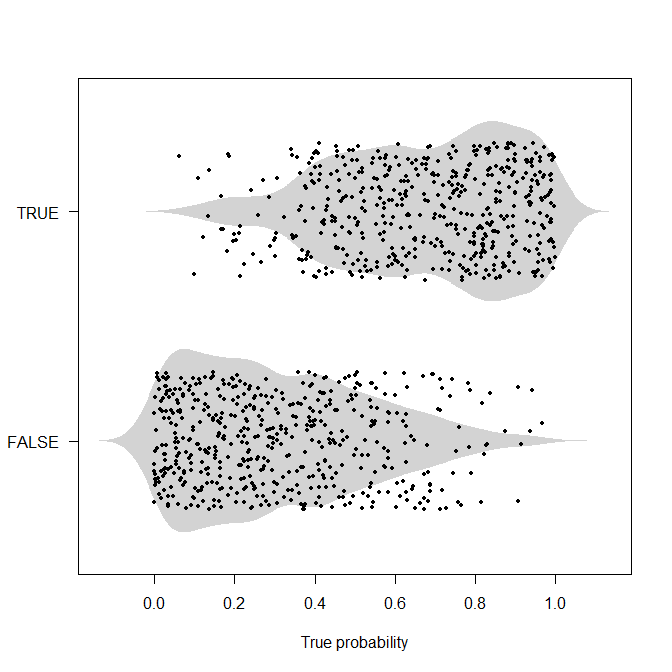 Let's look at a couple of miscalibrated predicted probabilities. Specifically, for the true probabilities $p$, we can look at power transforms $\hat{p}_x:=p^x$ for some exponent $x>0$. This is a monotone transformation, so any thresholds we would like to use based on $p$ can also be transformed for use with $\hat{p}_x$. Or, starting from $\hat{p}_x$ and not knowing $p$, we can optimize thresholds $\hat{t}_x$ to get the exact same accuracies for $(\hat{p}_x,\hat{t}_x)$ as for $(\hat{p}_y,\hat{t}_y)$, because of the monotonicity. This means that accuracy is of no use whatsoever in our search for the true probabilities, which correspond to $x=1$! However (drum roll), proper scoring rules like the Brier or the log score will indeed be optimized in expectation by the correct $x=1$. 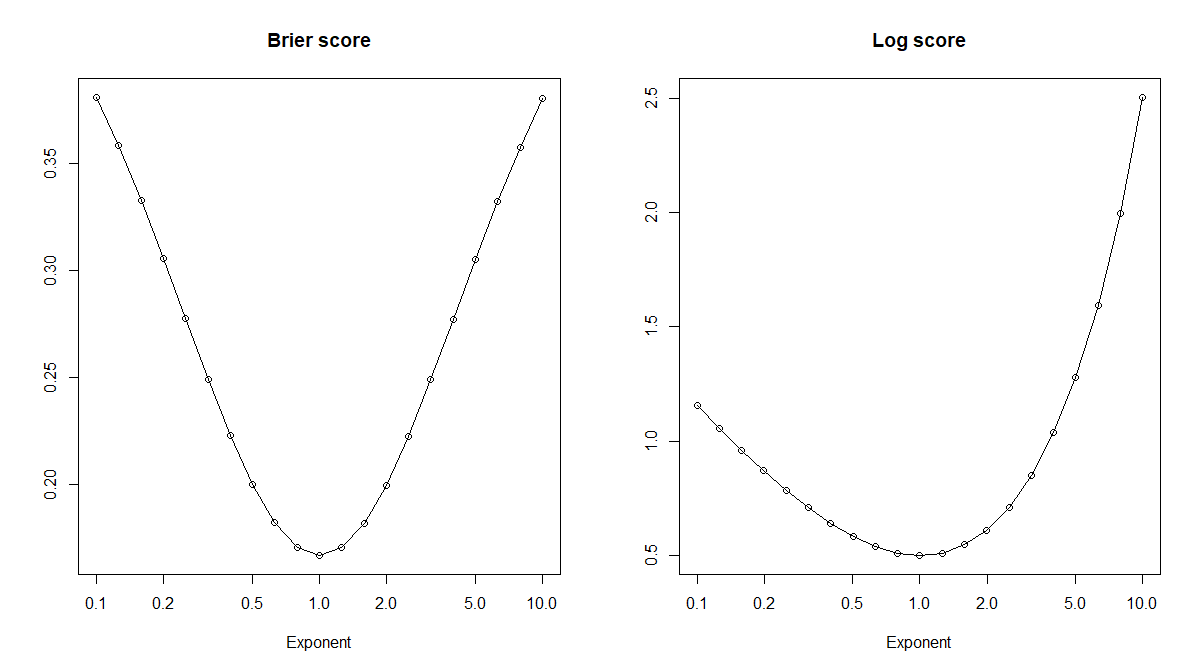 I think it is worth making the distinction between performance evaluation and model selection criteria.

In performance evaluation you want to know how well your system is likely to perform in operation, based on the data you have available now. When evaluating performance, you need to use the metric that is appropriate for your task. So if you have a classification problem (i.e. you do need to make a hard "yes"/"no" decision) and the false-positive and false-negative costs are the same, then classification accuracy is an appropriate performance evaluation criterion. Obviously you would probably want to evaluate the uncertainty of the performance estimate, perhaps using bootstrap replication.

For a model selection criterion, on the other hand, where we want to chose between competing methods, accuracy might not be a good criterion, even if it is the primary quantity of interest. The problem is that accuracy is brittle, if you ran the experiment again, but with a different sample of training data, you might get a slightly different decision boundary that gave a very different accuracy on the same test data. In this case, because the margins on the first classifier are quite small, it is more likely that the decision boundary will shift if it is trained on a different sample of data than the second one. Likewise, if the classifier is evaluated on a different set of test data, the first classifier is more likely to make mistakes than the second. As the margins are small, the new test data has to be only slightly different to the old data near the decision boundary for there to be a misclassification. Thus the Brier score is rewarding the second classifier for it's greater stability. This is important as we want a classifier that will perform well in operation, not just on this particular test set.

I learned this from taking part in a "Performance Prediction Challenge" hosted by a conference, where you had to provide not just the predictions, but also an estimate of how accurate (balanced accuracy in this case) your model would be on the test data. So this is based on experimentation and experience - challenges like these are a good place to find out what actually works and what doesn't as there are no straw men or "operator bias" issues in the evaluation. The paper is here FWIW (preprint here).

Not the answer you're looking for? Browse other questions tagged machine-learning classification model-evaluation accuracy scoring-rules or ask your own question.

201
Why is accuracy not the best measure for assessing classification models?
72
Reduce Classification Probability Threshold
24
What is the importance of probabilistic machine learning?
14
How would I bias my binary classifier to prefer false positive errors over false negatives?
17
Brier Score and extreme class imbalance
15
Why not use evaluation metrics as the loss function?
14
Why is LogLoss preferred over other proper scoring rules?
5
Interpretation of coefficients in a poorly performing GLM
13
How do you know that your classifier is suffering from class imbalance?
8
Best way to reduce false positive of binary classification to exactly 0?
See more linked questions

7
What exactly does a proper scoring rule want to do?
5
Proper Scoring Rule in Optical Character Recognition
2
Naive benchmarks for scoring rules
7
Is there something like a confusion matrix for a probabilistic score rather than categories?
1
Normalize different binary prediction probability thresholds