I have two normal distributions defined by their averages and standard deviations.

You can see how they look like in the next image: 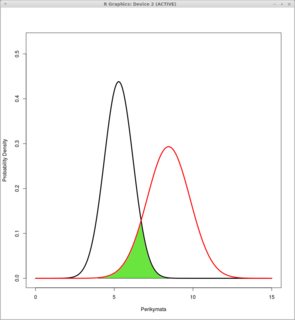 It is not quite clear what you mean by probability to obtain an individual from the overlapping area. This solves for the area of the green zone in your diagram:

Let $c$ denote the point of intersection where the pdf's meet in the green zone of your plot Then, the area of your green intersection zone is simply:

where erf(.) is the error function.

@abdelbasset, To improve @wolfies 's answer above, there are two intersection points c, let's call them c1 and c2. Here, c1=-1.2848 and c2=6.7046. @wolfies ignored c1 (it likely will be too far in the tails of the probability density functions to matter (especially if we round to just a few decimal points)).

The more correct way is to find both c1 and c2, and to find the area of overlap of both functions:

There are two scenarios when calculating the intersections of two normal distributions. It's important to acknowledge that, in most cases, there are two intersection points:

This being, of course, the midpoint between the respective means.

The intersection points of the two curves can be solved algebraically to obtain the quadratic form and the roots can then be found using the quadratic formula. It’s not as hard as it seems and does not involve using the error function. However, for time and space, I give Inman and Bradley’s version where the intersection points can be found directly.

For some intersecting normal distributions with unequal variances, the ‘second’ intersection point maybe insignificant and can, effectively, be ignored. However, for most cases – especially when $\mu_a\approx\mu_b$ – having both intersection points are critical to determine the ‘common area’ (overlap).

The common area (overlap), $\phi$, is calculated from:

Normalise the graphs to an area of 1 by dividing each by their respective standard deviation. Then use simple subtraction from a z-graph to calculate the probability of an occurrance in that overlap area. No need for erfs.