Regression Slope and a Bilateral Test

Well, I observe that the standard statistical software package tests regression coefficients if they are statiscally different from zero, that is, not specifically higher nor lower than zero -- a bilateral test in a normal distribution, for instance. But why is that? I understand that if your test rejects the null in a bilateral test, you'll rejected it even more significantly in a one-sided test. But you may risk not rejecting the null, when it should be rejected, in a bilateral test -- right? Is there any discussion on this topic on why not doing one-sided tests on the coefficients? Or not frequently, at least.

The problem with choosing which direction you want to test for after you see the data is that your claimed significance level is a lie.

The probability that you'll reject the null when it's in fact true is doubled from the claimed (nominal) level. This is a form of data-dredging. 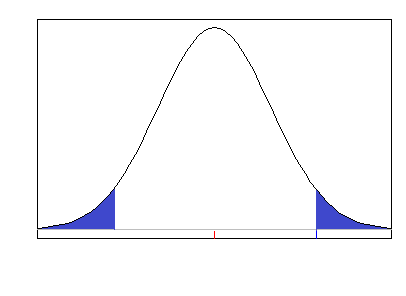 For a test at level $\alpha$, when the null is true, you have a probability of $\alpha/2$ in each tail.

If you choose which side to test on by looking at the data, it's instead like this: 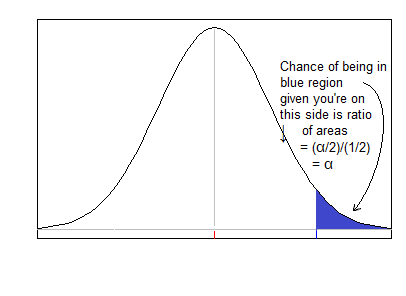 -- as I suggested, it doubles the significance level.

For a one sided test to have the claimed properties, you have to specify the event of interest before you see it.

If you want to be able to specify it after the fact, to do it with the correct significance level, you in effect end up doing a two-tailed test.

Not the answer you're looking for? Browse other questions tagged regression statistical-significance normal-distribution t-test or ask your own question.

0
One-sided ttests in regression analysis with a clear prior

37
Significance contradiction in linear regression: significant t-test for a coefficient vs non-significant overall F-statistic
7
Some questions about two-sample comparisons
6
Empirical rejection rate of a wrong null hypothesis -is it the “power of the test”?
1
Paired t-test to test trends in regression coefficients between groups
3
Regression and $R^2$
2
Logistic Regression Z-value
7
How can the F-test reject the null hypothesis while the KS test does not?
0
Compare regression coefficients within the same model