What kind of research design is this, is it even possible? If so, how to go about analyzing it?

This is for a psychology design.

I have 2 groups, all members of both groups are to be administered all tests.

I think that I want to do a 3x2 factorial ANOVA on the DIFFERENCES in the means of my control vs 'autism' groups. 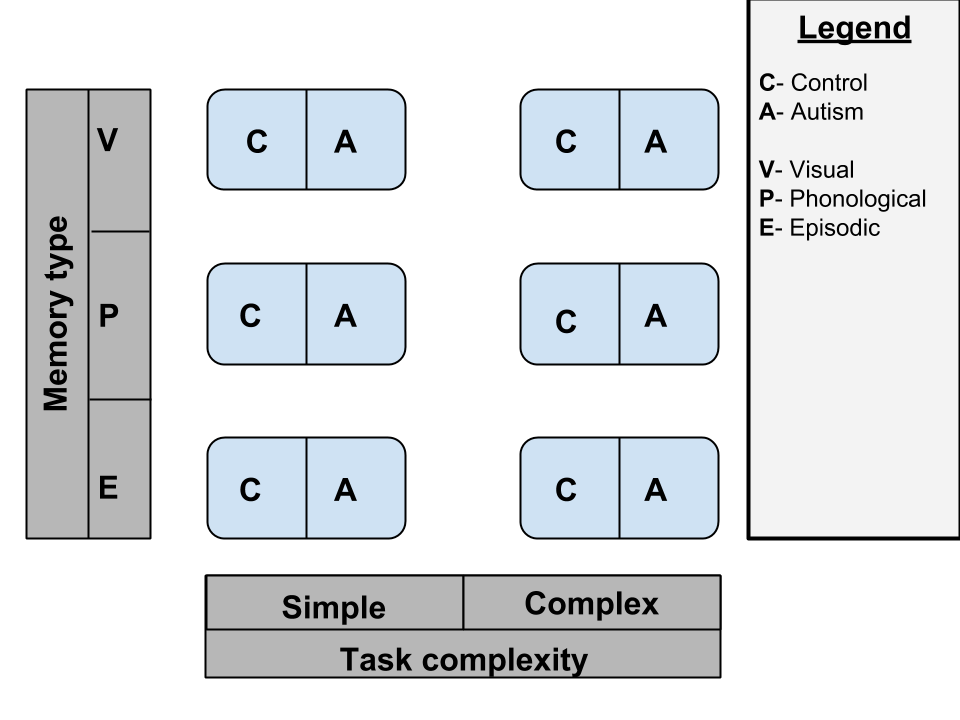 I think that I could run this without the Control group, but I also want to simultaneously determine that they perform similar to control on the simple level of complexity, that they do not vary from control depending on the type of memory assessment, and that the main difference is on the complex memory tests. (So basically, t-tests within simple, and across memory types would be non-significant, or with negligible effect sizes, but t-tests within the complex conditions would be significant.)

My questions are: - Can this be done? - Does this have a name? - What tests do I use to analyze this? (Can I just create a new 'difference scores' or 'mean difference' variable [with a pooled SD?] and use one or the other in a basic factorial ANOVA?)

From what I see, your design actually has three IVs:

Thus, I would recommend that you run a 3x2x2 mixed ANOVA, which would enable you to test your hypotheses about the main/interactive effects of Memory Type and Task Complexity, while comparing these effects between your two samples of control v. individuals with autism. Any significant interactions you could follow up by testing simple main effects.

Not the answer you're looking for? Browse other questions tagged anova experiment-design psychology or ask your own question.

1
Two-way ANOVA, what to do next?
1
Interpretation of ANOVA main effect, ignoring one row
3
What is the right way to analyze Full factorial design (by groupe/ by factor?)
2
Confused about DOE and repeatability
0
A two mixed ANOVA showed no significant interaction, but showed a statistically significant main effect of time, Do I need to run a paired T-test?
0
GLM: determine main effects — model fit vs. ANOVA-I/II/III