References: Tail of the inverse cdf

I am almost sure I have already seen the following result in statistics but I can't remember where.

This is easy to see geometrically by using the equality $\mathbb{E}(X)=\int 1-F$ and by considering a horizontal cut at $\varepsilon$ of the area under the curve of the integrand $1-F$.

Do you know a reference for this result and whether it has a name ?

To handle the "little work" suggested by Yves in the comments, geometry suggests a rigorous and fully general proof.

If you like, you may replace all references to areas by integrals and references to "arbitrary" by the usual epsilon-delta arguments. The translation is easy.

To set up the picture, let $G$ be the survival function 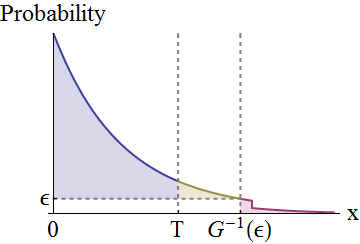 The figure plots a part of $G$. (Notice the jump in the graph: this particular distribution is not continuous.) A large threshold $T$ is shown and a tiny probability $\epsilon \le G(T)$ has been selected (so that $G^{-1}(\epsilon)\ge T$).

We're ready to go: the value we're interested in, $\epsilon F^{-1}(1-\epsilon) = \epsilon G^{-1}(\epsilon)$ (the one we want to show converges to zero), is the area of the white rectangle with height $\epsilon$ and base from $x=0$ to $x= G^{-1}(\epsilon)$. Let's relate this area to the expectation of $F$, because the only assumption available to us is that this expectation exists and is finite.

All the pieces are now in place: the graph of $G$, the threshold $T$, the small height $\epsilon$, and the right-hand endpoint $G^{-1}(\epsilon)$ suggest a dissection of $E_{+}$ into areas we can analyze:

Not the answer you're looking for? Browse other questions tagged references quantiles cdf moments or ask your own question.

17
Does a univariate random variable's mean always equal the integral of its quantile function?

7
Fast approximation to inverse Beta CDF
10
General theorems for consistency and asymptotic normality of maximum likelihood
1
Inverse CDF of normal variable
3
Asymptotic distribution of the average of $p$ sample-percentile
2
How to simplify the derivation of the inverse cdf yielded from l'Hospital rule?