What clustering algorithm should I use for clusters spaced on a grid?

I have some data sets of clusters of points arranged more or less on a regular grid. The data sets have these properties:

Here's an example of one two-dimensional "slice" of one of these data sets (5x4), where clusters in the bottom row have less covariance than the others: 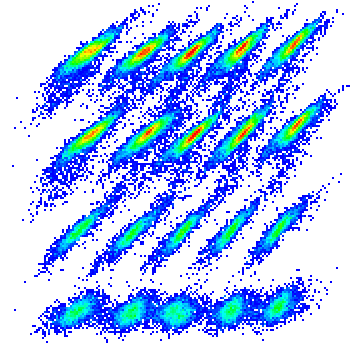 An overall goal is probably to classify at least 90% of data points correctly, and it would be much better to classify a point as an outlier than as belonging to the wrong cluster. Speed is a slight factor, I might need to process a group of 500 data sets each with 100 clusters of 500-1000 points and the grids might differ slightly between sets. Preferably that wouldn't take all day.

My idea at this point is to treat the data as a gaussian mixture model and use expectation maximization. I could either use the standard model and use what I know about the structure of the data to generate a good initial guess, which will hopefully converge reliably, or I could impose some sort of prior on the cluster means and variances. Looking for other opinions through.

You can make it much faster and reliable if you initialize it with a reasonable estimate of where the clusters are, and e.g. by providing an initial covariance matrix.

That data looks well-behaved enough so that EM should just work, so try it.

It also is an option to simply first cut your data set into the observed pieces, then model each grid cell separately.

3
Ascertaining what clustering algorithm to use in various situations
1
How to reduce number of points for clustering
5
Clustering methods for unknown number of clusters
2
Performing clustering after “seeing” that there are 3 clusters on the PCA scatter plot
0
What neural network architecture can I use to take advantage of clusters in the data?