Which matrix should be interpreted in factor analysis: pattern matrix or structure matrix?

When doing a factor analysis (by principal axis factoring, for example) or a principal component analysis as factor analysis, and having performed an oblique rotation of the loadings, - which matrix do you use then in order to understand which items load on which factors and to interpret the factors, - pattern matrix or structure matrix?

I read in a book that most researchers often use the pattern matrix because it's easier to analyze, but the author suggested to double check the results with those of the structure matrix. However in my case there are many differences between these two tables and I don't know which one to use in order to specify and label my factors.

Let me recommend you first to read this Q/A. It is about rotations and can hint towards or partly answer your question.

A more specific answer from me about interpretation might be as follows. Theoretically, factor of Factor analysis is a univariate latent feature, or essence. It is not the same thing as a set or cluster of phenomena. Term "construct" in psychometry is generic and could be conceptualized as factor (essence) or cluster (prototype) or something else. Since factor is univariate essence it should be interpreted as the (relatively simple) meaning lying on (or "behind") the intersection of the meanings/contents of the variables loaded by the factor.

With oblique rotation, factors are not orthogonal; still, we usually prefer to interpret a factor as clean entity from the other factors. That is, ideally, factor X label would dissociate from a correlated factor Y label, to stress individuality of both factors, while assuming that "in outer reality" they correlate. Correlatedness thus gets to be an isolated characteristic of entities from the labels of the entities.

If it is this the strategy typically preferred then pattern matrix appears to be the main tool for interpretation. Coefficients of pattern matrix are the unique loads or investments of the given factor into variables. Because it is regression coefficients$^1$. [I insist that it is better to say "factor loads variable" than "variable loads factor".] Structure matrix contains (zero-order) correlations between factors and variables. The more two factors X and Y correlate with each other the greater can be the discrepancy between the pattern loadings and the structure loadings on some variable V. While V ought to correlate higher and higher with both factors, the regression coefficients can rise both or only one of the two. The latter case will mean that it is that part of X which is different from Y what loads V so much; and thence the V-X pattern coefficient is what is highly valuable in interpretation of X.

Structure matrix seems to me potentially better than pattern matrix in back interpretation of variables by factors, if such a task arises. And it can rise when we validate items in questionnaire construction, - that is, decide which variables to select and which to drop in the scale being created. Just remember that in psychometry common validity coefficient is correlation (and not regression) coefficient between construct/criterion and item. Usually I include an item in a scale this way: (1) look at maximal correlation (structure matrix) in the item's row; (2) if the value is above a threshold (say, .40), select the item if its situation in pattern matrix confirms the decision (i.e. the item is loaded by the factor - and desirably only by this one - which scale we're constructing). Also factor scores coefficient matrix is what is useful in addition to pattern and structure loadings in the job of selection items for a factor construct.

If you do not perceive a construct as univariate trait then using classic factor analysis would be questioned. Factor is thin and sleek, it is not like pangolin or armful of whatever. Variable loaded by it is its mask: factor in it shows through what appears to be completely not that factor in it.

$^1$ Pattern loadings are the regression coefficients of the factor model equation. It the model, the being predicted variable is meant either standardized (in a FA of correlations) or centered (in a FA of covariances) observed feature, while the factors are meant standardized (with variance 1) latent features. Coefficients of that linear combination are the pattern matrix values. As comes clear from pictures below here - pattern coefficients are never greater than structure coefficients which are correlations or covariances between the being predicted variable and the standardized factors.

Some geometry. Loadings are coordinates of variables (as their vector endpoints) in the factor space. We use to encounter those on "loading plots" and "biplots". See formulas. 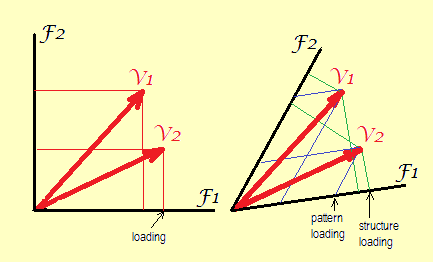 Left. Without rotation or with orthogonal rotation, axes (factors) are geometrically orthogonal (as well as statistically uncorrelated) to each other. The only coordinates possible are square like what are shown. That is what is called "factor loading matrix" values.

Right. After oblique rotation factors are no longer orthogonal (and statistically they are correlated). Here two types of coordinates can be drawn: perpendicular (and that are structure values, correlations) and skew (or, to coin a word, "alloparallel": and that are pattern values, regression weights).

Of course, it is possible to plot pattern or structure coordinates while forcing the axes to be geometrically orthogonal on the plot - it is what when you take the table of the loadings (pattern or structure) and give to your software to build a standard scatterplot of those, - but then the angle between the variable vectors will appear widened. And so it will be a distorted loading plot, since the aforesaid original angle was the correlation coefficient between the variables.

See detailed explanation of a loading plot (in settings of orthogonal factors) here.

Not the answer you're looking for? Browse other questions tagged pca interpretation factor-analysis rotation or ask your own question.

38
What is the intuitive reason behind doing rotations in Factor Analysis/PCA & how to select appropriate rotation?
20
What is the proper association measure of a variable with a PCA component (on a biplot / loading plot)?
19
PCA and exploratory Factor Analysis on the same dataset: differences and similarities; factor model vs PCA
21
Methods to compute factor scores, and what is the “score coefficient” matrix in PCA or factor analysis?
12
In Factor Analysis (or in PCA), what does it mean a factor loading greater than 1?
13
Sum of rating scores vs estimated factor scores?
6
Clustering of variables: but they are mixed type, some are numeric, some are categorical
8
Cluster analysis vs Factor analysis as a means for “grouping” variables or cases
3
A textbook error w.r.t structure and pattern loadings
3
Understanding (exploratory) factor analysis: some points for clarification
See more linked questions

17
Interpreting discrepancies between R and SPSS with exploratory factor analysis
4
How to apply published factor analysis loadings to sample data to compute factor scores?
3
Exploratory factor analysis - promax & factor cross-loadings
3
A textbook error w.r.t structure and pattern loadings
0
PCA with oblimin rotation: should I interpret component matrix, pattern matrix or structure matrix?
12
In Factor Analysis (or in PCA), what does it mean a factor loading greater than 1?