Anyone have a solution?

The very limited information you have is certainly a severe constraint! However, things aren't entirely hopeless.

We can estimate the noncentrality parameter given the two test statistics by taking their average and subtracting the degrees of freedom (a methods of moments estimator), giving an estimate of 44, or by maximum likelihood:

Good agreement between our two estimates, not actually surprising given two data points and the 18 degrees of freedom. Now to calculate a p-value:

So our p-value is 0.12, not sufficient to reject the null hypothesis that the two stimuli are the same.

Does this test actually have (roughly) a 5% reject rate when the noncentrality parameters are the same? Does it have any power? We'll attempt to answer these questions by constructing a power curve as follows. First, we fix the average $\lambda$ at the estimated value of 43.68. The alternative distributions for the two test statistics will be noncentral $\chi^2$ with 18 degrees of freedom and noncentrality parameters $(\lambda-\delta, \lambda+\delta)$ for $\delta = 1, 2, \dots, 15$. We'll simulate 10000 draws from these two distributions for each $\delta$ and see how often our test rejects at, say, the 90% and 95% level of confidence.

which gives the following: 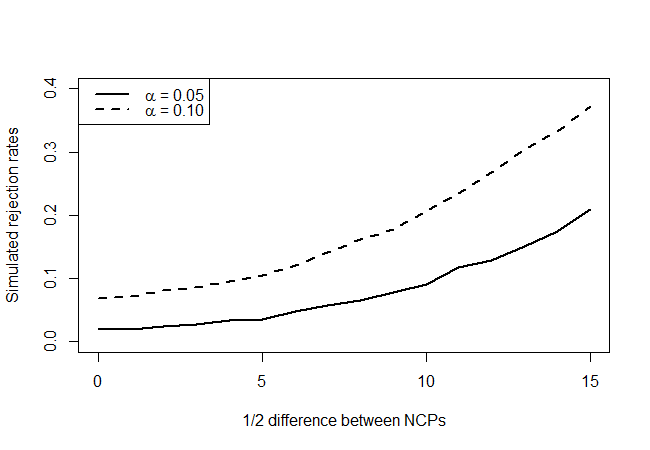 Looking at the true null hypothesis points (x-axis value = 0), we see that the test is conservative, in that it doesn't appear to reject as often as the level would indicate, but not overwhelmingly so. As we expected, it doesn't have much power, but it's better than nothing. I wonder if there are better tests out there, given the very limited amount of information you have available.

You could get the Cramer's V, which is interpretable as a correlation, convert it to a Fisher's Z, and then the confidence interval of that is straightforward (SE = 1/sqrt(n-3): Z ± se * 1.96). After you get the ends of the CI you can convert them back to r.

Have you considered putting all of your counts into a contingency table with a further dimension of experiment?

Not the answer you're looking for? Browse other questions tagged r confidence-interval chi-squared-test or ask your own question.

4
Chi Square for this case?
4
Alternative to Pearson's chi-square goodness of fit test, when expected counts < 5
0
Chi-square or binomial logistic regression?
0
Is the residual deviance / residual dof equivalent to reduced Chi^2?
2
In R, trying to find the confidence interval for the difference in proportions