Fitting a CDF to differentiate symbolically

I'm trying to curve fit a functional form to observed data - where my observed data is a physical observation that represents a CDF. 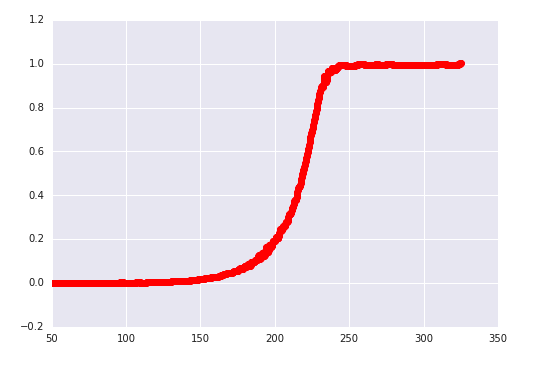 My goal is to get an accurate representation of the PDF. Just a visual inspection of the CDF looks good (I know... not that that means much).

If I take the second derivative of this function numerically there is TONS of noise introduced. This is what it looks like:

This is where I'm at. Can I fit a functional form to this CDF data so I can take a derivative symbolically?

What is the best way - in a statistical sense - to not lose information like bi-modal PDFs and other things like this. How can I include enough parameters in my functional form to include skewness, kurtosis, etc (to not force a perfectly Gaussian distribution)?

The original fit where all of this data derives from is the derivative of an options price to the strike. 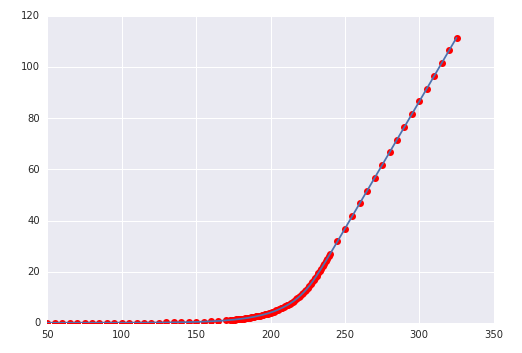 With the CDF, we can always use the Empirical Distribution Function (EDF) to get a consistent estimate of the CDF under mild assumptions (random independent draws from target distribution).

This is definitively not the case for density estimation. There is no way to get good estimates of the PDF without either enforcing smoothness (kernel density estimation or log-splines, for example) or other assumptions (belongs to parametric family, is log-concave, etc). This is because without any smoothness assumptions/priors, the distribution that would make the data we have seen most likely would be the distribution that puts probability $1/n$ on each of the data points we observed. Since we observed a finite data set, this is necessarily a discrete random variable, for which the PDF is undefined (i.e., it is defined by a probability mass function, not probability density function).

So let's dive into smoothness and assumptions. Parametric assumptions will generally have the best operating characteristics (i.e. lowest MSE) when the assumptions hold true, but can be heavily biased when this is false. As such, these methods are usually discarded for density estimation; choosing the wrong parametric family will have serious consequences (unlike, say linear regression, in which case OLS is known to still be a reasonable choice even if the data is not normal), and we typically have no good reason to believe that we know exactly what family the distribution belongs to.

If we decide to reject parametric assumptions, we can move to non-parametric models. Three of the most popular methods are kernel density estimation, Gaussian mixture models and log-splines. I do believe kernel density estimation is probably considered most popular, although that may differ by application. In all of these, we will need to select some sort smoothing parameter (bandwidth for kernel density estimation, number of components for GMM and number of knots for log-splines). Selection of smoothing parameter is crucial, yet non-trivial. There are automatic methods for selection (e.g., AIC), but be warned that these methods can still lead to some unsatisfying results.

In my experience, I've found kernel density estimation to be most reliable. In fact, R's density function uses this and the default settings tend to be quite reasonable. But be warned that you don't have to look too hard to find cases where the results may be unsatisfactory.

Not the answer you're looking for? Browse other questions tagged probability modeling pdf curve-fitting cdf or ask your own question.

2
Generating functional-form PDF from Max Likelihood Estimation
1
How to fit a curve at a 95% “envelope” over data points
1
Fitting curve to non-decreasing data
5
Approximate density from moments and quantiles, then sample from it
0
Hypothesis test for arbitrary distribution