How to compare two plots - an alternative for AUC?

Below I attached an example which I would like to analyze. 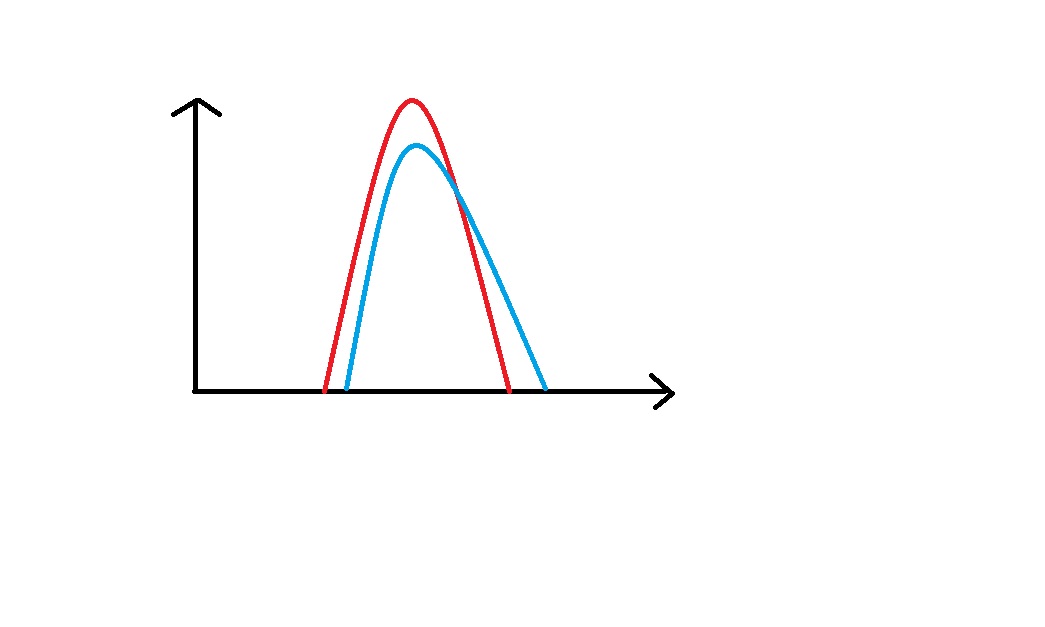 Let's for the example purposes assume, that these plots show the activity of two different drugs which were tested. On the Y axis we have "intensity" of this drug and on the X axis we have a period of time how long is a lifetime of this drug. At this moment I use integrate.xy function to compare those plots, but I am looking for some alternative.

For this experiment the height (intensity) is more important than the time it was in the system. Is there any way to compare those curves with an assumption of "intensity" importance? Or is the AUC the best solution?

What kind of function should be used for it in R ?

Short answer, yes, there are methods of so doing. Longer answer; it is unclear what and how you obtained the parameters so that at present, without that clarification; Half-life of what when?, Effect measured how?, it is not possible to formulate an unambiguous answer to the question asked.

2) How is the half-life measured? Half-life of a drug is not constant in time, e.g., see this. That is, a half-life depends on when it is measured, and the longer one waits to measure it, the longer that half-life is. Perhaps you want to measure the mean residence time of the drug, which is at least theoretically more invariant with elapsed time?

Make you a deal, you answer my questions, I will attempt to answer yours.

You asked a question of moderate difficulty--(What is)...an alternative to AUC? Note further, you asked about drugs, and then related that your concern was something else entirely. I can answer the question in the context of drugs, which should give you a very good idea of what happens in general, but, is not a general answer, nor is it specific to your unstated application. Please do not go and change the context again, it is exhausting enough to give an answer specific to the question as is currently stated.

In some situations, AUC of drug plasma concentration versus straight time (and not half-life) is the conventional first approximation to drug effect following bolus intravenous dosing for first order drug kinetics. Not all elimination is first order (i.e., proportional to concentration) as some eliminations are enzyme-saturable, see Michaelis-Menton, and some drug effects are not proportional either (see below). Moreover, beware! To quote George Box, "Essentially, all models are wrong, but some are useful." For example, a fat-tailed Pareto distribution, if the exponent is small enough, has no mean residence time. The best, but still likely incorrect, current modelling hinting at why this might be true has to do with a dispute concerning right tail heaviness of $C(t)$, which as herein is evaluated properly via survival functions, and appears in Plos One (acknowledgement: With apologies, my own work.).

There have been attempts to modify AUC calculations for practical application to patient care, read Clavert et al$^1$ and Newell et al$^2$ for starters. However, current modelling is not always straightforward, see anesthesia models$^3$.

There have been fairly predictive but only approximate drug-effect models presented under the banner of PKPD.

You also ask if the intensity of drug effect can be more important than AUC. Indeed, it can be, and sometimes is enormously different. Rather than use the formal language of binary outcomes versus continuous proportional effect plus blah blah blah, let's consider a simple example. A mathematically trivial but devastating example is intravenous injection of potassium chloride. That is, if KCl concentration is high enough, the heart stops beating, death ensues, and utility of AUC is discounted by a lack of stationarity, which is another assumption needed for the application of AUC.

The function which has to be used is depended on the application. If we are talking about drugs efficiency I would go for AUC. Have you thought about taking total intensity ? Maybe that would be ok for you.

Not the answer you're looking for? Browse other questions tagged r data-visualization auc or ask your own question.

52
Which has the heavier tail, lognormal or gamma?

3
Using scatter plots to understand multiple values of Y for a given X
3
R module for creating plots of prototypical individuals from fitted models?
36
Why is AUC higher for a classifier that is less accurate than for one that is more accurate?
1
How can I calculate the AUC of combined variables using SPSS
0
How to interpret plots of point pattern models
1
Clusters of variables interpretation
0
I have two groups of data with (the same) two variables each, how can I plot these groups against eachother?
1
How to calculate drug enrichment curves using AUC?