What is the non-asymptotic relative power of non-parametric tests?

The relative asymptotic power of non-parametric tests is reported to be high. What is the power of tests such as Wilcoxon Signed Rank Test and Mann-Whitney U with N's of 10, 20, 50, for example, as compared with t-tests?

nonparametric statistical-power
Share
Improve this question
edited May 6 '12 at 11:15

As mentioned in the comments, this question has no answer because it depends on extra assumptions: the alpha level of the test, the distribution of your sample and whether or not you assume independence.

If you make those assumptions, we can get the answer with R. For example, assuming that variables are Gaussian and independent you can get the relative power with the following code:

With this you can get a relative power curve as follows.

To save you the trouble of running this (quite long) simulation, here is the picture I got. 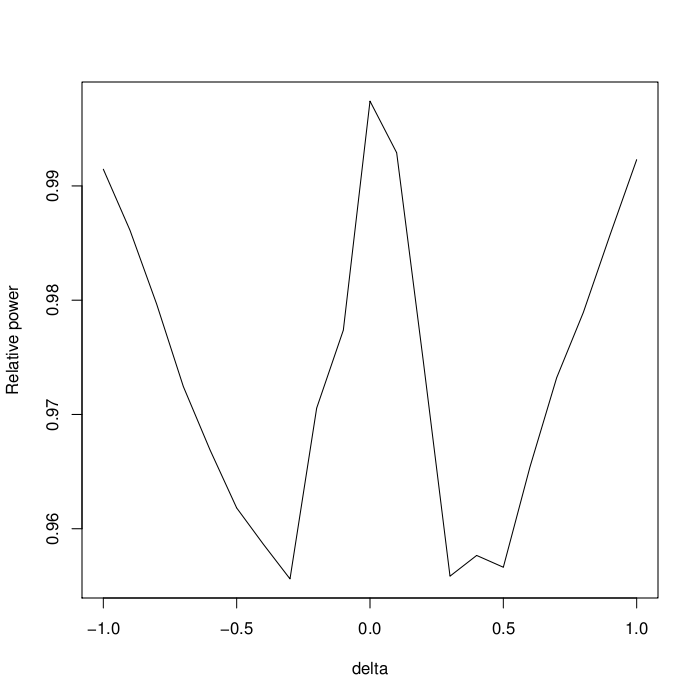 As you can see, the relative power is W-shaped with a minimum for delta around 0.3 standard deviations. Yet the variation is not very large: in this particular case, the relative power does not vary by more than 5%. Also note that the value for delta = 0 should be exactly 1 because both tests have exactly the same chance of rejecting the null hypothesis (namely 5% in this case).

Not the answer you're looking for? Browse other questions tagged nonparametric statistical-power or ask your own question.