I have a time series $x_t\in\mathbb{R}^n$ where $t=1,\dots T$. For some $t$, I have also a message which is a piece of text, i.e. sequence of characters of unspecified length. I assume that the messages provide some information about the time series.

My goal is to obtain a precise model of $x$, taking advantage of both past $x$ values and messages.

How to do it? What is the best model?

I am considering recurrent neural networks in tensorflow. How would you model and train this problem?

My thoughts so far (brute force a little bit): to define a RNN with $n$ inputs, primarily for $x$. I intend to use it for "reading" all the history. That means when a message is received at time $t$, I split it into $n$-tuples of characters and I use them as input to the network. All inputs normalized, last $n$-tuple may be prolonged by blank characters if needed.

Then for RNN A, before outputting the next value of $x$ you concatenate its output with the output RNN B and pass them both as features to a fully connected layer.

Here is a crude drawing of what I mean: 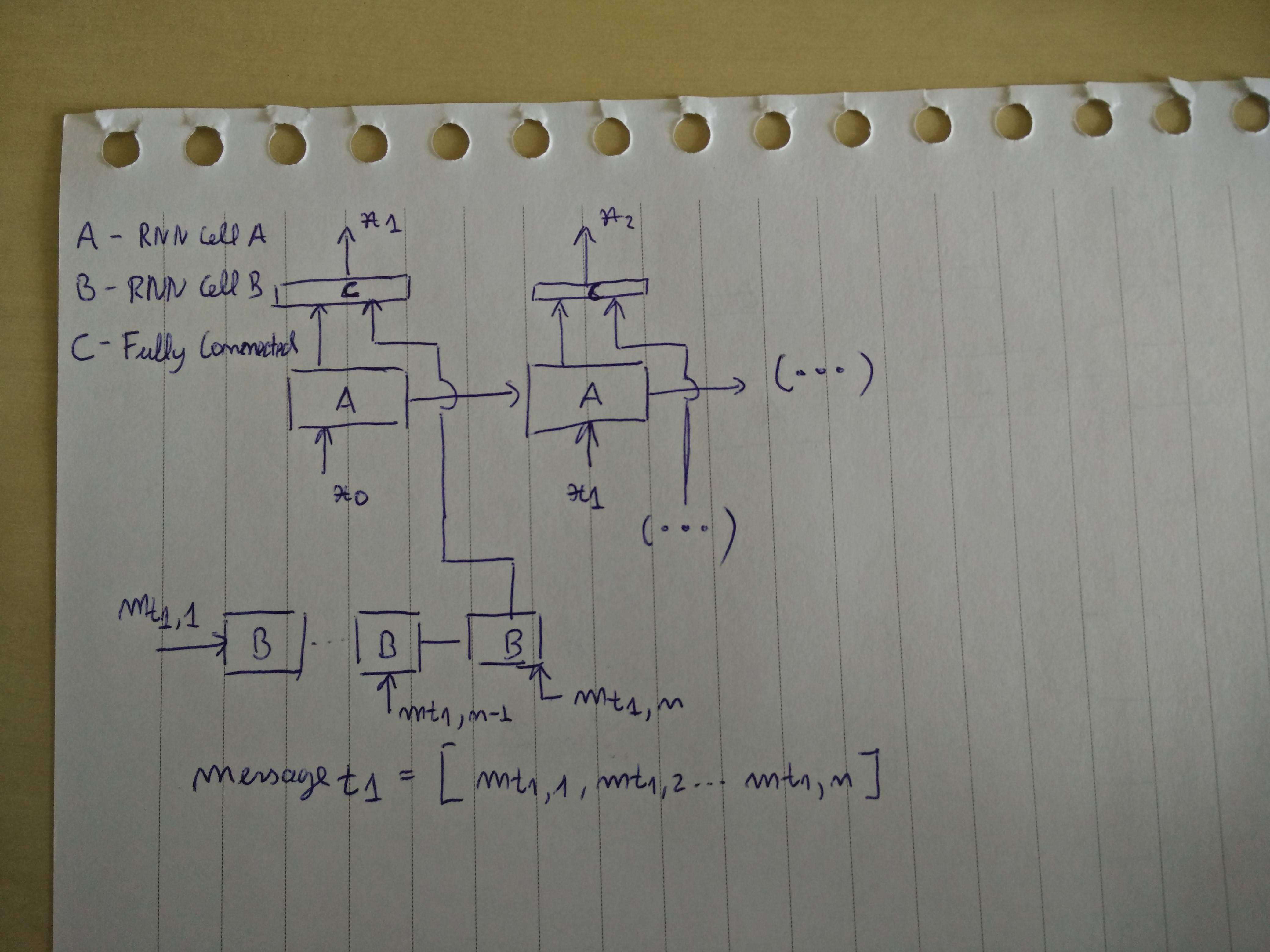 This way the next predicted value of $x$ will take into consideration both previous values of $x$ and the message received at that time. If you don't receive a message at all times I would just have a message with the blank token as input for those times. I don't know if this has been done before, if it works or how computationally feasible it is, but it sounds like a fun architecture to implement in tensorflow.

Here is some tensorflow pseudo code inspired by this tutorial that uses LSTMs (an extension of the RNN):

Note that this is just pseudo code and won't work on its own and there are probably better ways of doing it, but you can get the general idea. I strongly recommend you read through the tutorial I mentioned, and if you've never implemented an RNN or used tensorflow before maybe try something simpler first to get acquainted with the technology.

Not the answer you're looking for? Browse other questions tagged time-series neural-networks natural-language tensorflow rnn or ask your own question.

4
Time-series with RNN - how to deal with attributes that span entire sequences?
3
Training a RNN on time series: How to cope with different sequence origins?
1
LSTM RNN Time-Series Residual
1
How to deal with really sparse time series data for a binary classification task using RNN or LSTM?
0
RNN Loss in Sentiment Analysis