Here is a following question:

There's a game where you are given two fair six-sided dice and asked to roll. If the sum of the values on the dice equals seven, then you win 21 dollars. However, you must pay 5 dollars to play each time you roll both dice. Do you play this game? And in follow-up: What is the probability of making money from this game?

I was thinking that because the expected number of throws before a win is $1/p$ (i.e. $6$), that it would not be wise to play this game since the expected loss $\$ 30$ is greater than the potential gain $ \$21$. Is this correct logic?

While your logic is fine, the usual approach to the logic would be to compute the expected return of a roll, not base it off the expected number of throws to a win.

The question about "probability of making money from this game" is not really answerable, since previously in the question it was made clear that we're not simply pondering rolling exactly once (...each time you roll both dice) but does not specify how many times we roll/what our stopping criterion may be. You could compute the probability of making money from a single roll but that's not what it seems to be asking.

There's an implied assumption in the question that is not justified -- that nobody would play a game which had negative expected return.

Often elementary probability questions rely on this assumption that the only possible choice is to base decisions of expected value but this is emphatically not the case. It is at odds with what we observe -- in fact many people are not only content to knowingly make negative-expectation bets -- many approach such a prospect with eagerness.

If such a decision was based on amount of enjoyment derived per dollar spent compared with alternatives for spending the same money in other ways (taking a friend out to dinner, or going to see a movie, or whatever else you spend money on), then it may be perfectly rational to take a losing gamble.

I've watched many a friend or relative gamble a few dollars per week on a lottery (with a substantial negative expectation) and they certainly seem to get enjoyment from watching the draw take place. To my mind the length of enjoyment is considerably too brief for the dollars paid compared to alternatives, but that's their judgement to make, not mine -- and in any case perhaps they're enjoying the times before the draw as well. [Problems can arise when it's not the case that such a weighing of alternatives is made, since we're often not particularly rational in our behavior and may continue to make choices we can see are poor.]

By the same token, a risk-averse person may be perfectly rational in avoiding a one-off gamble with positive expectation, because they dislike the downside more than they enjoy the upside.

I like the computational approach. It is no more or less true than others, but to me, it gives a framework that allows me to test things and as long as my setup is clean and correct, I can find outcomes that might not seem intuitive.

Here is how I would simulate it:

Here is the code I might use for your problem.

It gives a money lost per trial of:

It also gives the graph of net profits over time as: 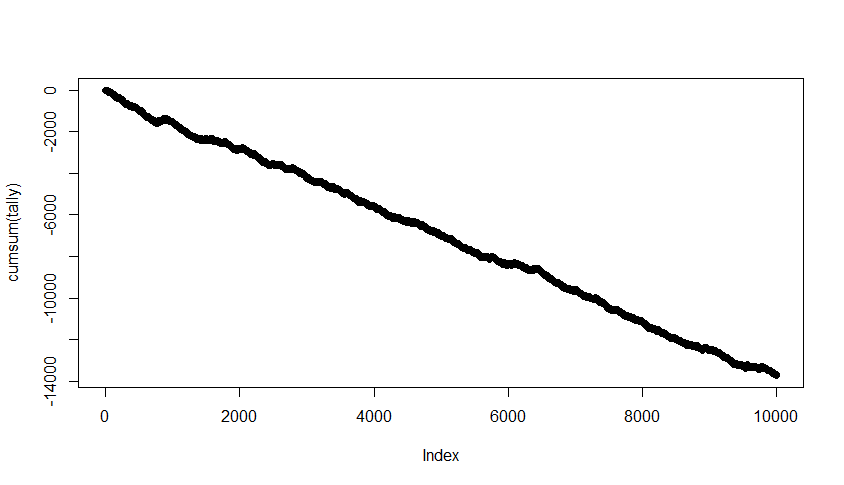 One of the things this gives is ways forward, for me, to answer questions like these:

I can change the "win_val" and "play_val" and see what works.

Here's a short answer. Call the outcomes from the two dice X and Y. There are total 36 possible outcomes for (X,Y).

You shouldn't play this game!

your logic is just fine, except that in your explanation it's not the expected number of rolls BEFORE a win but INCLUDING the win which is 6. all calculations are correct though. on average, you'd loose 30-21=9 dollars with every 6 rolls or 1.5 dollar per roll. don't play that game.

3
How to make optimal decisions with uncertain outcomes: achieving a "Yahtzee"
0
Expected rolls to get n result k times non-consecutively
4
Dice Probability Game
2
Expected amount of dice tosses in two games
4
What is the probability of getting three pairs that makes up seven when six dice are rolled?
16
Expected rolls to roll every number on a dice an odd number of times
2
How many rolls required for 90% chance to reach expected values of consecutive dice rolls in tabletop game?