I know that $\int_{0}^{\infty} 1-F(t) dt$ is the expectation of a random variable. But what happens when the upper limit is some finite number like so? \begin{align*} \int_{0}^{x} 1-F(t) dt \end{align*} where F is the CDF of a gamma distribution and $F(x)<1$. What's the interpretation? Are there any other, more intuitive, forms to represent this?

I tried to understand the meaning by calculating the above for Uniform[0,1] distribution over interval [0,1/2] which resulted in 1/8. But it still isn't intuitive.

Finally, in special case of Erlang distribution, since it results from adding a bunch of exponentially distributed random variables, I thought that maybe I need to look into renewal functions from stochastic processes to get a better understanding of the above integral but no success so far.

You can still use the same argument as Firefeather Find expected value using cdf. In this answer I describe a more intuitive view of the integration while copying the proof for your case:

The $\int_0^a \int_t^a$ is an integration on the domain of a triangle and a rectangular. 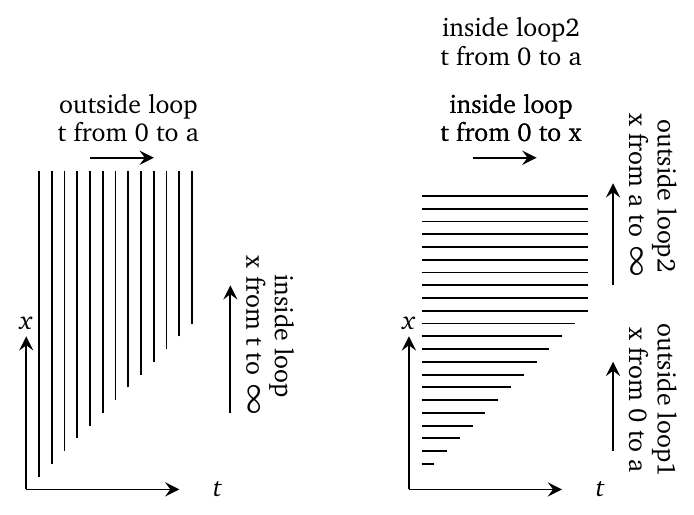 See in the image how the integration is on a triangle and you can make triangle by either vertical strips with x from t to a or with horizonttal strips with t from 0 to x.

These horizontal strips $\int_0^x$ can be changed into $x f(x)\vert_0^x$. We should emphasize that the integrand f_X(x) changes in the vertical direction and not the horizontal direction so $\int f_X(x) dt = t f_X(x)$.

For an interpretation I am still lost.

Not the answer you're looking for? Browse other questions tagged cdf conditional-expectation intuition or ask your own question.

1
Probability of having real roots
6
What is the limiting distribution of exponential variates modulo 1?
1
Waiting time for the first event in an Exponential Distribution with different rate parameters
1
Upper bound of normal cdf
0
Asymptotic Distribution of Minimum Uniform Random Variables
4
Obtaining cdf from pdf when pdf is defined on limited region/support