I have empirically noticed and interesting phenomenon. Suppose we have two continuous random variables $X$ and $Y$ which are dependent but not correlated. For instance:

You can use the following Python code to generate samples for these variables and check that they are indeed dependent but not correlated (I use this implementation of distance correlation as a measure for dependence): 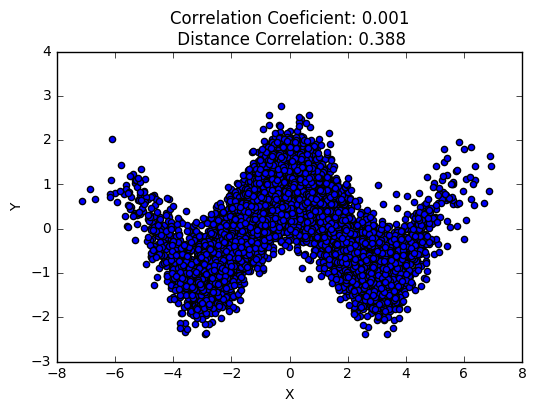 I know that by the Central Limit Theorem $X_{sum}$ and $Y_{sum}$ will be approximately normal, but why are they becoming independent? Is there a general explanation for this?. Also, I have noticed that this phenomenon only occurs if $X$ and $Y$ are not correlated.

I was able to figure out the answer with the help of the folks at Mathematics Stack Exchange.

Consider the random vector $[X_{sum}$, $Y_{sum}]^\top$. Since this vector is the sum of $n$ i.i.d. random vectors, the multidimensional CLT applies and we can ensure that

where the covariance matrix $\Sigma$ is:

Also note that we are interested in $[X_{sum}$, $Y_{sum}]^\top$; but this is the same as the above vector multiplied by a constant and translated, so the independence of the variables that form it is not affected.

Not the answer you're looking for? Browse other questions tagged correlation random-variable independence central-limit-theorem or ask your own question.