What test should I use with a non-normal distribution?

I'm working in a small project but I've a problem trying to choose a statistical test to use.

I want to contrast the fetal death rate (Total fetal deaths/Total pregnancies) between 4 regions of my country, so I've downloaded the data from the last 4 years and created a table Months vs Regions. The problem is that one region has a less density population so the rate in almost all of the months is 0.

I was looking to use a T-paired test (I need to use a statistical test to demonstrate the difference between each region against others), but the region I told before doesn´t follow a normal distribution. Is T-paired test robust enough to assume normality in this condition? 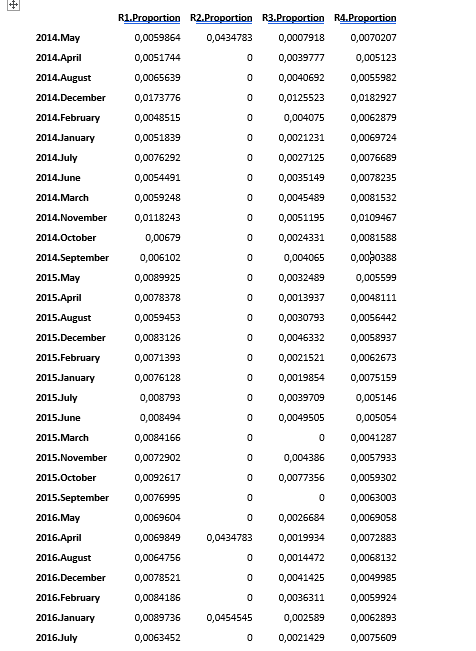 A paired t-test would probably not be robust enough, given that the data are bounded at zero.

You could use a mixed-effects beta regression to model proportional data that are collected over time. A way to do this with free software is the gamlss R package.

The beta distribution can be used to model dependent variables that are bounded between 0 and 1, making them perfect contenders to model proportions and ratios.

However, you observe zeros, so you will need what is called a zero-inflated beta regression model. This can be used by specifying the family argument in the gamlss package as BEINFO for BEta INFlated at 0.

The package also has a re() and random() functions to model random effects. You could make region a predictor and allow observations to be nested within time points, for instance.

Instead of using the ratio's you can stay more close to your raw numbers.

Basically these are binomial distributed data (the number of deaths per total amount pregnancies) where the probability parameter is to be estimated and compared.

You can do this with a https://en.wikipedia.org/wiki/Binomial_regression which you find in most software environments under GLM (generalized linear model) an extension/variant of ordinary least squares regression.

This beta-regression is what you would use when you consider the variability of the probabilities/ratios themselves (not the variability in the sampling of the individuals from the population with a specific probability).

Example: say you wish to know the difference between the difference in school performance between boys and girls. You measure (sample) at several schools performance of several boys and girls in order to estimate the state of the whole population of boys and girls. Then you will have two (nested) sources of error due to random sampling. (1) One is that the sampling of students at a specific school may not include all the students at that school. So your sample will only be an estimate of the true rates of performance at that school. (2) another is that the schools themselves may have variation in their individual school mean performance, and you will make an estimate about the grand mean performance of all schools based on a random variation in your sample.

Especially since you have low numbers (meaning large sample errors in the counting of cases within the groups) I believe that a binomial distribution is the best to model the distributions.

You might possibly consider a beta-binomial distribution (within a GLM framework you can use a quasi-binomial distribution family). although this may not be easily combined with mixed effects (at least in R I am unaware of functions that do this). But then again the changes due to month which you might consider as random effect should possibly not be considered as random, as in Gaussian distributed, but more something that follows a more strict pattern.

Not the answer you're looking for? Browse other questions tagged normal-distribution t-test paired-data or ask your own question.

0
What paired test should I use and how do I interpret it?
2
Crises: ANOVA? Or: how to analyse non-normal, non-Homogeneity data with different group sizes?
1
Which hypothesis test to use to compare two data sets that have a lot of zeros?
0
Paired sample t test with different scales
3
Should I use a paired sample t-test to compare two methods of measuring absorption lines?
1
Help with calculating number of animals for a fetal surgery experiment
1
Which significance test should be used to compare models based on Monte Carlo (holdout) cross-validation?
1
Can I use a chi-square test to determine whether my samples are independent or paired?