Is there a skewed probability density function that models a normal distribution with two parameters, $σ_1$ and $σ_2$?

Is there a way to model data that are skew normally distributed, but for which one builds in two seperate standard deviations?

The idea is that the values of $σ_1$ and $σ_2$ should be computed from the data; and together with the mean, give parameters to plot the representative probability density function. The result will look skew normally distributed, unless $σ_1 = σ_2$, in which case the PDF would be modeled as a normal curve. Importantly, the area under the probability density curve between $σ_1$ and the mean as well as the area between the mean and $σ_2$ should both be 34.1% of the probability and 68.2% when combined. 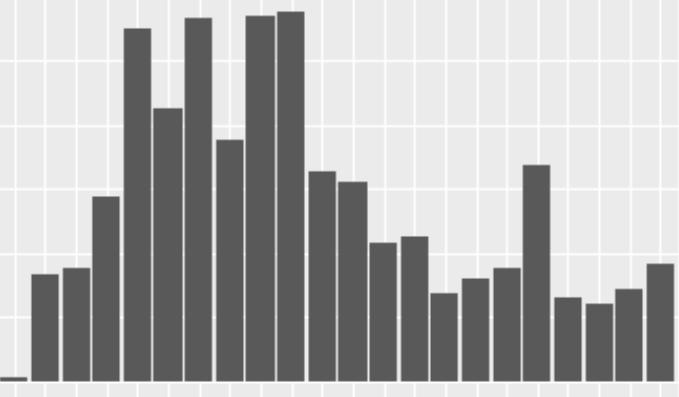 There is an elegant solution to this problem.

We'll calculate two normal curves, let's call them the lower curve and the higher curve (referring to lower and higher values of the dependent variable, viz. the left and right from the mean). 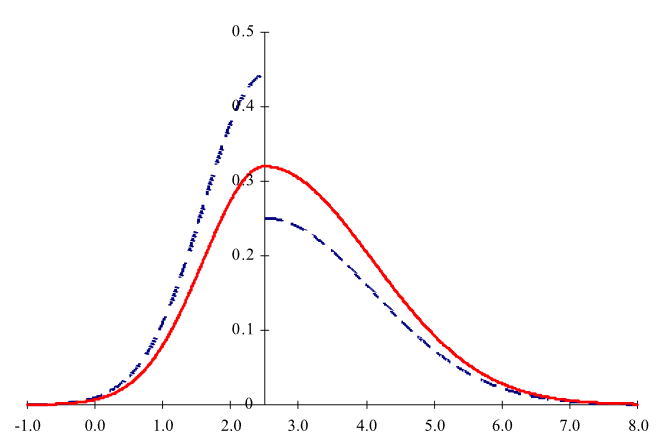 Then, the red solid line is the result of scaling the upper and the lower curve so that they meet at the mean.

You'll notice that we use the mean, and not the mode. The reason for this is that we care about the area of the curve, not the discrete frequencies. In fact, although it is only alluded to in the question, the use case for this question is in fact cumulative time series data.

This, however, invites the question: Since we have scaled, we also lose the 15.9% -> 50% -> 84.1% rule, and hence this breaks the requirement in the posted question. This leads us to the final modification.

There may be other (better) ways to modify the now continuous curve to spread the probability density back to the required 15.9% -> 50% -> 84.1% rule. However, probably the peak of the curve will have to be moved.

After this final modification, the curve retains the 50%-50% split about the mean, with a form that roughly matches the data; having been constructed from the halves of the two normal curves with sd's $σ_1$ and $σ_2$, respectively. Although the means are the same, the peak is shifted in the final step to distribute each 50% of the density correctly.

Not the answer you're looking for? Browse other questions tagged distributions standard-deviation pdf skewness skew-normal or ask your own question.