How to achieve linear relationship between predictors and logit of outcome?

1) How can I properly meet this assumption using splines? I've read that it's better to apply splines than transform the data, but I'm looking for clarification on the use of splines. For example, ponds_EDmha (x) appears linear after -0.5 and DistRoad (d) appears linear until -0.5 . Thus, should I write y~(x-0.5)+(d+0.5) instead of y~x+d? This follows instructions on how to center raw data using that method, but it seems very strange.

The data need to be standardized because the covariates are in a number of different units; should I instead apply a spline prior to standardizing data, and if so how?

2) How to apply a spline where a bimodal relationship exists? Like with aspen_m and upland_ha

I'm looking for a simplified explanation of splines or other methods to address non-linearity in the context of standardized predictors, and perhaps some R code 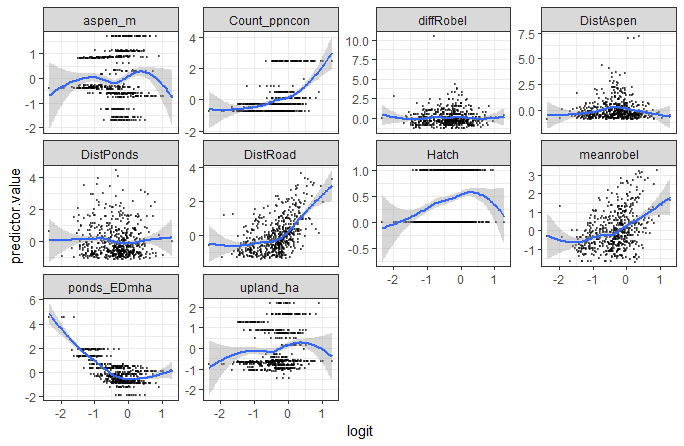 Edit: in response to comment I plotted logit ~ predictor values instead, and got the following plot. I'm now thinking that the relationships are linear enough not to worry about it. Count_ppncon isn't great but I intend to replace that covariate with a more relevant one anyway 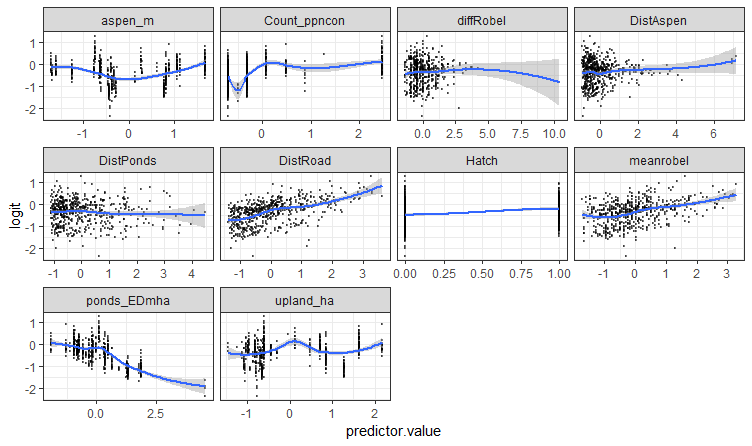 Given the distribution of some of the predictors it might be hard to tell whether a linear term is all that is needed. My main concern if I was fitting this model would be that some of the predictors are quite skewed and if it happens, for example, that high values for diffRobel and DistAspen belong to the same observation that observations might be quite influential in the model so I would suggest looking at regression diagnostics carefully after fitting the model.

Not the answer you're looking for? Browse other questions tagged regression logistic generalized-linear-model splines or ask your own question.

1
Assumption of linearity between variables and log odds in logistic regression
0
How can I analyse the association between a categorical variable (binary outcome) and a continous variable especially in R?

3
Nature of the Relationship between Predictors and Dependent in Regression
21
How should I check the assumption of linearity to the logit for the continuous independent variables in logistic regression analysis?
2
Correcting nonlinear relationship between continuous predictor and logit of dependent variable (Binary logistic regression)
1
Censoring linearly splined predictor in regression
3
Get odds ratios with confidence intervals from a lasso regression model