Recall and AUC of a binary classifier

Is it possible for a binary classifier to have a recall of 0.0 for one of the classes and at the same time an area under the ROC curve (AUC) of 1.0 for the same class?

ROC curves are false negative rate vs true positive rate graph. If you have AUC = 1, by definition you have perfect classifier.

From Information retrieval viewpoint ; if you have AUC = 1 then you have perfect recall and perfect precision. You recall all documents which exists about this topic, also all the documents you recall are relevant to your topic.

I would like to add more information for response to commenter. 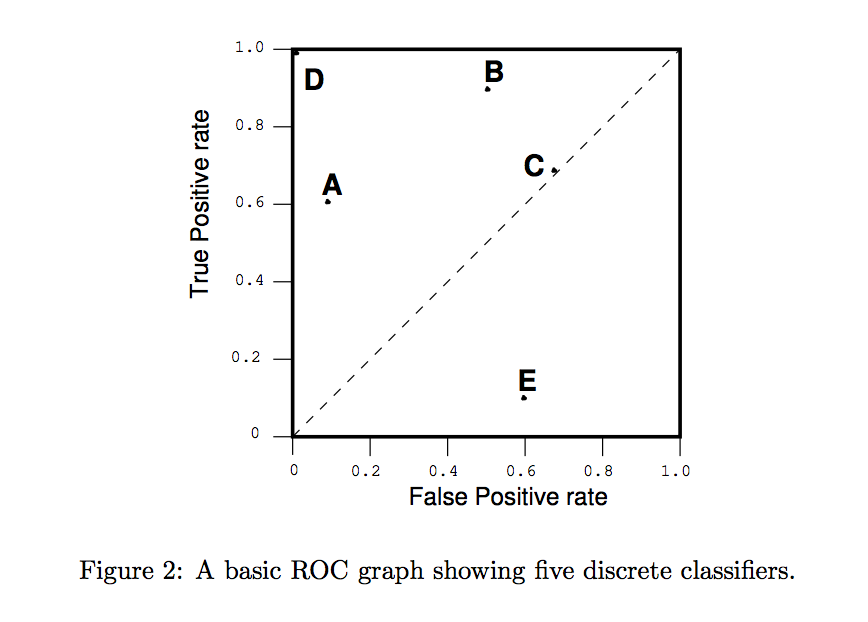 Bit late to the party, but I think the chosen answer is wrong, so here's my reasoning:

I think the confusion comes from using the "a classifier" with two different meanings:

The 2nd meaning classifier is one working point of a set of points (not entirely sure about term: the German term would be Schar) that together form the classifier in the first meaning, the parametrization being the threshold.

To generate the ROC, the threshold is varied from below the lowest observed score ("start") to above the highest observed score ("end"). This makes the curve start at (TPR 1.0; TNR 0.0) and end at (TPR 0.0; TNR 1.0). Note that these two points correspond to trivital classifiers (2nd meaning) that always predict the positive and negative class, respectively.

So each ROC contains at least one point (and "a classifier" in the 2nd sense) with recall 0.

Here's a graph produced from 4 cases with "predicted" scores 1, 2, 3, 4 and the first 2 cases and "reference" classes negative, negative, positive, positive. If you look at classifiers (2nd meaning) with threshold anywhere > 4, you end up at the red operating point which has recall 0, although the AUC is 1.0 for the classifier (1st meaning). 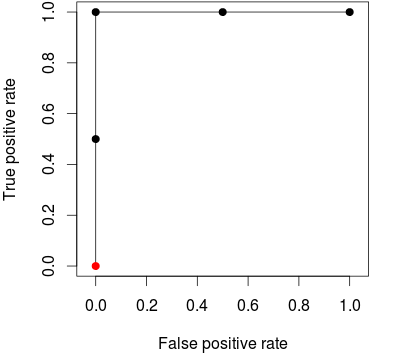 So far my example may look artificially constructed. After all, why would one in practice choose a threshold outside the predicted range?
However here are some points that come to my mind how one could be faced with such a situation in practice.

I used this R code to produce the graph:

Not the answer you're looking for? Browse other questions tagged data-mining roc auc or ask your own question.