Regression towards mediocrity by Galton

We have learned that the term regression which doesn't resemble anything of what it statistically does was coined by Galton in his study about the relationship of heights of father and the son. But I had never understood what his study illustrates the "regression" toward the mean because every textbook as well as the original study state that a tall father has a tall son (and vice versa), and this doesn't imply anything about regression toward the mean. In order to make that sense, a tall father should have a shorter son. But I realized that it might just mean that the slope of the regression line is less than one implying the positive deviation from the mean height for the father's height corresponds to the positive deviation from the mean for the son's but not as much as father's. Every time the son has another son, the eventual son will have the mean height. Is this what Galton meant?

Regression to the mean/mediocrity is related insofar as in the height experiment, a statistical procedure was performed to estimate a trendline relating the expected offspring height to the mean height of the parents. The fact that this was less than 1 was ultimately why Galton referred to it as mediocrity, so yes you are right there.

The idea that "everyone converges to one genetic blob" has been (and still is) a popular aspect of pop-science. Galton was wrong that convergence to mediocrity is inevitable because he failed to account for the phenotypic variance that is sure to produce new candidates for the tallest/shortest person ever. (the genetic variance of the next generation's height is no smaller than the parent's generation, i.e. there's no bottleneck effect).

Regression to the mean is still an important discussion in study designs. Studies which include participants with abnormal findings in variables that fluctuate (like weight or blood pressure) are expected to "Regress to the mean" somewhat merely as a result of achieving that eligibility criterion during one snapshot in time. That's one reason why it's so important to have a control group. 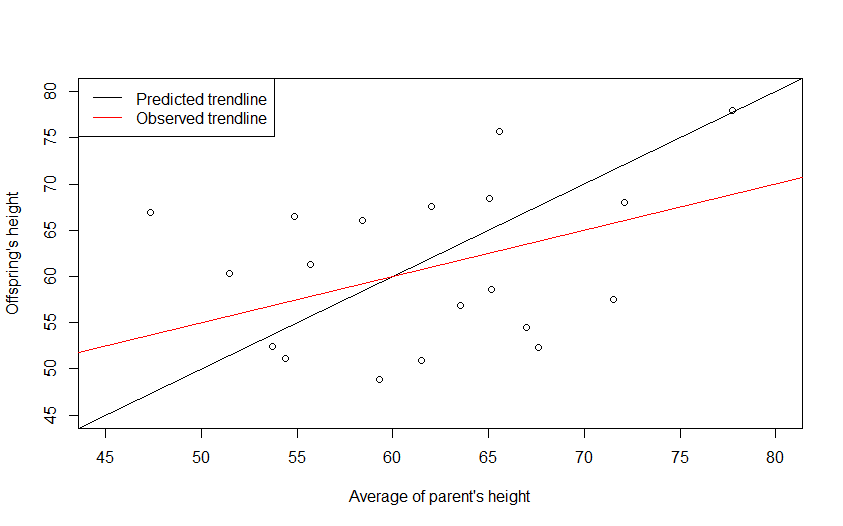 24
Understanding Simpson's paradox: Andrew Gelman's example with regressing income on sex and height
0
Multiple Correlation towards 2 target values
6
Gelman & Hill ARM textbook, Question 3.2, R-squared
7
Ridge regression: regularizing towards a value
0
Survey Analysis with regression - What affects attitude towards a product in ecom?
2
Is there any prediction model that takes into account the regression towards the mean?