After determining that my Cox model with a particular covariate (drug) was violating the proportional hazard assumption, I took steps to incorporate a time-dependent continuous coefficient given how I believe my survival time would be best modelled.

Firstly, without modelling time-dependence the cox model yields the following summary in addition to the assessment of the drug covariate:

And as a plot, the drug covariate is not constant over time with respects to Beta (green line is the risk coefficient). 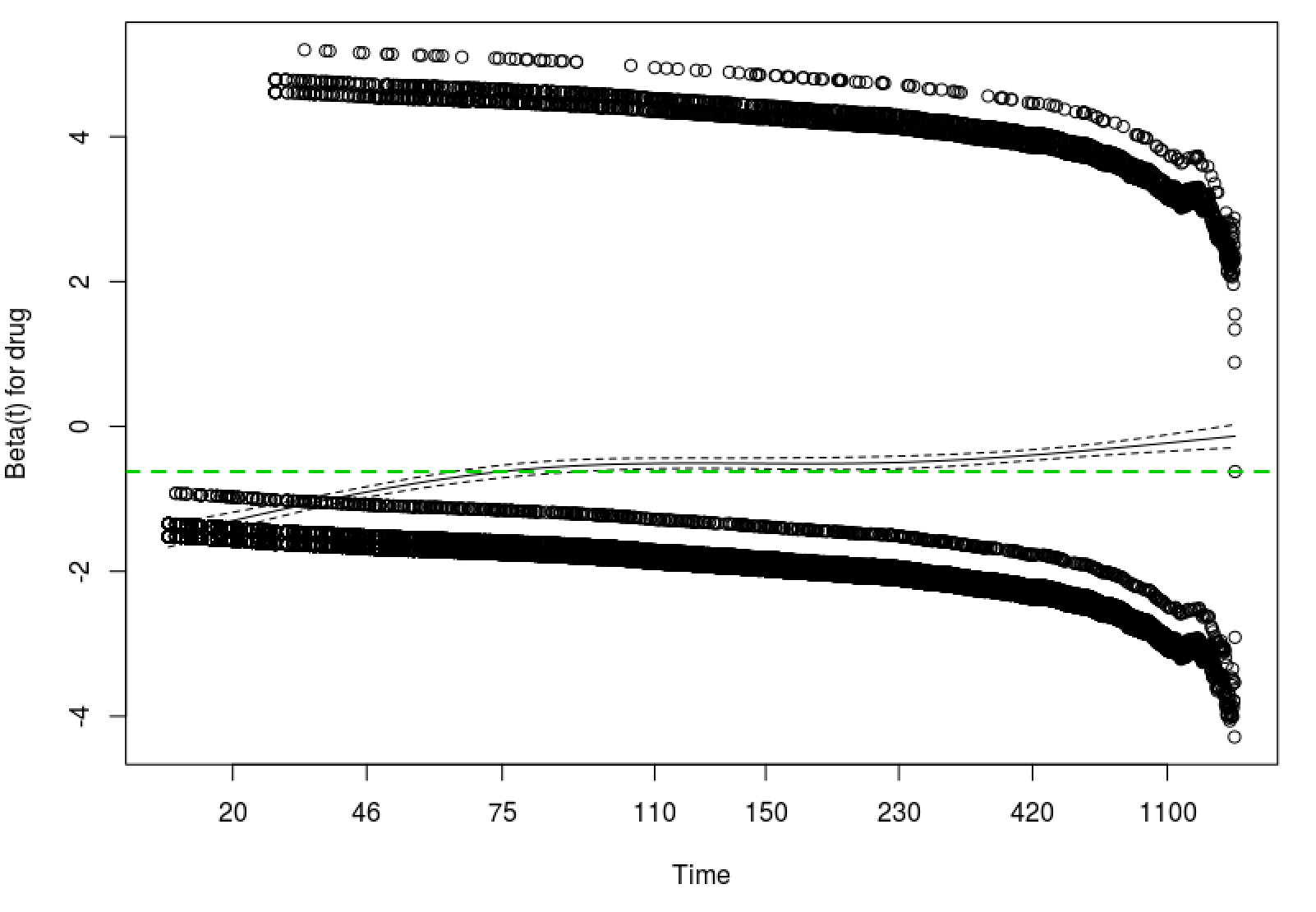 I have a good idea of how the effect the drug covariate should be having on the survival time i.e., this is a time to remission on patients undergoing treatment. Most patients get better sooner rather than later. Therefore, a rough estimate was to use an exponential probability of going into remission. The adjusted model, now with a time-dependent coefficient for Drug looks pretty awesome: 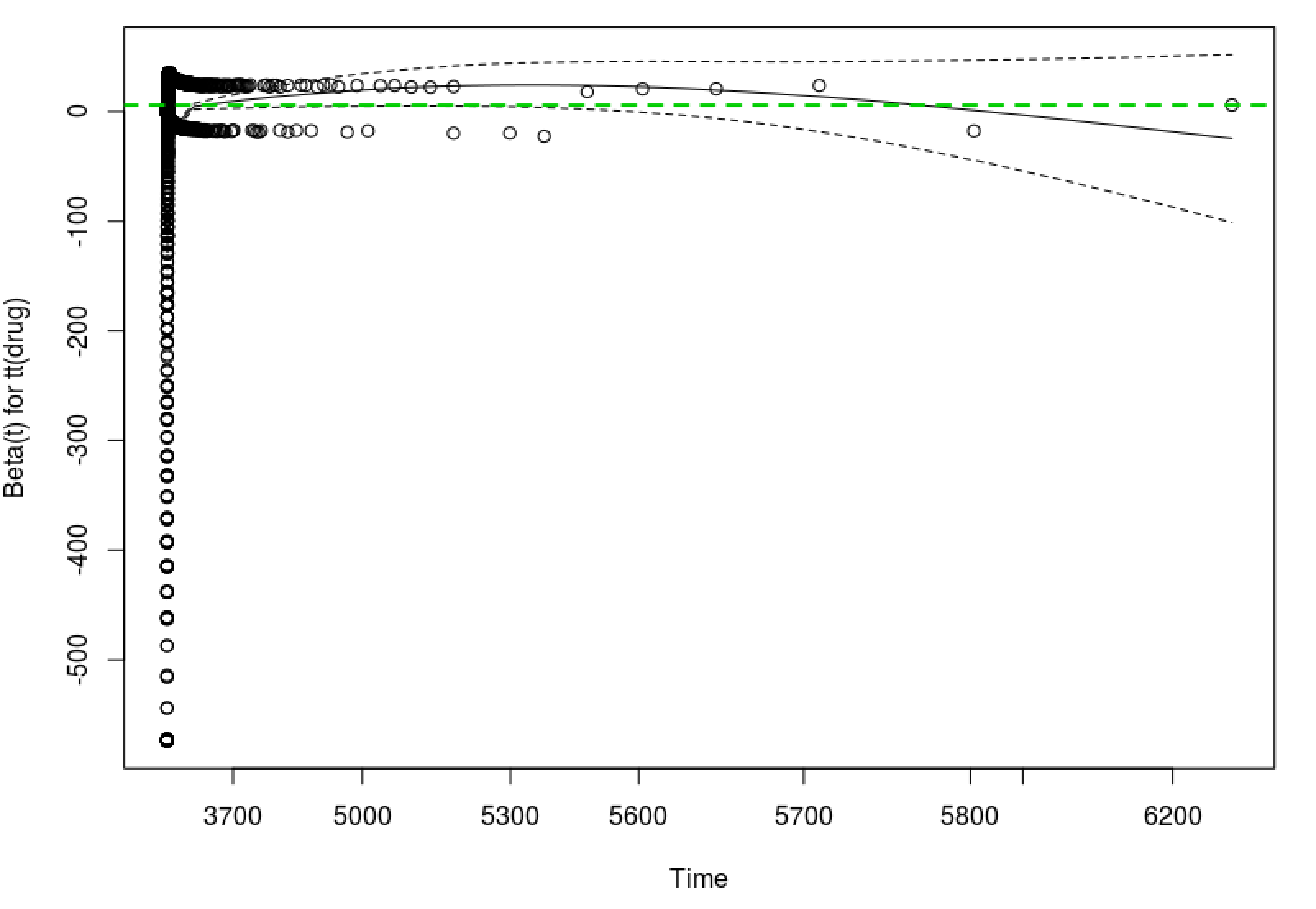 However, when I actually look at the significance, this new model is still suggesting that drug continues to violate the proportional hazard assumption. 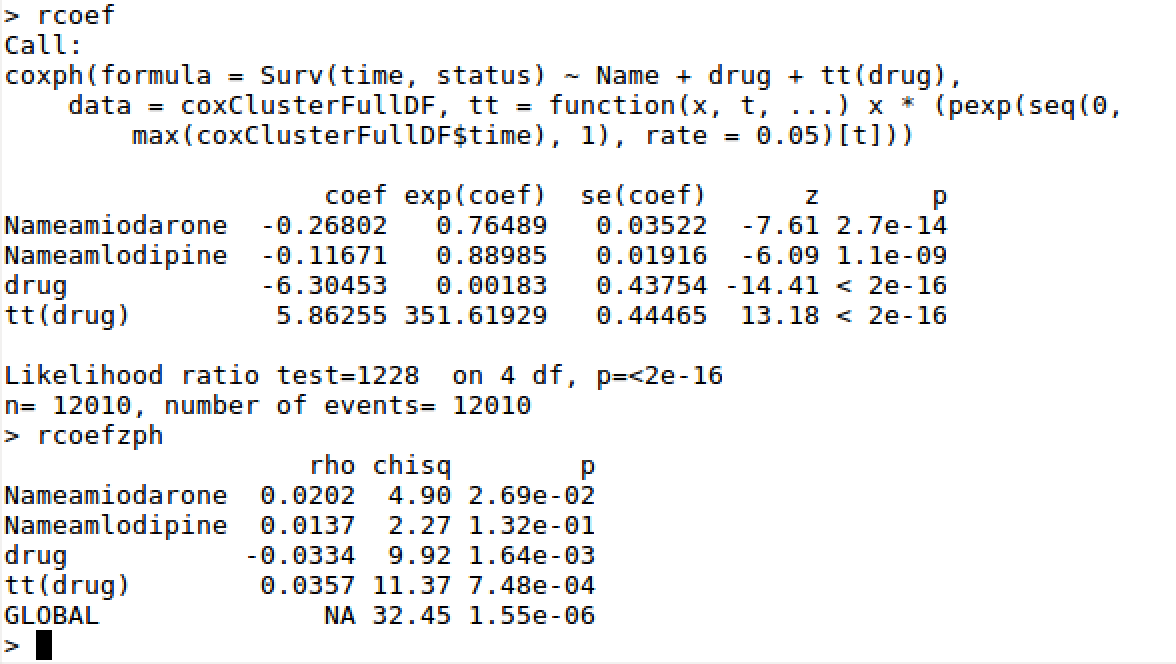 Given the above plot, I can't see why drug continues to violate. I would appreciate any thoughts. Perhaps, one thought would be that the leftmost time interval on the Beta vs time plot, doesn't actually fit the drug coefficient which I use an exponential function to model?

Zooming in near time=0 I can see exactly why fitting this particular function did not resolve the issue of correcting a time-dependence covariate. 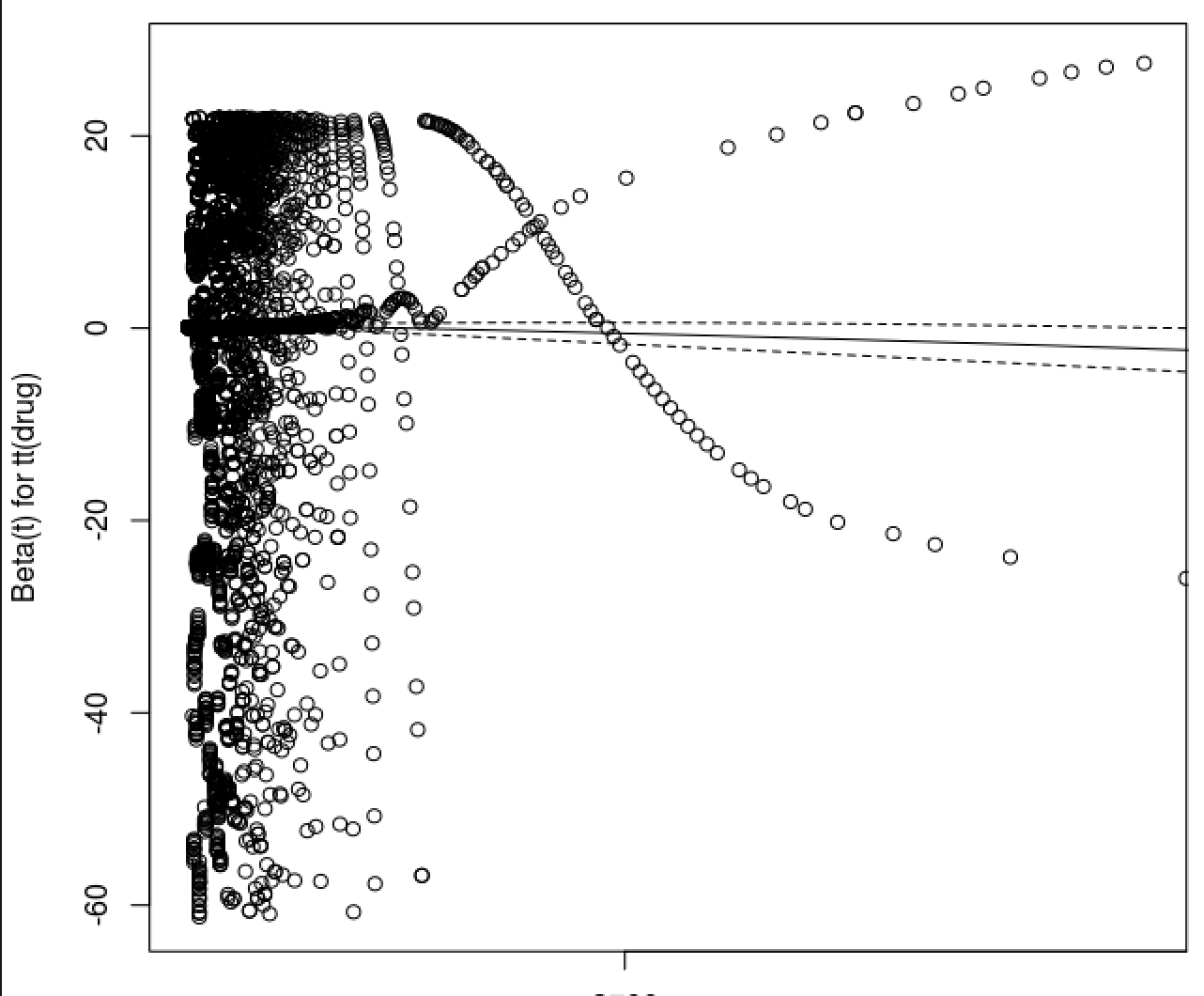 Sadly, I have no idea to progress from here. We really need this to be time-dependent.

I gave the survSplit approach a try: Before implementing time dependence:

Which resulted in the following plot: 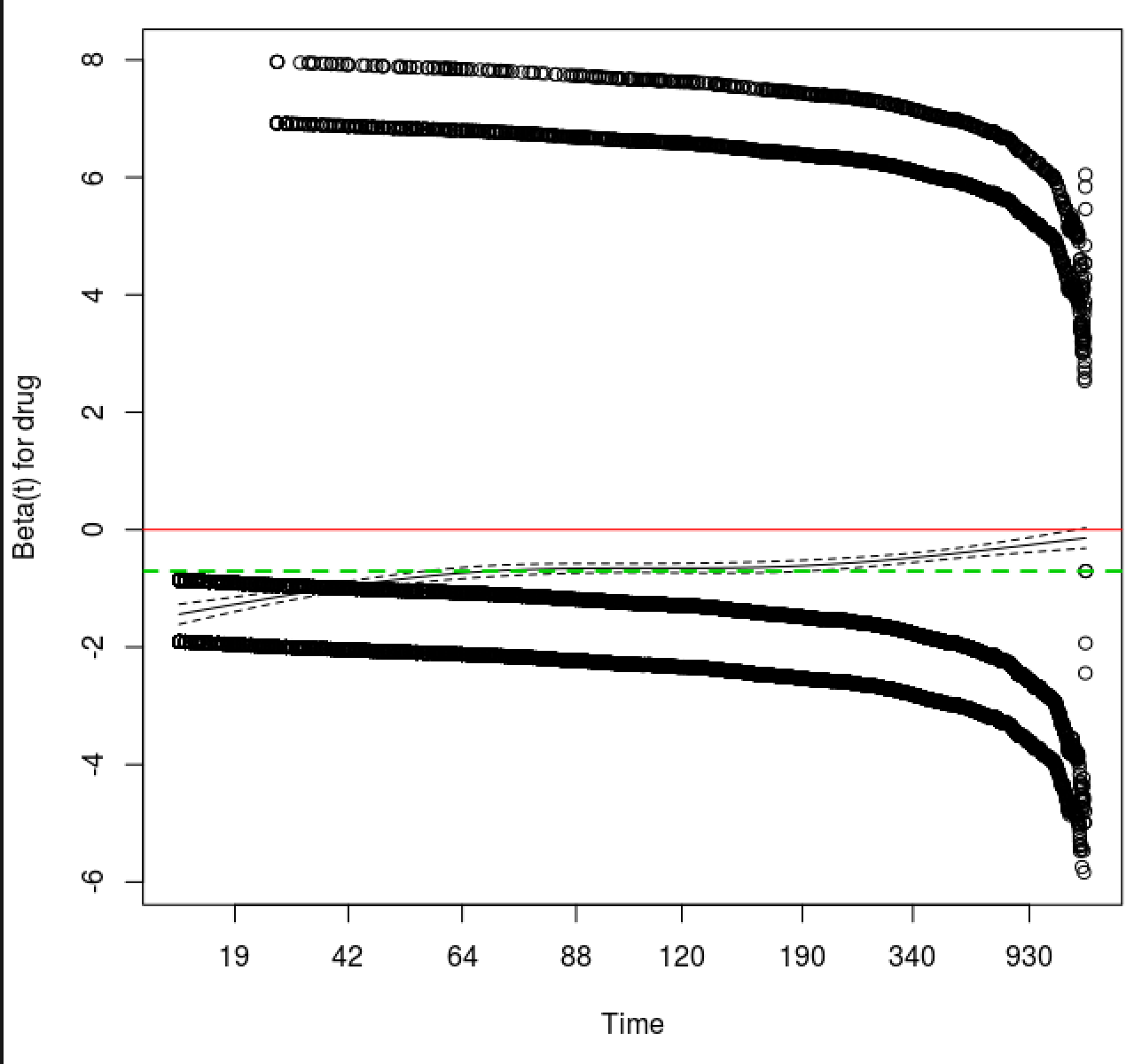 Taking this plot, I cut the survival time at the points at which the beta(t) for drug crossed the coef line (green dashed). I then refit the cox model and tested the coefficients. It appears to work:

Take a look at the residuals points of your corrected plot: they are very skewed. I guess that if you zoom in around 3000, you'll see that the curve is far enough from your calculated beta to interfere with the zph test.

ZPH test, while very useful, should be used with caution though. A bit like normality tests, it can give significant results when there is no problem, and vice-versa, and that is why you look at plots.

But since your residuals interfere with you zph test, they could also interfere with your coefficients. Maybe you could test several time transformations and check if your betas change a lot when your plot changes significantly (like between you normal time and your corrected time). If not, I guess it could mean that the model is robust to the PH assumption. If yes, I guess you will have to find a better time tranformation function. But again, there is no real consensus on what to do here that I've heard of.

When you look at your first plot (without time transformation), it seems that drug effect is different before and after time 75. As you can see on this excellent link, you could thus use a "step function" (chap 4.1, page 17) to estimate a different beta for these two periods.

With this function, this would translate as:

As you can read in the pdf, the value of 75 is quite arbitrary and testing the significance of the difference between $beta_{drug}$ and $beta_{tt(drug)}$ is difficult.

4
Why do coxph() and survreg(, dist="exponential") NOT return the same coefficient (except for expected opposite sign) in R?
1
Is Cox PH model still applicable when proportional assumption is violated for treatment effect?
3
Consequences of violating proportional hazards assumption in Cox model
0
Possible time-dependent mediation effect in Cox regression
5
How to make predictions with time-dependent covariates with Cox regression
0
What is the dependent variable in a coxph regression in R?
0
Cox Proportional Hazard model (Time dependent covariates) in R