In Chapter8 of this great book, the authors build a Bayesian model and use 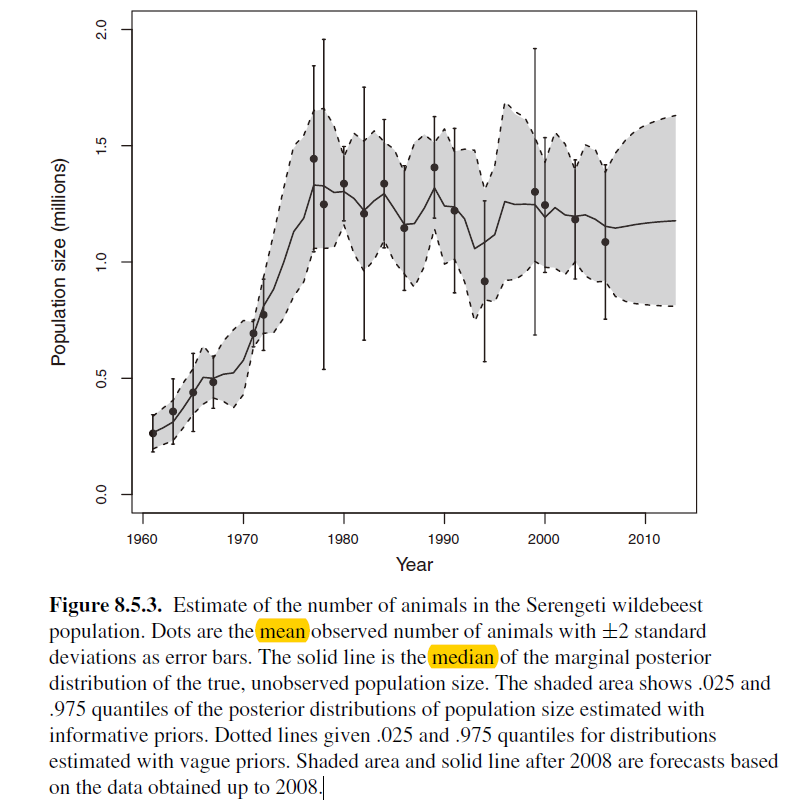 to show the posterior distributions of the latent state $N_{t}$ and its credible intervals. The model is written as below:

where: $N_{t}$ is the unobserved, true abundance of wildebeest in year t; $x_{t}$ is a measure of the annual rainfall; $\beta$ is the coefficients; $\sigma_{p}^2$ is the process variance; $\sigma_{data,t}^2$ is a variance for the total population based on the sample of paragraphs.

(2) The authors remind us that:

The fit of the model medians is not smooth but, rather, tends to jump a bit between time steps. ... if we assumed that observation variance was 0, such that the true state was exactly the same as the observed state, then the medians would go through every data point.

Then they emphasize that:

It may be counterintuitive that a model like this one that does hit every point, or close to it, is probably not a very good model. What this says is that process variance is high relative to observation variance. The predictive value of such a model will be low.

Why would the solid line go through every data point if the observation variance was 0?

Regarding the second question, it might be helpful to remember that there is an estimation procedure involved. If the variance of the measured data drops to zero, there is only one estimation result possible -- the one that is exactly the same as the measured one. This is a feature of any estimation procedure that accounts for the variance of observations. This however is absolutely no indication of whether it is a "good" model.

For the first question, I might need to edit/delete the next part of my answer: There might be some information missing or being assumed about the true and unobserved (unobservable!) population size. My guess would be, that the quantiles of the median are either smaller or better defined than the mean and its variance. It might even be, that the mean cannot easily be calculated in this particular case. However, for the estimation procedure (the original task) it makes no difference what the plot is showing.