Checking of Measurement in Grouped Data

My teacher uses the formula below when looking for the median and mode of a grouped data.

I am so sorry about the format, I am using the mobile app and have limited access on tools upon writing this.

Where the value of $n/2$ that matches or in range in cumulative frequency of the group data will be the median class.

Where the $f_m$ or highest frequency will be the mode class.

I am only showing this as a reference as I found different ways of solving the basic measures of a grouped data.

My question is, is there any possible way of telling whether you got the right answer? A checking or signs that you got it right? The same way how you check the sum by subtracting the sum and the value of one of the summand to get the value of other summand. Thank you so much.

Note that the meaning of $m$ is different in each formula.

Regarding the verification of your computations, a few checkpoints might be useful:

My interpretation is that by 'right answer' you don't mean whether you computed the formula correctly, but whether correct answers from the formulas match the median and mode of the sample or of the distribution from which the sample was drawn.

Sample. The median of a sample is the middle value of the sorted data for samples of odd size and the average of the middle two values for samples of even size. If you have the actual sample values (before binning) that is easy enough to find. For a sample with tied observations the mode is defined as the most frequently occurring value (if there is one). But for samples from a continuous distribution (where any ties occur only by rounding), I know of no 'official' definition of the mode of a sample, but more on that later.

Here are two histograms of the same dataset of size $n=100$ with somewhat different choices of intervals. Accordingly, your formulas will give somewhat different answers. [From your formula, I got about 16 and about 15, respectively. You can use the counts atop histogram bars to check my answers.] The true median of the 100 observations is 16.52 (rounded to 2 places). The modal interval is $(10,20]$ in the top histogram and $(10,15]$ in the bottom histogram, so your formulas will be looking for the 'mode' of the sample in two different intervals. [From your formula, I got roughly 15 for the mode from both histograms.] 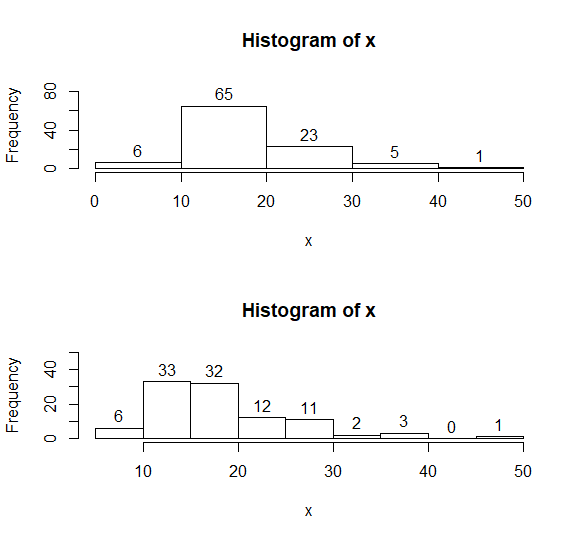 A histogram is one way to get a rough idea of the shape of a population density function, and your formula tries to give a value for the mode that matches that density function. Usually, a somewhat more accurate method is to use a kernel density estimator (KDE). The figure below shows a the second histogram of the data along with the KDE from R statistical software. By looking at the KDE a little more closely, we can find that its maximum value is at about 15.3.

Of course, if the goal is to use a sample to estimate the median and mode of a population, a larger sample will tend to give better results than a smaller one. The figure below shows a histogram of a sample of size $n=2000$ from $\mathsf{Beta}(6,\,1/3),$ along with the population density function (black), and the KDE of the sample (red).

Not the answer you're looking for? Browse other questions tagged descriptive-statistics median mode central-tendency checking or ask your own question.

94
Essential data checking tests
1
Median and mode
1
What's the definition of multivariate mode?
0
Is mean or median a better way to find central tendency of a season of television?
3
Why is the center of data important?
1
What is the mode in a multimodal data set?
2
Checking model, the same variance, in one-way ANOVA test