Which pdf to choose for the prior of an angle?

I have a system in which one uncertain variable is a direction in two dimensions. If I want to define a prior for this, is there an elegant way to reflect the fact that the parameter space dimension for this variable is circular (i.e., the distance between 359.9 degrees and 0.0 degrees is less than 359.9 degrees and 300.00 degrees)?

I can think of some janky solutions with coding (reflecting values outside the bound of 0 and 360 back to the other end), but is there a space in which this solution is more elegant? And which prior should I use if I want to reflect e.g. a quasi-Gaussian preference for a certain direction?

bayesian density-function prior
Share
Improve this question
asked Jan 16, 2020 at 9:52

C.f. this answer by StasK

The most obvious thing to do here would be to express the variable in polar coordinates and impose a prior on the angle and displacement. That is, you express your point $(x,y)$ as a vector $(\theta,r)$ where:

You can then impose a prior on $0 \leqslant \theta < 2 \pi$ and $r \geqslant 0$, and this will create an implicit distribution on the vector $(x,y)$. In the absence of information about the angle, you could use the non-informative uniform prior $\theta \sim \text{U}(0, 2 \pi)$ for the angle, and then choose an appropriate prior for the displacement $r$.

Regarding the distribution to use, if the variance is sufficiently small, I see no reason not to use Gaussian. If the small probabilities at the tails disturb you, you can try beta distribution (properly scaled, so that it covers your angle range), with $\alpha = \beta \ge 1$. For $\alpha = \beta = 1$ you'd get the uniform distribution. However, if your variance is large, so that the the process which generates the angles can generate values $> 360^{\circ}$ and $< 0^{\circ}$ with a non-negligible probability, then you are in trouble. You can wrap the Gaussian distribution so that its support is $[0, 360)^{\circ}$, but its PDF is not too handy (having an infinite sum of $\cosh$'s as a term, if I did my algebra correctly). The curve resembles a raised Gaussian: 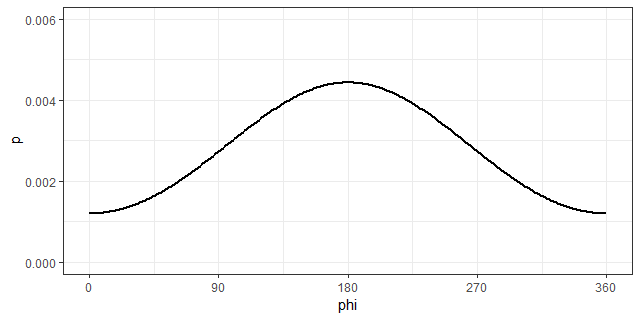 but mathematically it is different.

Not the answer you're looking for? Browse other questions tagged bayesian density-function prior or ask your own question.

5
What is the name for this distribution defined on a circle
1
Can we sample from the wrapped normal distribution and evaluate the density of the sample simultaneously?

2
Which pdf is this?
7
How do I choose parameters for my beta prior?
23
How to choose prior in Bayesian parameter estimation
1
Derive the conditional pdf of data on prior parameters
3
Is an improper prior/posterior equivalent to an undefined PDF?
2
How to include prior information about target pdf in MCMC
4
Highest probability set and density ratios equal to probability ratios
3
Choose right pdf for lightning strike simplification [Exercice Question]