I have been going through the tutorial by the author of the conjoint library in R (Tomasz Bartłomowicz) which can be found here. Specifically I have been going through example 1 (Ice Cream) and trying to replicate it in SPSS. I succeed in getting the same results in terms of coefficients and intercept values in both. However the standard errors reported in R differ from those reported in SPSS. Why should this be, considering the analysis is done on the same data set? 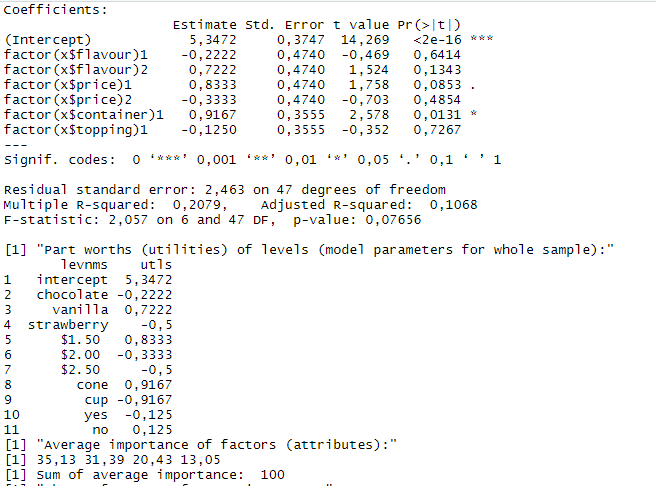 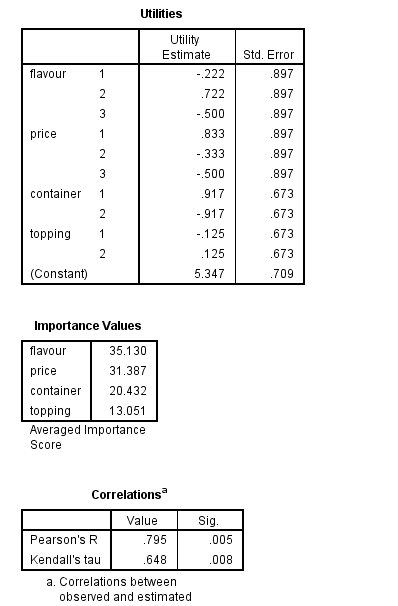 The R implementation seems to be giving results for the separate subjects stacked on top of one another and run in a single regression using all 54 observations (nine from each of the six subjects).

In SPSS, the overall results are equivalent to averaging the data (after transforming rankings to scores) across subjects and running a single regression, with nine cases. This accounts for the larger standard errors.

The equality of the regression coefficients is due to the orthogonality built into the design. You can stack the data and run one regression on all 54 observations, you can run the model for each subject individually and average the coefficients, or you can average the scores and run a single regression, and all will give the same coefficient values.

Note that this is not true of the importance values, which have to be calculated separately for each subject and averaged over subjects to get reasonable values.

Not the answer you're looking for? Browse other questions tagged r spss conjoint-analysis or ask your own question.

3
Using conjoint analysis for price elasticity
5
Assumptions and contraindications of conjoint analysis
1
Interpretation of coefficients in multiple regression without intercept
3
For a conjoint analysis in SPSS, I have 16 cards, but some combinations are unrealistic. Do I still include them in my survey and analysis?
3
Conjoint Analysis - Incorporating individual-specific intercept
2
Estimation of a VEC model in R (standard errors)