I'm learning of Gaussian Processes (GP) in the context of Bayesian Optimization (BO), where a surrogate function is learned to approximate the reward signal then a (hopefully) global optima is selected. Because GP are the backbone of BO, I'd like to get a better feel for what it's all about. Thus far, I've heard two explanations:

These definitions don't seem to agree with one another; however, there's one thing they agree on: The kernel choice and hyperparameters are the most important elements of the GP.

Here's how I currently understand GPs:

Could someone comment on how far this is off from reality? (If quite far, please provide an explanation.)

A stochastic process $X(t), t \in T$ is a Gaussian process (GP) if $\sum_i a_i X(t_i)$ is a Gaussian random variable for any such linear combination. Equivalently, it is a GP if all its finite-dimensional distributions are (multivariate) Gaussian, that is $(X(t_1),X(t_2),\dots,X(t_n))$ is Gaussian for any choice of $\{t_i\}$. Usually, one in addition requires that the sample path $t \mapsto X(t)$ be continuous. This way you can view a GP as a random function in $C(T)$ the space of all continuous functions on $T$.

This is all good, but what does a GP look like? I mean, how do we even sample from a GP and what do the functions we sample from look like? How can we output an entire function every time we sample a single element from GP?

There is a very powerful result that allows us to give a nice answer to this question. To make it simple, I am not going to worry about mathematical rigor that much (maybe a little bit!). Here are a couple of observations:

Here is some code to draw two samples from this random function:

And the resulting plot: 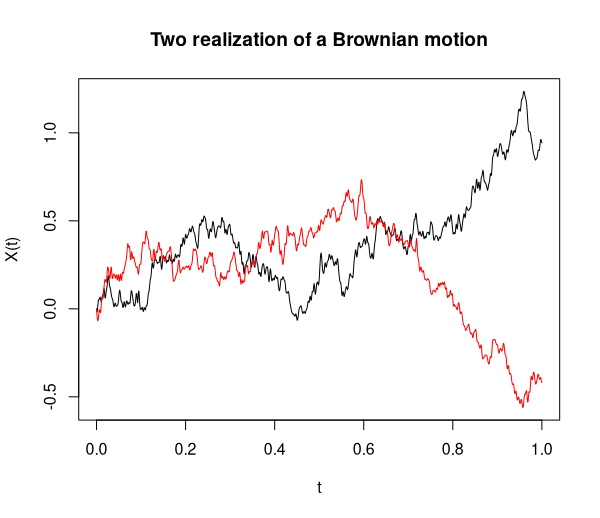 The rest of the story

Another closely related approach is to perform eigen-decompisition on $\Sigma = U \Lambda U^T$ where $U = [\mathbf u_1 \mid \mathbf u_2 \mid \cdots \mid \mathbf u_n]$ is an orthogonal matrix whose columns are the eigenvectors of $\Sigma$ and $\Lambda = \text{diag}(\lambda_i)$ is the diagonal matrix of the corresponding eigenvalues. Then, we can generate $\mathbf x = \mu + U \Lambda^{1/2} \mathbf z$ (verify that this has the right distribution!). If you expand this equation you get $$ \mathbf x = \mu + \sum_{i=1}^n \sqrt{\lambda_i} z_i \mathbf u_i $$ which is just the finite-dimensional analog of the K-L expansion.

You are given points sampled from a function, that is not known, this is your data. Traditional curve fitting algorithms would try to find a function that fits the data the best. Gaussian process learns distribution over functions, i.e. you could sample from this distribution the functions that are consistent with the data. This distribution is defined in terms of mean function and covariance function, they are defined in terms of kernels. Kernel can be thought as a measure of similarity between points, so it forces the Gaussian process functions to be more similar for points that are similar to each other, and can be dissimilar for points that are less similar to each other.

When using Gaussian processes in optimization, we use it as a surrogate model, so instead of optimizing the target function, we optimize the function approximated by Gaussian process. We do this when it is expensive to evaluate the target function, for example, it is a neural network that is expensive and takes long to train. Instead we approximate the function. Since Gaussian process, because of being defined in terms of kernels, it is more uncertain for the areas where it saw less data and more certain in areas with more data. Thanks to this, you can optimize, or sample from the distribution, by taking into consideration the uncertainty. You want to explore areas that you are uncertain about.

Not the answer you're looking for? Browse other questions tagged bayesian gaussian-process bayesian-optimization or ask your own question.