I am occupied with ARIMA modelling augmented with exogenous variables for promotional modelling purposes and i have hard time explaining it to business users. In some cases software packages end up with a simple transfer function i.e. parameter * Exogenous Variable. In this case the interpretation is easy i.e. promotional activity X (represented by the exogenous binary variable) impacts the dependent variable (e.g. demand) by Y amount. So in business terms we could say that promotional activity X results in the increase of demand by Y units.

The parameters of a relevant model and the related transfer function are presented below:

So i guess that if we do a promotional activity this period the level of demand will increase by 30 units. Also since there exists a transfer function (division of polynomials), the promotional activity will have an impact not only to the current time period but also to subsequent periods. the question is how can we find how many periods in the future will be impacted by the promotional and what will be their impact per period in units of demand.

It might help to put your coefficients in an equation format as shown below. Also consider $Y_t$ as Sales and $X_t$ as promotion/advertisement at time $t$ for easy understanding.

Applying your coefficients to the above equation translates to:

I used SAS to do most of my calculations(see this website). Now performing recursive calculation on the first part of equation as noted in the website translates to the following figure. What this tells you is that Advertisement at time $t = 0$ causes 30 incremental units in Sales all things being equal. This advertisement also has an effect in subsequent periods example at $t = 1$ the effect is 7.5 incremental units, and so on caused by denominator coefficient $\delta = 0.25$. 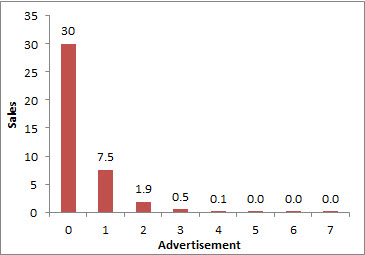 Combining all the 3 parts of transfer function additively using basic algebra translates to the final form as shown below:

Lets see what happens if you change the denominator coefficient from 0.25 to 0.70 and keeping the numerator as 30. By the way the following equation is a simple form of transfer function that works very well in practice is also called infinite distributed lag model or Koyck lag model.

This would be represented as the following figure, as you can see the decay is very slow due to the decay factor increased from 0.25 to 0.70. 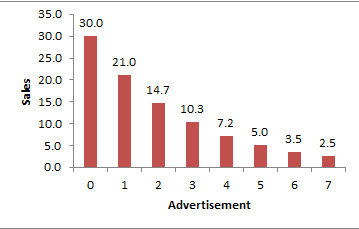 Hope this is helpful. I have learnt thru experience that visualization is the only way you can explain transfer function to a non technical audience including me.A practical suggestion, I would recommend conducting experiments on data due to the fact that this could be just illusions as noted by Armstrong. If possible, I would do experimentation of your "causal" variable to establish the "cause and effect". Also I don't know why your numerator 3 is -1.62, it could be just spurious.

Please provide feed back if you find this post useful as it took some effort to respond to this answer.I learnt the visualization of transfer function in this website thanks to @javlacalle.

In many circumstances that I have consulted on, there often is exceptional activity before the promotion reflecting lead effects. Automatically/routinely detecting this phenomenon is critical to good model development. Additionally Pulses, Level Shifts, Local time trends need to be considered otherwise they thwart/distort the analysis. We have also found that although differences might be necessary to identify the Transfer Function, they are not necessarily part of the final model. This and other points were not addressed in the seminal work of Box and Jenkins but are now routinely addressed . If you wanted to post your data I and others might be able to help elucidate on that while also investigating any necessary transformations such as power transformations or weighted least squares. I have used software which restates the Transfer Function as an ordinary regression (Polynomial Distributed Lag / Auto-regressive Distributed Lag ) model. This is very useful in explaining the model to customers/clients and also useful in subsequent utilization of the equation .

. Expressing it as a "regression model" we get 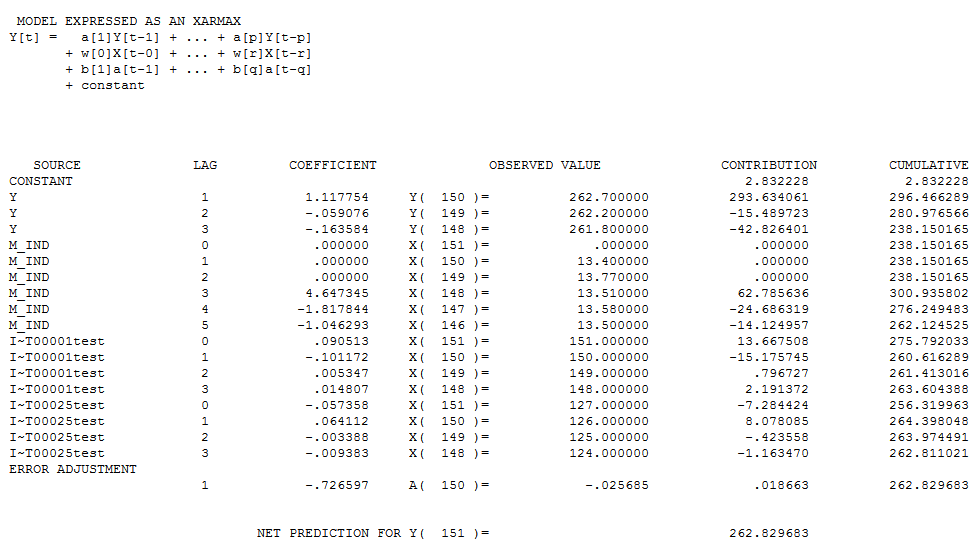 Not the answer you're looking for? Browse other questions tagged time-series data-visualization forecasting arima causality or ask your own question.

41
Detecting Outliers in Time Series (LS/AO/TC) using tsoutliers package in R. How to represent outliers in equation format?
14
Residual autocorrelation versus lagged dependent variable
6
Measuring length of intervention effect
5
How to use Dynamic Regression models in R to forecast future sales
5
Dealing with spikes in data
8
Multilinear regression vs. Time Series
2
Should I make a time series stationary before passing it as an input for ARIMA model?
3
Time Series Forecast / Transfer Function
4
Intervention analysis and forecasting in this type of data
4
Which test for lagged effect of one time series on another?
See more linked questions