What does a Barplot, a Boxplot and eCDF represent?

I want to understand what a barplot, boxplot, and eCDF represent when they are used for plotting data.

Unfortunately, I have very little knowledge of statistics and probability so a simple explanation is very welcome.

Also if you can suggest some introductory resources (website, book, online course, tutorial) for statistics and plotting, that would be helpful.

Also, is there a rule-of-thumb for deciding which type of chart/plot to use for a specific type of data?

Since you say you follow the barplot, I'll focus on the other two.

There are many different definitions of boxplot in current use, though they're all pretty similar. I'll describe Tukey's version of the boxplot in rough terms.

A boxplot grows out of a five-number summary, which consists of the median, the quartiles (Tukey called these the hinges and gave them a particular definition which doesn't influence our interpretation of them) and the extreme values (the minimum and maximum). These 5 numbers split the range of the data up into 4 pieces that have about 1/4 of the points each:

As the name explains, this acts as a summary of the data:

However, it's hard to visually distinguish each one. To emphasize the central portion, we can mark it out with a box. Tukey called the horizontal lines either side of the central box "whiskers".

Some trivial details aside this is presently essentially the range plot (or "range bar") given by Spear in 1952:

(though there are several earlier antecedents which are also boxplot-like displays).

Tukey modifies this "five-number summary" version of the boxplot a little - he draws the whiskers only out to the most extreme points inside 1.5 x the width of the box above and below the box-ends, leaving the points outside them marked individually (in fact he distinguishes those into two groups, but let's not worry about that right now).

For our data there are no points outside those limits, so we get the previous display, which is essentially that five number summary:

This summary tells us a little about the distribution of the data - its center, spread and range. It's possible to discern something of how skewed and heavy tailed the data may be as well, but details like multimodality are completely lost.

We can see a variety of things, for example -- the median is around 9.5, that half the data lie between about 8.5 and 13, the data are mildly right skew, and that the data range from just above 6 to somewhat over 18.

When looking at a single sample, there's no need to summarize the data down to only a few numbers; it's more informative to keep the whole set of values.

However, when you're trying to compare many distributions, the visual summary of center, spread and range can be much more helpful. 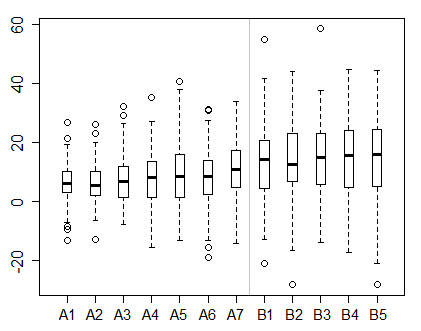 You can find any quantile by reading across from the y-axis and dropping down, and you can find where any x-value lies in terms of what percentage of the data lies at or below it (sometimes called percentile rank) by reversing the operation: 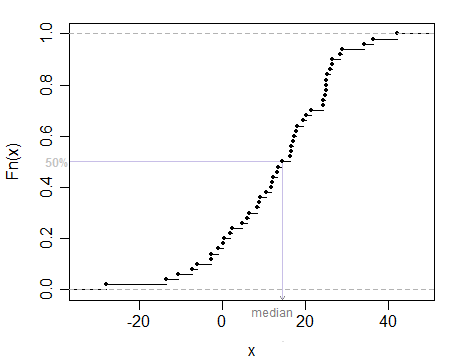 The ECDF is not a summary, it contains all the information in the original sample, displayed in a particular way. It's useful for looking at a single sample, or maybe for comparing a couple of samples, but if you have more than a few ECDFs it can become hard to compare them.

A barplot is for comparing counts in nominal or ordinal categories.

A boxplot is mostly for summarizing a distribution down to a few numbers, which may help when comparing data from many groups.

An ECDF is a complete description of a sample in the form of a function, in such a way as to indicate the proportion of values up to each point.

This document covers box & whisker plots & many other statistical analysis. It is based around hydrology but much of the information might be helpful. It's not introductory, but does a fair job of explaining why you would use certain plots, tests etc.

Not the answer you're looking for? Browse other questions tagged data-visualization boxplot barplot empirical-cumulative-distr-fn or ask your own question.

22
What are some alternatives to a boxplot?
12
What is a 'bagplot', or 'bivariate boxplot'?
0
Represent data across multiple categories and sub categories
3
Explaining a boxplot and providing a reference in a technical paper
15
"When to use boxplot and when barplot" rules (of thumb?)
4
Visualizing composititional time series with negative values and meaningful totals
1
How does boxplot in R calculate quantiles?
2
Boxplot interpretation
13
Why does ecdf uses a step function and not a linear interpolation?