Random walk on the edges of a cube

An ant is placed in a corner of a cube and cannot move. A spider starts from the opposite corner, and can move along the cube's edges in any direction $(x,y,z)$ with equal probability $1/3$. On average, how many steps will the spider need to get to the ant?

(This is not homework, it was an interview question.)

I suggest modeling the problem as a Markov chain where each state represents the distance between the spider and the ant. In this case we have 4 possible states $S_i$ as the distances $i$ can be $\{0,1,2,3\}$.

When the spider is at the opposite corner of the cube, it is at a distance of 3 steps from the ant. It is in state $S_3$.

To get the number of steps until being absorbed, just sum the values of each row of $(\mathbf{I}_t - \mathbf{Q}_t)^{-1}$. This can be represented by

where $\mathbf{1}$ is a column vector with all components equal to 1.

Let us apply this to our case:

The expected number of steps from state $S_3$ to state $S_0$ is given by the first component of the following vector:

The second and third components of $\mathbf{t}$ are the expected number of steps to $S_0$ if we start from $S_2$ and $S_1$ respectively.

One nice abstraction to think of it is this:

So the formula for the expected average number of steps is:

I don't naturally think of these kinds of problems as matrices (even though they are). I have to draw it out, which I've done below. You can see that there are 3 places to move from S, all of which are As. From any A, you can either return to the S, or move to one of two Bs. From any B, you can move to the E, or to one of two As. This all translates to the transition matrix given by tiagotvv, which can also be drawn in graph form.

Because I am terrible at math, I would just try to simulate your problem. You can do this with the markovchain package in R. 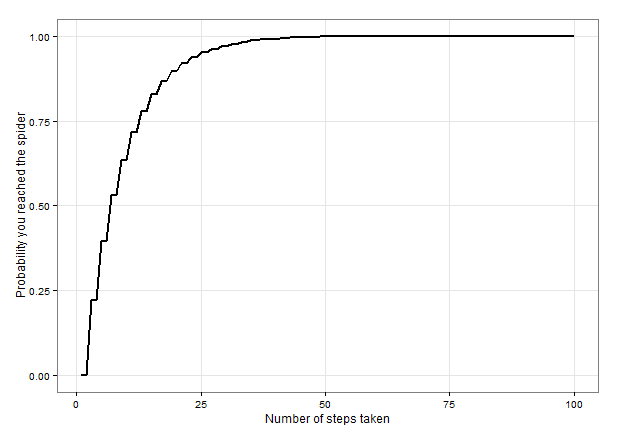 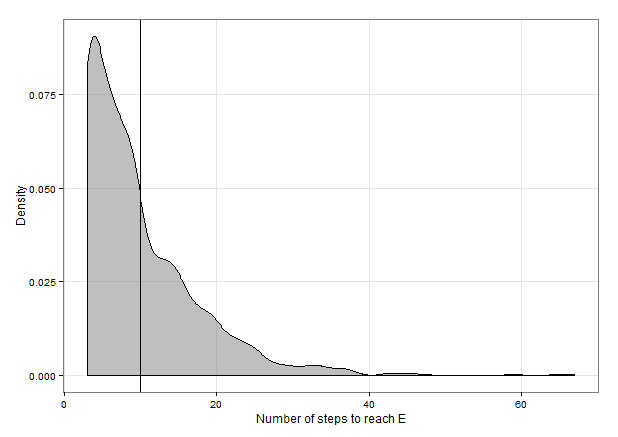 tiagotvv's answer can be calcuated in R as:

Initially the spider has made zero moves in any of the three directions, so the parity for each direction is even. All three parities need to be flipped to reach the ant.

After the spider's first move (let's label that direction $x$), exactly one direction has odd parity and the other two ($y$ and $z$) are even. To catch the ant, only those two parities need to be reversed. Since that can't be achieved in an odd number of subsequent moves, from now on we consider pairs of moves. There are nine possible combinations for the first paired move:

We need to move in the $y$ and $z$ directions to reach the ant after one paired move, and two out of nine combinations will achieve this: $(y,z)$ and $(z,y)$ would ensure all three parities are odd.

The other seven combinations leave one odd and two even parities. The three repeated moves, $(x,x)$, $(y,y)$ or $(z,z)$, leave all parities unchanged so we still require one $y$ and one $z$ movement to reach the ant. The other pairs contain two distinct moves, including one in the $x$ direction. This switches the parity of $x$ and one of the other parities (either $y$ or $z$) so we are still left with one odd and two even parities. For instance the pair $(x,z)$ leaves us needing one more $x$ and one more $y$ to reach the ant: an equivalent situation (after relabelling of axes) to where we were before. We can then analyse the next paired move in the same way. 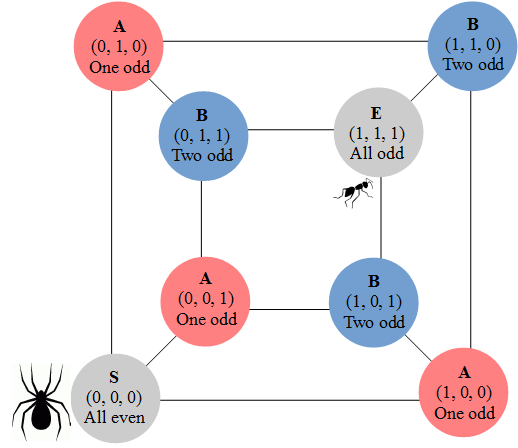 The one-step transition matrix is

The first row show us that after one movement, the spider is guaranteed to be in state A (one odd and two even parities). The two-step transition matrix is:

The second row shows us that once the spider has entered state A, in two moves time it has either returned to state A with probability $7/9$ or has reached state E (all odd parities) and captured the ant, with probabilty $2/9$. So having reached state A, we see from the two-step transition matrix that the number of two-step moves required can be analysed using the geometric distribution as above. This isn't how I found my solution, but it is sometimes worth calculating the first few powers of the transition matrix to see if a useful pattern like this can be exploited. I have occasionally found this to give simpler solutions than having to invert a matrix or perform an eigendecomposition by hand - admittedly something that is only really relevant in an exam or interview situation.

I have written a short Java program to answer your question numerically. The traversing of the spider is truly random, meaning that it can also traverse in cycles before getting to the ant.

However, you did not defined the term "opposite corner", so I have two different scenarios. Opposite as in across the same plane or as across the cube. In the first scenario, the shortest path is 2 steps, and 3 steps in the second scenario.

I hava used 100 million repeats and the results are the following:

EDIT: fixed a typo in the script (and also updated the results) 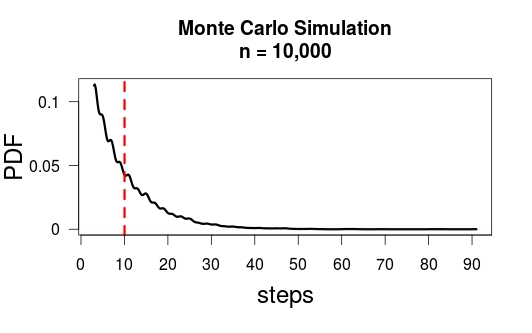 Here is the R code I used:

Not the answer you're looking for? Browse other questions tagged probability random-walk or ask your own question.

26
Amoeba Interview Question
145
Amazon interview question—probability of 2nd interview
7
Define the joint pmf of a particle moving randomly on a grid
1
How can A and B have equal chances to be visited last if A has higher chances to be visited before B?
2
Average time for a random walk on the edges of a cube
0
Confusing in Random Walk
1
Random walk on the edges of a square