Can a forecast that reaches further into the future be less uncertain?

In Austrian television there is a weather show that gives temperature forecasts for the coming 15 days. They usually also provide uncertainty bands around that forecast which naturally makes the statisticians heart leap with joy. There is one thing that bothers me about it, though, and it is perfectly illustrated in this plot (sorry for the poor quality of the screenshot): 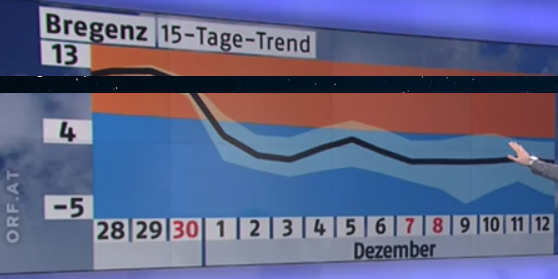 This goes against what I believed to be one of few truths about forecasting, namely that a forecast of the far future should have higher uncertainty than a forecast to the near future.

The questions are therefore:

*I'm not talking about forecasts that exceed a cumulative or natural boundary aspect to them. For example the uncertainty about the temperature in said city in 20 billion years will probably be close to 0 as the world will be dead by then. I think about events that basically don't have their conditions changed in such a manner.

In ensemble forecast, a common technique in weather forecasting, some not-fully-known quantity at the present is varied, creating different initial condition for the forecasting models which result in variations in future forecasts. In that case, the band is not a statistical uncertainty band per se, it's the results of the most extreme models based on assumptions regarding unknown present conditions. Since the model can be complex and takes into account current conditions in other areas on the globe, the result for a particular day in the future may have higher variation than a day farther into future.

Not the answer you're looking for? Browse other questions tagged forecasting uncertainty or ask your own question.