How to tell if my data distribution is symmetric?

I know that if the median and mean are approximately equal then this means there is a symmetric distribution but in this particular case I'm not certain. The mean and median are quite close (only 0.487m/gall difference) which would lead me to say there is a symmetric distribution but looking at the boxplot, it looks like it's slightly positively skewed (the median is closer to Q1 than Q3 as confirmed by the values).

(I'm using Minitab if you have any specific advice for this piece of software.)

No doubt you have been told otherwise, but mean $=$ median does not imply symmetry.

There's a measure of skewness based on mean minus median (the second Pearson skewness), but it can be 0 when the distribution is not symmetric (like any of the common skewness measures).

One way to investigate symmetry is via a symmetry plot*.

* Minitab can do those. Indeed I raise this plot as a possibility because I've seen them done in Minitab. 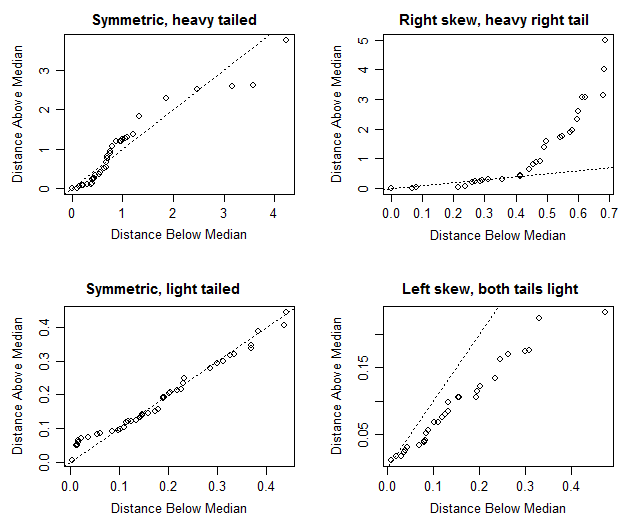 With heavy-tailed symmetric examples, it's often the case that the most extreme points can be very far from the line; you would pay less attention to the distance from the line of one or two points as you near the top right of the figure.

There are of course, other plots (I mentioned the symmetry plot not from a particular sense of advocacy of that particular one, but because I knew it was already implemented in Minitab). So let's explore some others.

Here's the corresponding skewplots that Nick Cox suggested in comments: 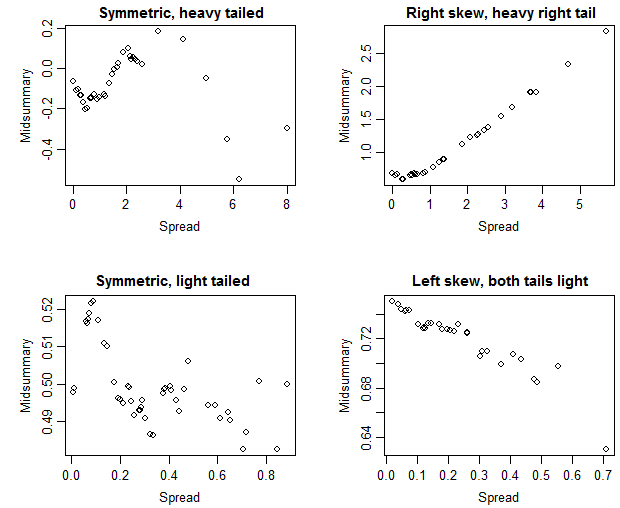 Nick suggests that this plot is better (specifically "more direct"). I am inclined to agree; the interpretation of the plot seems consequently a little easier, though the information in the corresponding plots are often quite similar (after you subtract the unit slope in the first set, you get something very like the second set).

[Of course, none of these things will tell us that the distribution the data were drawn from is actually symmetric; we get an indication of how near-to-symmetric the sample is, and so to that extent we can judge if the data are reasonably consistent with being drawn from a near-symmetrical population.]

The easiest thing is to compute the sample skewness. There's a function in Minitab for that. The symmetrical distributions will have zero skewness. Zero skewness doesn't necessarily mean symmetrical, but in most practical cases it would.

As @NickCox noted, there's more than one definition of skewness. I use the one that's compatible with Excel, but you can use any other.

Center your data around zero by subtracting off the sample mean. Now split your data into two parts, the negative and the positive. Take the absolute value of the negative data points. Now do a two-sample Kolmogorov-Smirnov test by comparing the two partitions to each other. Make your conclusion based on the p-value.

Put your observations sorted in increasing values in one column, then put them sorted in decreasing values in an other column.
Then compute the correlation coefficient (call it Rm) between these two columns.
Compute the chiral index: CHI=(1+Rm)/2.
CHI takes values in the interval [0..1].
CHI is null IF and ONLY IF your sample is symmetrically distributed.
No need of the third moment.
Theory:
http://petitjeanmichel.free.fr/itoweb.petitjean.skewness.html
http://petitjeanmichel.free.fr/itoweb.petitjean.html
(most papers cited in these two pages are downloadable there in pdf)
Hope it helps, even lately.

Not the answer you're looking for? Browse other questions tagged distributions mean skewness median qq-plot or ask your own question.

15
Why is left-skewed called negatively skewed and right-skewed called positively skewed?
5
How do I test for a symmetric distribution?
1
Is there such a thing as a trimmed skewness estimator?
1
How do I know what side is skewed?
0
Measure for how much a data deviates from "perfectly symmetric/ideally distributed" in data's units?
0
Is there any way to mathematically prove skewness?

6
Generate distribution based on descriptive statistics
8
Median + MAD for skewed data
19
How to assess skewness from a boxplot?
4
how to determine skewness from histogram with outliers?
8
Boxplot for data with a large number of zero values
1
A way of median optimization (instead of mean) for skewed distribution in machine learning